It took at least an hour to get back to the Indianapolis Hamfest Saturday.  Traffic was significantly worse than Friday.  The merge onto the freeway is another long, multilane collector, combining an on-ramp from 56th St. (with runs East-West) with an off-ramp to Shadeland Avenue (a North-South road).

When I realized traffic on 465 was all but stopped, I continued on around to southbound Shadeland, congratulating myself on my cleverness and attempting to use the voice input of my smartphone get directions from Google Maps.  --Yeah, me and everyone else.  The Googles weren't responding: overloaded.

It wasn't until traffic on Shadeland slowed and began frantically merging into fewer lanes that I realized the city had checkmated me: there's major construction on Shadeland, too!

Still nothing from my phone, which was very hot and only getting one syllable in three -- incorrectly.  And remember my car's lack of air-conditioning?  I certainly was!  Does it still count as a "glow" when it soaks through your T-shirt?

Okay, fine, the hamfest is at the Marion County fairgrounds, the fairground is off Southeastern Avenue and Shadeland has got to intersect Southeastern.  I don't need no stinkin' map!

Yeah, well--  Got through the construction, made wonderful time for several miles, and darned if Shadeland didn't merge right back into 465 in a confusingly unfamiliar way.  The freeway was at least moving, but very busy.  As I made my way into traffic, I looked over to realize -- too late! -- that Southeastern exited from the very same collector that merged Shadeland onto 465.

It was two miles to the next exit, which was also very busy.  Got turned around and back on the freeway in a mere ten minutes, perspiring freely all the while, and made it back to Southeastern and into the hamfest without further trouble.  Yesterday's tickets were still good; I parked and headed over to the flea market, where a few vendors were already packing up.

Between the flea market and the indoor sales area, I found a few things: 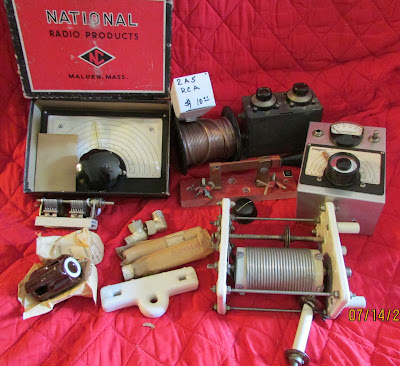 Here's a National ACN "Velvet Vernier" reduction drive dial with spare scales, and some dial scales for the smaller "SCN" as a bonus, all for $5; a roll of speaker wire; an old power pentide tube; a $5 FM/TV tuneable notch filter that, if it works, I'll use at my job (I've got way more than $5 worth of junkbox components from them), a home-made tuneable field strength meter for (probably) six meters with a National MCN dial that I'll probably mine for parts, a dual 100 pF variable capacitor, a knife switch, a set of guy wire insulators, a couple of 90-degree coax adaptors, a set of end and center insulators for a dipole antenna and a variable "roller" inductor, useful in an antenna tuner, though it needs some readjustment. Also found the adptor pictured above.

Started looking through a box of crystals and the seller spoke up: "Make me an offer for the whole thing." 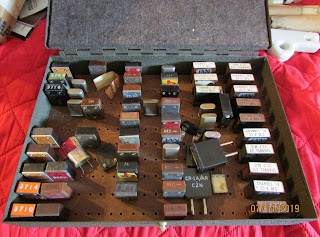 So I did just that and he took it, and for what I was going to pay for a handful of crystals at $5 each, I got a nice WW II storage box, all of the crystals, and one socket adaptor.  I've been stacking crystals in a desk drawer, so this should be an improvement.

The drive back -- oh, I was so clever, I found a better route, Southeastern to Rural (which becomes Keystone because why not?) and back to Broad Ripple -- was about as bad as the drive there: much hotter, mostly bumper-to-bumper and with a long stop for a train.

Got home, toweled off, ordered dinner and went to bed early.

Nice haul. Glad you had good luck at the Hamfest. Sorry about the travel travails.

You’ve done many posts on ham fest visits, and posts about antenna problems, but I can't remember a post showing your home setup.
Any chance for a post on that or can you point me to one?
Thanks,
Overload in CO

Here's a look, many years ago: http://retrotechnologist.blogspot.com/2010/05/hamshack-and-hamming.html

So what part quit in the AC circuit?

The expensive one -- the compressor. I figured as much the first hot day, when I switched it on...and the engine coughed and hesitated. The compressor is seized up. The coolant is lost or ruined, and there's a nifty little trap in the plumbing that wants changed, too.

Hmm Could be the clutch but that is hard to separate from the compressor. Should not be overly expensive to fix. Hard to get the new cars to work with the windows down and 60 mph air. But it is only a few months.

Good luck on it.

It's a Lexus, which runs up the parts cost just to get that stylized L printed on the boxes; the compressor is locked up solid and the coolant has escaped. This kind of failure ruins the refrigerant and contaminates the system in a building-type AC and I have every reason to think the same would happen in a car.

After a childhood spent as one of Dad's pairs of hands working on filthy car engines (etc.) with basic tools and low jack stands, I am not at all inclined to wade in, especially without his knowledge to guide me. The little MGB, with its wide open spaces and simple systems, was exactly as much car as I will work on myself -- and at that, I hired out the trickier engine work, as it takes a better feel for the machine than I've got. The Lexus power plant and ancillary systems are packed under the hood like a jet engine.