And Another Twelve-Hour Day, But...

Yesterday, the crew took the big antenna down.

Since it was mounted about nine hundred feet up the tower, there's no lifting it down with a crane; instead, the tower is "rigged" with temporary "blocks" (think of a pulley on steroids) in interesting and complicated ways, a heavy cable is string up through them, the antenna is connected to the cable with a multi-part sling that hooks into several lifting eyes built into it, and a hoist sitting on the ground chugs away.  A "tagline" connected to the antenna and coming off at an angle to the hoist cable serves to steer the antenna as it is lowered.

Once the hoist has taken most of the weight of the antenna -- but no more! -- men working on the tower remove the multiple huge bolts that have been holding it in place, and if everything works out (there's a lot of radio chatter and specialized gesturing), the antenna is "floating" as the last bolt is loosened.

Ours jumped a little when the final bolt was taken out -- less than a foot -- and the riggers were able to carefully push it away from the tower.  The first steps of the lowering process proceed with painful slowness; a mistake here could cost fingers, hands, limbs or lives.

As the antenna begins to move down, strain is applied to the tagline.  Riggers keep pushing the antenna clear of other structures on the tower and if the angle of the tag and hoist lines was correct, by the time it's too far away from them to reach, the antenna is clear of everything on the tower.

Don't forget, the antenna has to kept clear of the heavy guy cables, too!  This is trickier while it's close the tower; as it is lowered, there's more room.  But you can't move it too far out -- towers are designed to withstand huge vertical forces; the lateral loads one them are much lower, largely the result of wind.  It's much more than you might think,. but not so much you can hang a 1,300-pound antenna hundreds of feet away from the tower while raising or lowering.

It all calls for a lot of planning and well-informed, experienced judgement before the work ever begins.  Mistakes here make headlines.
This effort made no headlines; once the antenna was out of reach, the men working aloft rode the elevator to ground level, arriving at when the antenna was about halfway down, and went out to the area where the tagline turned skyward.  One of the ground men fired up a small tracked forklift (a large "Bobcat" with forks) and as one end of the antenna touched down, they steered it to a gentle landing, cradled across the forks.

Unrigging the antenna and securing the cables for next week's work only took about 45 minutes.  Taking care of some four thousand feet of cable, strung through blocks 950 feet above ground, is not quite like running out a clothesline! 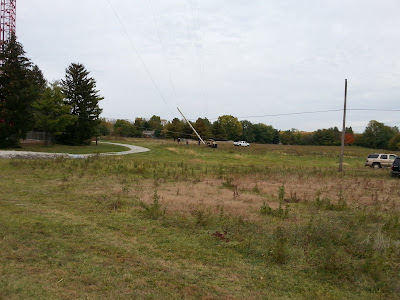 It was just about full dark by the time everyone was finished.  Rain today and on Sunday?  More work, raising a smaller replacement.
Posted by Roberta X at 8:16 AM

Thanks for the post and the pictures. Neat! Glad everything went OK.

I've been the anchor on a tag line when bringing down an amateur antenna and mount from a commercial tower (about 600 FT IIRC). Not something I want to repeat regularly.

is that antenna junk, or will it be refurbished and reused?

That is awesome. I wouldn't get very far up before I began to emit noises that sound exactly like a terrified little girl.
I admire those who can do the work, but I won't be joining them.

Merle, the antenna is on a TV channel that will eventually not be a TV channel; they sawed off the UHF band and sold the top half to cellular-phone companies. The antenna is scrap and we hope to get paid a little for it. There's a lot of aluminum there.

It's a bit of a scam, but what I've run into when selling scrap aluminum is being told that any hardware attached will drop the price about by 1/2. This, of course, after the material is already added to the bins and not recoverable. The claim is that it contaminates the melting pot, which is bull. That was a pickup bed full of large (3x4ft) castings, with a couple of studs still threaded into them.