Tam and I took a long walk to Good Morning Mama's   It was full and running over, people waiting outside.  So we walked on around the corner to Gallery Pastry Shop.

They were busy too, but they're fast. Oh, it's a high-end kitchen, very high end; they make pastries the likes of which are hardly to be believed, food art that is as pretty as it is delicious.

Weekends, this level of skill and organization is applied to omelet, crepe and scramble brunches.  I could watch their kitchen crew all day long. It's really amazing -- the work space is very well organized and their prep is fantastic, but the smooth coordination of effort and clear chain of command is simply remarkable. 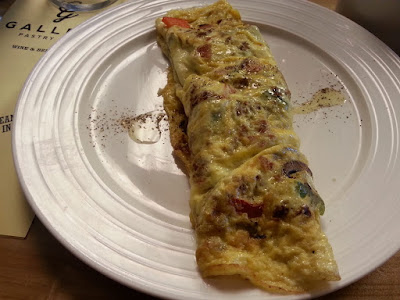 It's not really a large kitchen, given that a chef de cuisine, sous chef and one of the chefs de partie are presiding over a row of nine single-burner countertop "stoves" that face a bartop from behind clear barriers, while at least three more chefs de partie work at a huge square table in the background.

Filled-out orders come to the chef de cuisine, who lays them on a set-aside section of countertop in chronological order and parcels out work to himself or the other two front line chefs; ingredients are staged between the burners and clear barrier, a full set taking up just three burner's worth of space.  Behind them on the work table, stacks of clean plates and crepes are ready to go, and a couple of big chef-grade blowtorch-like gadgets are stashed where they're out of the way but reachable.  Ingredients are cooked, omelets made, and plated; the three back-row chefs compare orders to plates, load and torch-crisp crepes, and do any prep work that needs done.

Fresh skillets are kept in under-counter bins in front of the front-line chefs, and they swap out as needed.  Everything is within arm's reach, including a fridge full of prestaged ingredient containers to replace any as they are used up; a dishwashing setup at the very back of the room (on the other side of a row of specialized pastry ovens and other mysterious machinery) is in frequent use by any chef presently at loose ends.

Waiters and waitresses dance in and out on a route that takes them in to the chef de cuisine's incoming order area and out past the row of filled plates ready to go, out of the way of the routine motions of the chefs.

--And the big boss chef chef de cuisine is not at all above rinsing out a pan or four if he finds himself temporarily free of other duties. There's a definite heirarchy but there's a lot of trust, a real feeling that everyone in the kitchen is a professional who can be counted on to carry his or her share of the work.  It's a pretty "flat" power structure.

There's really a lot to be learned by observing the staff do their jobs -- rapidly, efficiently and to a standard very few can achieve.
Posted by Roberta X at 8:07 AM