Eleven of the gun-blogosphere attended: nine bloggers, two readers. The Broad Ripple Brew Pub graciously allowed us to sit outside (as long as we didn't move the tables to make one long one). Thusly: 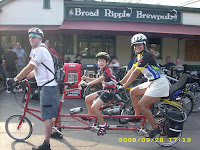 The discerning eye -- or, for that matter, a blind sow -- might notice a few bicycles in the foreground (and while none of us rode to the blogmeet, some of the more tactikewt had been riding just before). But this is Broad Ripple; we don't just have ordinary bikes!
Some children have training wheels. Others, well, Mom and Dad are certainly fit enough to be trainers! It's a delightful bicycle though, like many another large family vehicle, parking can become something of an issue.
Those who think bloggers and friends are a retiring lot, think again! Thirdpower made it to the Blogmeet, all the way from behind Illinois lines! We were all happy to meet him and all the more so when he handed out the latest (Army green) edition of his famous gunblogger's patch. Another first-time attendee was longtime blog reader and comment, Rob D, a charming conversationalist in person. Turk Turon's caravan hit town just in time for bowling pin shooting yesterday and we were able to find a livery stable that'd accomodate the camels; in contrast, the Old Grouch has mastered the art of just appearing, in much the manner of a cat at dinner time. Shermlock Shomes, Brigid, James Rummel, Caleb, Tam's shootin' pal, Tam, and Your Correspondent round out the party -- and a party it was. We started at three; along about seven, most of us had wandered as far North as The Art Center and made our meandering way from one end of the sculpture "Confluence" (a flat, canoe-shaped slab of limestone near the riverbank) to the other, an arrangment of limestone menhirs comprising a boat cage over a block away (Psssst! Mister Artist? The stone raft escaped): 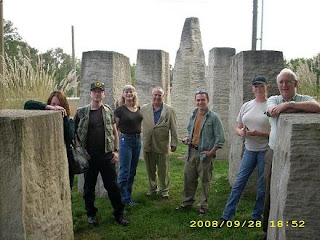 Let's see: Zoe, Jayne, Kaylee, Mal, Wash, Inara, Book...? I don't know, but if you look close, you can see some of our crew are "armed" with telephones and multitools, just in case those standing stones make a threatenin' move!

There's plenty more to relate from the weekend but, alas, not time enough this morning. Still to come: Pinshooting with a Spanish bargain, a 19th-Century Rhetoric and Composition text at a hamfest (and what came of it) and why everyone should eat breakfast at Taste at least once. Also, fine coffee, smuggled in on camelback!

Email ThisBlogThis!Share to TwitterShare to FacebookShare to Pinterest
Labels: BlogMeets, Food, it's Art okay?, the wonderfulness of you, things that go bang

We were really going to try & make this one, but while away saturday, the trenches were dug for the new schoolhouse, & I was attempting to dig out under the house acess for the water & elect lines. After about about 5 hrs of digging, it was decided to rent a jack hammer

Sorry I missed it! (Spent the day hand cutting window trim and helping a friend wrench on his CB750)

I feel bad about having to leave early and missing the trip to the Art Center and the menhirs. Of course I might have been tempted to go for a "Who's Next" sort of shot. ;)

Damn, I hope I can get my ass down there to hang out with the cool kids again.

A splendid time was guaranteed for all!

It was a great time, as always, and new people make it even better.

... and, yes, you are definitely Kaylee.

Hey Roberta, great time as usual, and I stole your photo!

I had a great time and was absolutely delighted to meet all of you. Good conversation, good people, good beer, and good food. I am looking forward to next time!

All that picture needs is some pee stains on the monoliths in question.

Sorry I missed it, but I had soybeans to haul to the elevator. It's that time of year for me. Maybe when harvest and fall work is completed I can join the cool kids in Indy.

oh, we are SO there in October.

If Breda can make the trip I can drive up from Cincy.

Glad to see you all had fun!!

She is related to Wilson from the "Home Improvement" show (Tim Allen's next door neighbor). I thought everyone knew this... :)