Yes, no new post this morning.  Along about tooth-brushing time, I discovered I had either lost a filling or a piece of a tooth had fallen out, on the back of one of my upper front teeth, and it's been quite a distraction.  Then I arrived at work to discover the drains are stopped up, so I did a few quick tasks and picked up some things I could work on at home.

My tooth will be looked at Friday afternoon, or sooner if it starts to hurt.  There's no ETA on the drains.

Email ThisBlogThis!Share to TwitterShare to FacebookShare to Pinterest
Labels: Geekery, marvels of nature, marvels of science 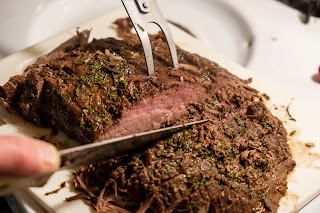 Parsley, garlic, a little olive oil...  I had marinated the flank steak in a small amount of balsamic vinegar and togarishi salt, and I added to some za'atar seasoning, bay leaf, soy and fish sauce to the pan. 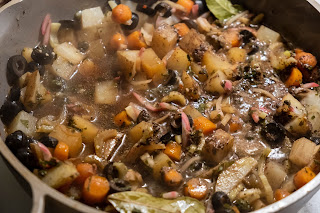 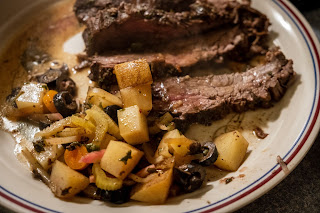 Yesterday afternoon, it appeared to have stopped raining, so I nipped out for a look.  It was chilly and overcast.  I was wearing short sleeves and there was the strangest sensation on my arms....

It was sleeting.  Tiny sleet.  Pinprick sleet, each slushy little drop ice-cold and stinging.  I went back indoors.

We had freeze warnings overnight and our neighbor's roof was sparkling with frost this morning, but at least the sun's out.

May in Indiana!  I've seen nicer ones so far.  There have been good points -- the North Campus has plenty of red-winged blackbirds, a few cardinals, the usual red-tailed hawks and at least one pair of kildeers, long-legged, golden-tailed and fretful.  They're best known for faking a broken wing to lead you away from their nest.  If you're going to be isolated and shivering, you might as well do so in what amounts to a bird sanctuary!

I Have Not Posted Today

We watched the usual round of Sunday political interview/discussion shows, and it left me without much to say.  Or at least no confidence that anyone would be able to make sense of it.

Email ThisBlogThis!Share to TwitterShare to FacebookShare to Pinterest
Labels: things that should not go bang

Towards A Universal Morality

"You can't trust those other people.  They're not like us.  They don't hold the same values."

True or not?  An anthropology discussion turned into a research paper, in which the authors assert -- with examples -- that there is, in fact, a "universal human morality."

Yay, hooray, the lion will lay down with the lamb?  Not so fast; it's a very human set of behavioral rules; they're not without overlap and can even, at times, contradict or conflict with one another:

There's plenty of range for heroism, individualism, group action and tragedy in all that. There are a lot of ways it can go wrong. But it's a start. You've got this much in common with the other guy, even if he is a jerk or a fool.
Posted by Roberta X at 8:09 PM 2 comments:

Wikipedia has a good overview of the "cult of personality" concept in politics, with a lot of links.  While often seen as a major component in authoritarian systems, it's also a danger to popular democracies; conservatives looked with alarm at the often-fawning press coverage of and crowd response to Mr. Obama and liberals (and some others) were horrified by Mr. Trump's rallies and oratorical style.*

I would argue that any time you find yourself wildly enthusiastic about a politician, it's a good idea to take a step back and analyze just what it is you like -- ideas, policy, personality?  Something less tangible, an expiation of guilt or a vicarious feeling of power?

For that matter, if a pol rubs you the wrong way, figure out why.  (Decades ago, my father took a particular dislike to one of Indiana's U. S. Senators.  While he disapproved of the man's politics, it was the Senator's smarmy manners and condescending attitude that riled him the most.  Even in an angry near-rant, was always careful to distinguish between the Senator's having a repulsive personality and his espousing of halfwitted or damaging policies.)

Politicians play on your emotions to get the votes that put them in a position to play with your money.  It's important -- indeed, vital -- to use more than emotion in deciding which of them you will vote for.
___________________________
* I am not suggesting equivalence; they are very different men with very different personalities.  But their Presidential campaigns and terms illustrate two approaches to the same pitfall.

Email ThisBlogThis!Share to TwitterShare to FacebookShare to Pinterest
Labels: marvels of history, marvels of politics, things that should not go bang

Look, a lifetime Facebook ban is not trivial -- but it beats getting exiled to a South Atlantic island with arsenic wallpaper.

Email ThisBlogThis!Share to TwitterShare to FacebookShare to Pinterest
Labels: marvels of history, marvels of politics

There's increasingly less and less reason to post about politics: the shared frame of reference is dissolving into an ahistorical mush of ignorance and mysticism, Left, Right and whatever this is.

Invidious commentators espouse no coherent point of view, preferring to stoke and manufacture outrage, while letting their viewers, listeners and readers take what they shovel out as a substitute for actual news.

Against such a background, I have little to say, and doubt it would do much good.

Holden Wu, while he is very fond of Tam, often sleeps on the bed with me (and Huck).  I am slightly cat-magnetic, more so when horizontal, in much the same way that some people have perfect pitch.

Holden, however, sometimes put his own Wu-cat spin on the behavior: every so often, I find my covers firmly anchored on the non-wall side of the bed.  If the bedspread and blanket shift enough, he will make himself a cozy bed in them on the floor, partially rolled up in the covers and tucked under the edge of my platform bed.  He'll usually disentangle without too much complaint if I need to reclaim the covers, often as not relocating to the mattress.

This is the same fifteen-pound tomcat who still likes to nap in the small, puffy-cuboid enclosed bed I bought even before he was home with us.  He nearly exactly fills it, and snores away happily with his head just inside the little circular opening, a cat-hatch barely wider than his whiskers.

When we adopted him, we were looking for another tortoiseshell cat like Rannie Wu.  Instead, we found an equally idiosyncratic cat, large enough to more than keep up with Huck.  I'm glad we did.

Heads Up, Pan On Sale

The Always Pan people are having a sale, $115 instead of the usual $145.  I have one, I like it and I bought it on sale.  A medium-large deep skillet with a good, domed lid and a modern non-stick coating on the inside of both, it's a very useful piece of cookware, especially if you like one-pan meals.  I think the sale price is good value; I have used my Always pan a lot and it is holding up well.

There's a code phrase for the sale price at the top of the page the link goes to, or there will be as long as the sale is running.  I don't get anything for posting the link.

I grilled a couple of steaks this afternoon.  They were wonderful.  I also slept in and that was pretty wonderful, too.