Went to the range this morning, sending a century of .22s downrange, along with maybe fifty rounds from the Star 9mm...and another fifty from my Colt 1911A1 in .38SA with brand new Trijicon sights! They make a difference. A huge difference. 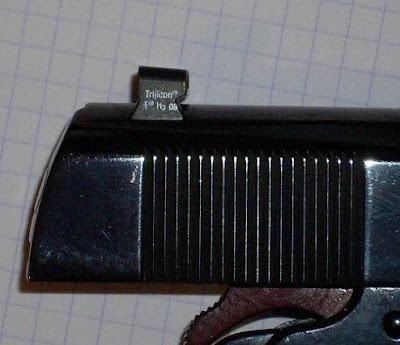 Remember the photo I showed some months back, of the dinky, polished-over sights on the ol' 38 Super? No more! (Come to think of it, the sights on the Star I compared it to went bye-bye, too, that being the one the front sight came off of at the range). 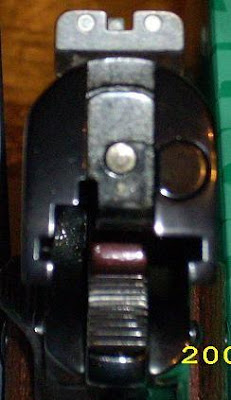 The first mag was pretty funny; I was just noodlin', gettin' a feel for how it wanted to line up and reminding myself that this thing jumps and flashes a bit, and Tam came up beside me and hissed, "You know the POI at 20' is right behind the insert on the front blade, right?" Yeah, I kinda do and yeah, I was shootin' low; but I had not shot that gun for two months and that was with the old sights. (Update: some of the humor-impaired have missed the subtext, in which Tam is half-teasing, half reminding. The original sights would have been regulated for a six o'clock hold; unaware of that -- there's a firearms historian at Roseholme but I am not her! -- I had picked up some bad habits trying to make the old .38SA go where it was pointed with the old sights).

A pretty good day at the range, though the place was crowded, plenty of cars there before it opened. (Tam and Shootin' Buddy, impatient, just had to get out and stand in line at ten minutes 'til -- hey, 30 is toasty darn warm compared to ten below but it's still kinda cold for some of us!)

Unfortunately, one aspect of a crowded range never changes, ever: there's always some ghit bein' careless. I've seen much worse than I saw this morning and I never saw more than one of the Four Rules violated at any one time -- but I am totally gonna design and print a T-shirt covering the Four Rules and start wearing it to the range. At least I'll be able to tell the merely ignorant from the stupid and/or illiterate!

PPS: Sorry about the blurry snaps -- handheld, inexpensive camera, tryin' to not have the sights too out of line.
Posted by Roberta X at 10:17 PM

Thanks for the report. Would you mind saying which Trijicon exactly?

PS, I dont think your any more evil than before.

1) Yes, you are evil!
2) Trijicon sights are excellent on a "bedside table" gun: you can easily find it in the dark.

These are "what the shop had" Trijicons, plain-jane 1911, wide-notch sights. I like them and they're compatible with the sights on all my other guns, too.

All the other nonsense that the gun culture prattles on about on the Errornet or the gun rags, finish, caliber, maker, magazine capacity, inter alia is schlock.

Now that you can shoot, learn to run it and then we can start the dance steps.

Those are snazzy sights. Where did you get them? I'm looking for some myself and can't seem to find them anywhere!

My new sights are Trijicon CA-01, wide tenon sights, but getting the right tenon (or dovetail) for the front sight is important -- old Colts like mine take one size (with some gunsmithing), newer ones take a different size or a dovetail, and other makes of 1911 are different still. Make sure you know what you've got!

Or do what I did: find a trustworthy gunsmith and ask him to put better sights on your gun. There will be some discussion of just what will work for your application and budget ("shooting bowling pins" and "several months lunch money" in my case) and you'll get something you'll like. I went to these guys; they came highly recommended and I'm happy with their work.

Trijicon...trijicon...brains...brains...
I'm not sure I should cut the top of my old 1943 A1 however - is there a simple plain Jane replacement for older guns?
Maybe I just need a replacement slide that I can have all the modern doo-dads installed.