Ancestor Of The Netbook

Ancestor of the laptop, too: compact -- heck, tiny -- and made of modern, super-light materials in the first decade of a new century, it had an innovative keyboard layout and lots of features for the on-the-go user. Sound like an Eee or one of their competitors?

It's not. It's the Standard Folding Typewriter, the very first portable machine. Weighing in at five and a half pounds at a time when a desktop typewriters were upwards of 20# and made of satin-finish aluminum, it must've looked like something beamed in from The Future when it hit the market. Never heard of 'em?

Yes, y'have: after three years and 12,000 machines, the little machine was redesigned to use aluminum castings and stamped sheet steel and given a new name: Corona. As in "Smith-Corona," a few mergers on; Corona just grew and kept on growing. The little Corona Number 3 started out with a shiny black paint job and was eventually offered in red, blue and green. It was built from 1912 through 1941 and in staggeringly huge numbers; you can still find them today, generally for the same $50 they sold for new.

I have one (of course), picked up at a garage sale over fifteen years ago, dirty and nonfunctioning. A trip to one of our local repair shops put it back in good order and I use it occasionally. The three-row keyboard can be maddening but it only requires a light touch on the keys and has a nice, crisp "feel." Controls are where anyone used to a manual typewriter reaches for them and it is surprisingly stable for a 6.5-pound machine. (Yes, the design changes added a pound). Built, per the serial number, in 1929. It's a wonderful device! 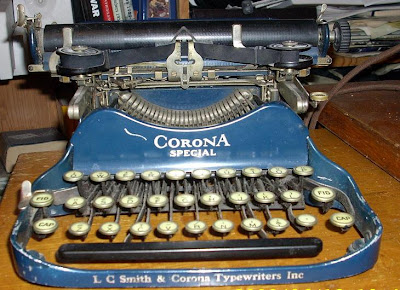 ...This is also a lead-in to an interesting bit of "small world" trivia I'll get around to posting later.

Update: Typewriter Day is 23 June. So I may just type-blog the upcoming BlogMeet to celebrate!
Posted by Roberta X at 10:36 AM

I typed many a high school and college paper on a Smith-Corona, handed down from from Mom.

I don't believe it was quite that small, but it was tiny compared to an IBM Selectric.

I believe that is the same L. C. Smith who (which?) manufactured the famous shotguns from 1881 to 1888, when the shotgun business was sold to Hunter Arms. The company never manufactured shotguns and typewriters at the same time.

They made some nice shotguns. The shotgun company went through several changes in ownership and finally ceased continuous production in 1949. Not quite A.H. Fox or Parker, but good guns and collectible.

Like Sam I have A Smith-Corona that's a bit newer than that, my grandfather used it typing up work orders at his gunshop.

I'll have to admit though, I do prefer typing on an IBM Selectric.

I like Selectrics but the IBM electric I like best is the late Electromatic, especially the models like this. The have the best keyboard layout and feel of any electrics. They weigh a ton! I've owned two, one (elite) that I gave to a friend after I saved up and bought a reconditioned one in pica. That one was thrown out by accident -- I'd hasd it at work to type up labels and one of the bosses saw it, decided it was junk and pitched it.

Shipping on the one in the link is about twice the asking price. Holy cow!

...I think I have a (broken) Selectric stashed in the garage.

Corona made good barrels for the Sprinfield 03A3, although they apparenlty farmed the work out to High Standard.

The Corona 3 ended production as Corona tooled up for WW II, in fact! Edged out by gun barrels.

...I just saw an IBM Electromatic, the predecessor to the one I linked to, and I am In Love. Chassis is the same solid wonder as the later models and the outward appearance is late 30's/early 40s kewl. Oooooo. There's even one -- later production, some differences -- for sale on eBay.