So, I Went To The Gun Show

...On the day after pay day.  Possibly unwise, if frugality was my goal... 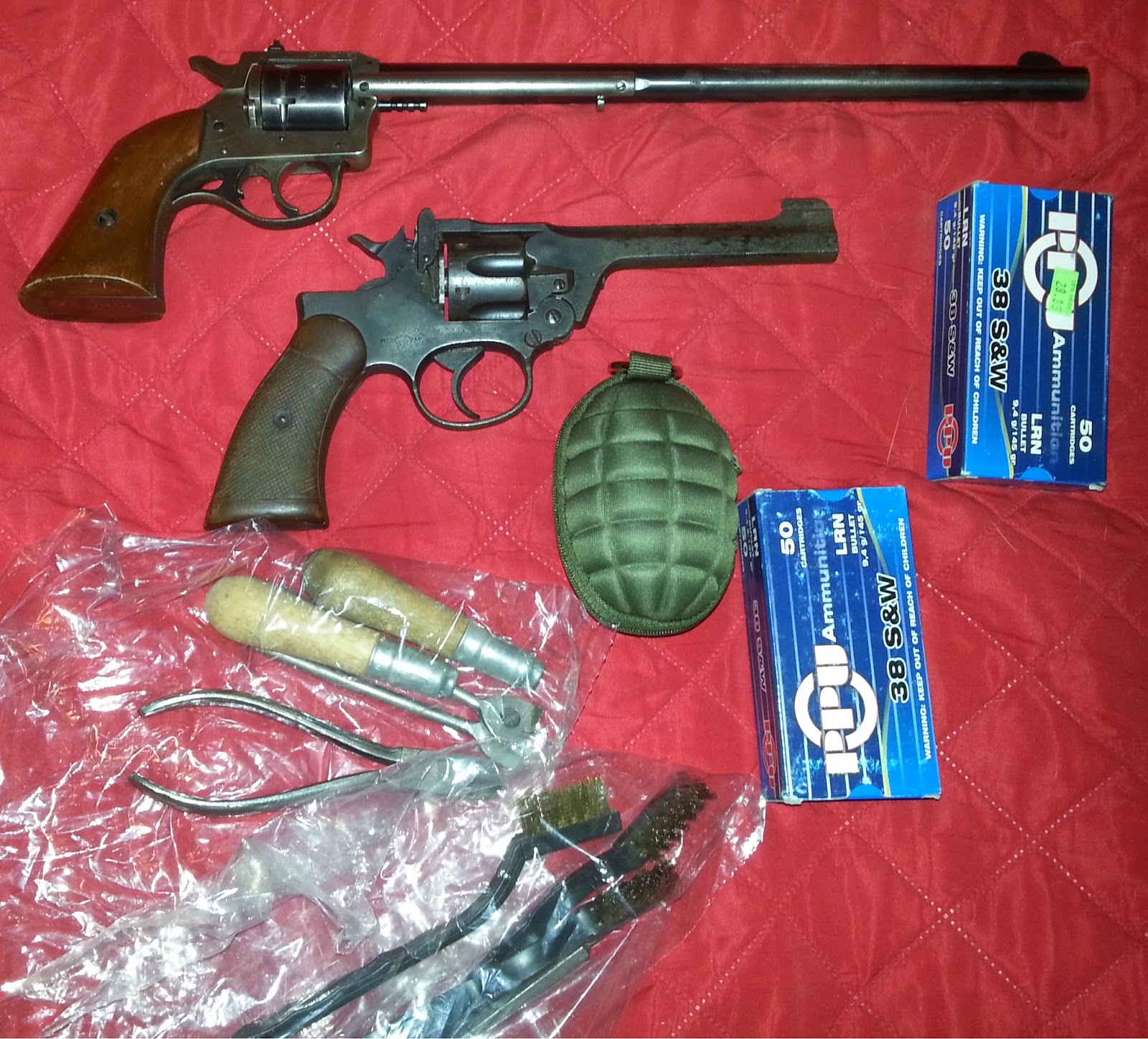 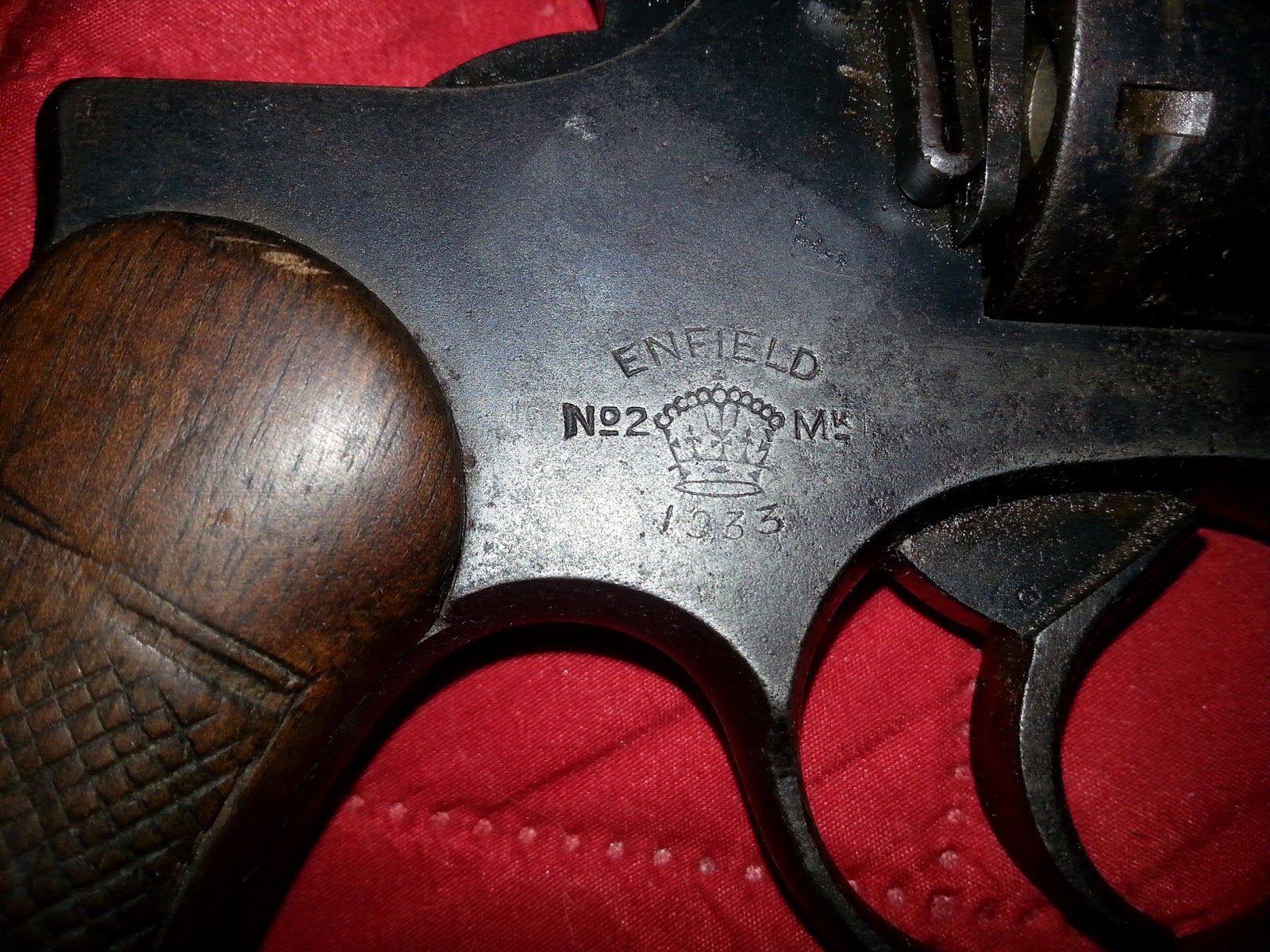 Classy!  Yes, the date is 1933, very much in the range of revolvers I like to own.  The top of the barrel is marked ".38," along with "1933" and the Broad Arrow. It's clearly been civilianized ("civilianised?") and the years and/or owners have not been kind.  Nevertheless, it's something I have been wanting for a long, long time. (The .38 S&W in the first photo ammunition can safely be shot in guns chambered for .380/200; it's not the exact right thing but it works.)

The H&R is interesting, with its preposterously-long barrel, loading gate and spring-loaded ejector.  It's a double-action revolver using the same "pull-pin" removable cylinder design of many of their .22s.  I'm hoping it will be fun to shoot.

Seen at the show, several Nambu semi-auto handguns and Japanese revolvers from the same WW II-ish era (both interesting and sad, since the reason those are showing up on the market is estate sales).  One dealer/collector had a Rast-Gasser and a couple of the Japanese revolvers; side-by-side, the hinged sideplate and internal works of the two were substantially the same. The Japanese revolver design was much improved by a top-break. automatic-ejecting mechanism, rather than the Rast-Gasser loading gate and manual ejection.  (This participial particular Rast-Gasser was in remarkable shape; the dealer opened it up and the steel still showed straw color, all the parts as crisp-edged and shiny as if they were new.)

I had my pocketknife sharpened at the show -- I usually do, since I use it contstantly.  It's gotten so the folks at Knife Sharpest remember me.  Also picked up a nice-looking set of side cutters, some brass brushes, a couple of wood bits in need of sharpening, pin-punches, file handles and a key/small-items case in the form of a softly quilted hand grenade, possibly one of the silliest but most irresistible bits of kit I've seen in a long while.
Posted by Roberta X at 3:03 AM

Quick! Someone make a joke about a "participial Rast-Gasser" before Bobbi fixes it! ;-)

(This is why I usually edit my posts three times before I publish, and all too often three more times afterwards.)

What are the tools in the bag?

My Enfield is a 1934, and does not have the "civilianized" markings on it. It shoots extremely well with the MagTech 38 S&W ammo and it shoots to point of aim at 25 ft. I enter it in a lot of postal matches. Now to cobble up some 200 gr ammo....

Wait...you let other people sharpen your knives, and you pay them?! Tell me you have at least one friend that does this, or you do it, and that this is just a S&G thing you do at fun shows.

NJT: I think you answered the question!

Charles: my "every day work" knife? Sure, I pay to have it sharpened. I can sharpen knifes just fine but it's quicker/easier to have them do it, plus getting it sharpened at every 1500 I attend and can get to their table ensures my main knife gets sharpened regularly.

I don't have much in the way of a bucket list, but if I did, some kind of top-break revolverator would be on it. Well done.

The Webley I have, unfortunately, has so much play in the cylinder (with the hammer back) that I have never shot it. Debating if I should (or can!) have it fixed. It's a cool pistol, for sure!

What is the screw in the middle of the H&R barrel ?
I have a similar gun that I rescued . Some one in Manitoba nearly shot the barrel out of it .(4" barrel)

Glenn, I mananged to find the exact wrong angle to lose the long ejector-rod assembly against the barrel; that screw is into the tube around the plunger and spring, rather than the barrel.

It is an unnecessary addition to the gun. It allows unloading the spent cases back through the loading gate with a flick of the finger, one at a time. You can also just pull the pin the cylinder spins on, remove the cylinder, push out the brass with the pin and reload it before re-inserting (which is very typical of an H&R plinker) and either one takes about the same amount of time -- but the loading-gate method is more "TV cowboy authentic." :)