They Made A Pan For Me?

A start-up that calls themselves Our Place has pretty much made my ideal pan.*  It's early days yet; I only got the Always Pan Wednesday.  But at this point, I'm pretty much sold; the only remaining question is durability, and time will tell.

So far, it is everything the manufacturer promises. Kind of a cross between a small Dutch oven and a frying pan, it's not oven-safe but other than that, it'll do most anything you need it to.

I was checking out the website a few months ago, and they were running a sale that took the price from "Should I risk it?" down to "Gonna have to try this."  The lead time was nearly three months but they were getting rave reviews.  And it's nice-looking. 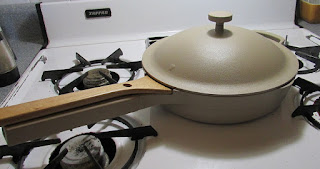 It ought to hold up well: the deep pan and high, domed lid are sturdy, simple aluminum castings, the included strainer/steamer is stainless steel, and the long handle and knob on the lid are some kind of high-temperature plastic that feels a little like Delrin.  There's an included wooden spatula that parks neatly on a short peg on the handle, with the business end hanging just inside the pan through a gap in the pan and lid -- and the gap lets steam exit when the spatula is removed, or you can rotate the lid slightly and close it off.  And the pan has pouring spouts copied from Grandma's cast-iron skillet and every bit as handy.  But wait -- there's more!

The non-stick lining was promised as some kind of next-level ceramic, dishwasher-safe and slicker than, well, any other pan you've got.  I've had ceramic non-stick pans, but they were fussy to care for and not as good as the modern Teflon replacements.

This one is not fussy and almost preposterously slick.
See that?  Nice picture of a pan, hey?  --I just cooked bacon and eggs in that pan, drained off the grease and wiped it out.  It hasn't been washed yet.  If it didn't have high sides, I'd be hard-pressed to corral a fried egg to flip it.

I made Hoppin' John last night -- fried ham chunks, with a lot of fresh onion and a little celery and carrots (plus fresh mushrooms, because I am just that kind of heathen), and once that's all translucent and sizzling, you drain the grease, and add canned chilies, crushed tomatoes and blackeyed peas.  It's not the most pan-friendly of entrees, and to make matters worse, a small amount of leftovers sat in the pan while Tam and I watched two episodes of the second season of Homecoming.†

The pan wiped clean as a whistle.  Even a little sauce spattered down the side and on the outside of the lid (the inside of it is nonstick, too) came away clean.  A little soapy water and a rinse and it's ready to go.

I'm liking this pan.  Looks like just the thing for grilled cheese sandwiches or fancy pork chops and vegetables or just about anything else I might cook for dinner.
____________________________
* They make some other housewares, too -- plates, bowls and glasses with a functional, pleasantly-shaped and no-frills design esthetic that I find appealing and that could fit in just about anywhere.

† Also highly recommended.  You have to watch the (marvelous) first season to know what's going on.  The narrative structure, cinematography and editing remain unusual and engaging, and the music is a wonder.  It's based on a podcast drama -- and the podcast is well worth listening to.
Posted by Roberta X at 8:18 AM

That pan looks interesting, especially the steamer; does the lid, when rotated, sufficiently block escaping steam to prevent scalding one's hand on the handle?

But it's pricey. May I ask at what on-sale price you found it worthwhile buying it?

Alien, the vent opening closes right off if you turn the lid, as good a seal as the rest of the lid -- but the handle stays cool even when it is open. That's a *long* block of some plastic with very low heat conduction; the steam rises away and the handle stays comfy.

Now, the short handle on the other side is part of the casting, and will burn the hell out of your fingers if you don't use a hot pad on it. But they don't claim it won't.

Good cookware is pricey stuff. (The Revereware I use is inherited!) The price that got my attention was a promotion offering a tick under 25% off. I would keep an eye on their website, maybe even sign up for their e-mail (they haven't spammed me) if that's of interest.

It's fairly low-key, direct-to-customer operation. I won't render a final verdict until I've had several months of using it but my early impression is very favorable.

Discovered tonight that my plastic spatula parks nicely on the handle, too.

Thanks. A 25% discount makes it achievable. I'll sign up for their email updates.

High quality, long lasting cookware comes with premium prices; I have a few (wish I had more) copper-bottom Reverware pans I inherited and I regard them as gold. I've been using commercial Cuisinart pans for years I got from a top end restaurant supply place that catered to gourmet cooks (unfortunately out of business now), and found them quite acceptable. But, like a lot of us I'm still on the hunt for that "one perfect pan."

If the handle really is delrin, I hope it holds up better than the delrin spacers in the PA deck of the Harris HT-series transmitters. They tend to turn brown and crack, but perhaps that's a combination of heat and being near RF and 7KV plate voltage all day long.

I don't know what the handle is made of. It has a slightly slick feel. Not as slippery as PTFE and not enough to make it difficult to hold on to.