State unfair. Not the event, mind you -- the circumstances.

Tam and I went to the Indiana State Fair yesterday. A hot, dry morning, it started out pretty well, though, alas, the heffalumps were on break. But we wandered through the tractors and nifty old-timey things from steam engines to button-hooks and a twivel. (I bought a cookbook with images of kerosene stoves every few pages; I had to go look 'em up. You can still buy them, though current production is smaller than the grand kitchen ranges of old. When I'm rich and build myself a 1920s/30s style camping trailer? Bookmarked!).

We enjoyed buffaloburgers and a "bloomin' potato" (marvelous!), I had some soft-serve and Tam desserted on a free sample of tasty fried catfish, stopped by the DNR building and saw huge, shy paddlefish (they'll come right to the edge of their pond but deftly demur when children reach in to pet them) and were about to round the curve to the midway when it spattered rain, then quit.

Off in the distance, we could see rain pouring over the edges of clouds like water running over an open palm -- but it was going away from us and the sun was peeping out overhead. Undaunted, we pressed on until my (rebuilt) knee lit up like pinball machine.

I started limping. It started to get dark. Tam was hoping to get to the Ferris wheel, I had serious doubts; she could see how gimped-up I was getting and agreed to retreat.

We planned to stop on the way back at the catfish booth but the skies suddenly-- Well, look here: 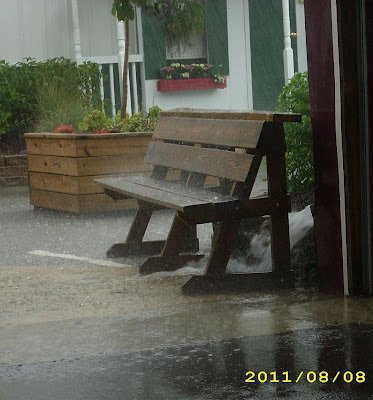 This is from inside the FFA building, where I took refuge while Tam got her catfish dinner (I had a piece -- it was good). Poured down rain like that for twenty minutes, paused for a quick break, and started up again, only harder!

Snack et, we waited for what looked like another break in the deluge, ran off, and got soaked. Stopped at another shelter (literally, an open-sided picnic shelter across from the elephant riding area) for another especially heavy bout. By that point, I was laughing. My knee still hurt, I was soaked to the skin and I looked like a drowned rat. Tam was doing a little better thanks to her always-worn baseball cap (I'm fair but she's fairer; under conditions where I tan, she burns) but still soaked and we were starting to worry about our cameras and cell phones, too.

At the next slackening of the rain, we made a dash for the car and reached it just in time for the rain to pick up while I got the car unlocked. But at least there wasn't much traffic when we got underway!

--This was because most of the time, it was raining too hard to see the lines on the street. I cleverly decided to take Keystone north; it's a main road, well-lit, well-marked and well-drained, after all; it would be best. 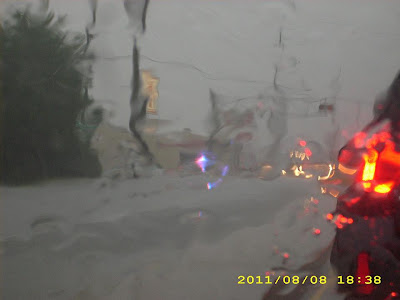 Did I mention the famous Fair Train rails cross Keystone? They do. The crossing signals and gates had malfunctioned. IMPD had a couple of officers there, who, after a half an hour and all manner of traffic idiocy, managed to get sufficiently co-ordinated with the train to open the gates. (I can't blame them for that; there are layers and layers of organization between a patrolman and the Transportation Museum conductor and engineer on the train). You can just about tell where the police car and overhead warning flasher are, a half-block-plus ahead. The street is firmly divided by a high median for the entire block: there's no turning back, though that didn't stop a 4WD pickup truck from so doing, cutting across a lane with barely enough room and clearing the concrete by inches.

--We made our way north, only to encounter even more traffic foolishness occasioned by a foot of water at the intersection of Keystone and Kessler Avenue. It came up over 4 or five blocks, so the hasty and foolhardy would peel out of the far left lane and squishing up the middle or right lane, throwing a huge rooster-tail, until they'd realize their car was starting to run funny from you know, an awash tailpipe or sopping-wet fanbelt, and then try to push back into the slightly higher left lane, leaving a nice wake as they did so. Waves were washing across the sidewalk -- and the curbs are very high in that spot.

Eventually, we cleared the intersection, made a quick shopping stop, returned to Roseholme Cottage and dried off, chilled and chatter-toothed. I was so worn out (from a five-hour adventure!) that I fell asleep shortly afterwards.

On the good news side, I'm pretty sure our drought is over.

PS: Next time, if the weather is bad, I wanna drive one of these: 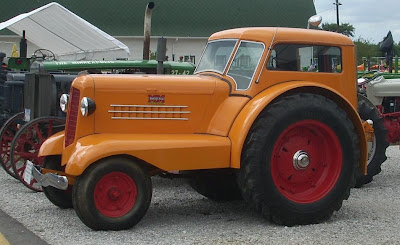 Email ThisBlogThis!Share to TwitterShare to FacebookShare to Pinterest
Labels: marvels of marvelousness, marvels of nature, the wonderfulness of life

I want elephant rides at our fair!

It appears our State Fair elephants hail from Peru; they bring along a smattering of clowns and some interesting exhibits, too.

Judging from that last pic they shouldn't have kept the truck and tractor together in that cold barn, they sure had a cute kid though.

Hey, now -- that's a UDLX, the very first enclosed-cab tractor ever made. Only made about a hundred and a half -- while it was good the other three seasons, it can't have been much fun in summer without air-conditioning.

Have you considered one of the little teardrop style trailers?

I dare say you could knock one together for less than their estimated $3K.

The Minneapolis Moline has no windshield wipers. But I like the color: sort of McLaren Orange.

Actually, it does, but they're arranged in an unusual manner: http://www.mytractorforum.com/attachment.php?attachmentid=2486&stc=1&thumb=1&d=1177094741

Down in Florida, we call that a normal summer afternoon rain. Only thing unusual about this year is that there's been very few of them so far. You learn rather quickly to drive in the center lane whenever possible.

I think the wipers got restored right off the example I photographed -- there's a little "bump" over the windows where the shaft should dome through. --Sorry, I've seen the things here and there for years and I am used to one, top-pivoted wiper per window.

Didn't remember the details of the GP 7 locomotive so looked it up on Wiki. Did you know you can charter one of them and be the engineer? I gotta do that. Here is the entry on the Wiki EMD GP-7 page.

"The Tennessee Valley Railroad Museum in Chattanooga, Tennessee, United States, also has a few operating GP7s. Visitors can charter one of these locomotives for an hour and operate it themselves (under the watchful eye of a TVRM engineer) along two miles (3 km) of TVRM's line."

And speaking of elephant rides, do they let you carry your howdah pistol?

I've seen a lot of doodlebugs patterend after the minneapolis Moline.

I grew up with a Warm Morning oilstove and a Perfection oil cookstove.

That last pic is awesome!

As always, well, often, BGMiller beat me to it. Slip your timeframe two decades and build a teardrop.

I know I'm gonna, on the *counts* fifth round tuit from here.