Our grocery store has a nice deli counter.  They often have small pork roasts in their hot food case, which I'll build supper around on nights I am too tired or busy to cook.  I did so last Friday.

Even a small pork roast is more than enough for two adults; I stashed the leftover roast in the freezer that night and moved  it to the fridge Saturday night.*

By late Sunday morning, I was up, feeling much better and hungry, too.  There was a potato that wanted cooked, an onion in the fridge, and that nice big pork roast...  Say, couldn't I make hash with all that? 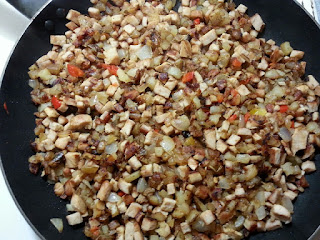 It cooked up nicely; I added a little this and that (rosemary, fennel seed, salt and pepper) and snipped in some pickled cherry peppers; add a fried egg on top and there it is: 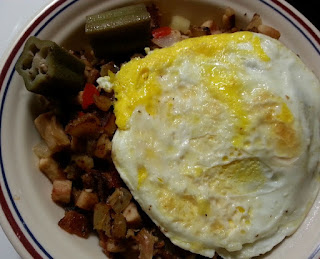 Roast pork hash! Lots of flavor; might've been even better with a few shishito peppers, which go well with pork, but even without, it made for a fine breakfast.  Served with a little pickled okra on the side, just because.

I'll be making this stuff again.
________________________
* My cold-or-whatever had become really bad by then.  I could barely breathe through my nose.  I figured Tam could carve herself a slice or two of pork roast for her Sunday dinner while I tried to get through the cold.  Early Sunday morning, well before sunrise, I realized the ailment didn't quite have full head-cold symptoms, took an OTC allergy pill, and hey, presto!  Within hours, I was cured!  It was the worst allergy attack I've ever had.
Posted by Roberta X at 7:17 AM

AH HAH! The mystery is solved. You must be allergic to Tam.

Now that we know, your loyal readers can assist in eliminating the source of your allergy attack.

I will be first. Step #1: Soak Tam in Tabasco sauce. #2: Store in basement for 24 hours. This simple remedy will eliminate the Tam germs affecting you.

I'd pity the poor fool who tried Step 1. Briefly.