Last night, Tam and I collaborated on another of the "she buys, I cook" meals, in which she picks up ingredients that appeal to her and I see what can be done with them.

The grocer was having a special on ground sirloin (!) and their sweet Italian sausage was looking good, so she got rather a lot of that.  Then she added turnips, onion, dried chanterelle mushrooms and (surprisingly spicy) Poblano peppers.

So I started with that.  I started the mushrooms soaking* and got the meat browning with a little salt, pepper and Italian seasoning mix on the beef.  While that went on, I peeled and sliced the turnips, and put them on a plate to microwave for a few minutes.  It was an experiment; turnips (and even more so, rutabagas) normally take a fair amount of cooking and I was looking for a shortcut.

I had some left-over diced raw carrots, so they went in the pan.  The turnips were tender after just a couple of minutes, so I diced them and added them as well.   Then on to the onion, and I let it cook a bit while I checked out the Poblano and looked through what I had on the shelf and in the fridge.  a small container of black olives looked good to me, so in they went.  Poblanos followed, and by then the chanterelles were ready to be rinsed and join the cookpot.  I had half an Enjoya sweet pepper that wanted used up; diced and sauteed in the middle and then--

It was looking a little dry.  I had a small can of generic tomato sauce, so I put that in as well, covered the pan and let it all simmer for a few minutes. 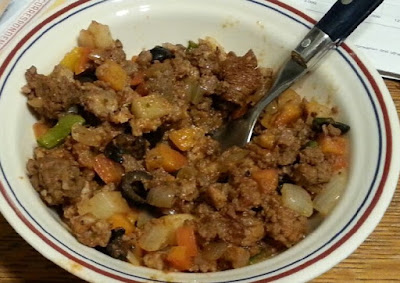 We had one bowl each and had to remind ourselves to not go for seconds -- it was tasty!  It's similar to a Cuban dish I've made before.
_____________________________
* Tam had hoped for fresh; she's a real fan of chanterelles.  Dried mushrooms are usually quite good and these certainly were.  Two ways to rehydrate them: overnight in the fridge in a bowl of cold water, or thirty minutes at room temperature in bowl of just-boiled water.  If you're making something that takes a little cooking, it's easy enough to let them soak while you're doing other things.
Posted by Roberta X at 7:17 AM

Have to remember this one. Looks like it's got excellent potential for "make a big pot on the weekend, eat all week."

UMMM, why the prohibition on a second bowl?

Well, Merle, we're both well past our fighting weight, and working to get back to it. I have finally reached that point where I don't burn it off as fast as I add to it.