...It is under that name, I am told, that the hoplophobic state of Massachusetts bans at least some slingshots.

I don't know if they forbid the kind I own; Wrist Rockets are supposedly Right Out and given that, this little item would give 'em conniptions: 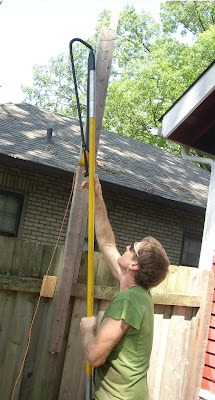 It's called a Big Shot and hams speak highly of it. Thanks to the James Family Outpost (Iowa), have a look at the thing as listed in catalogs. Below, here it is with one of my size 9's for scale. The projectile is a hackey-sack-ish weight, hauling a few hundred feet of string.

Just as Og describes in comments to the previous post, very handy for setting ropes, pulling down deadwood, and other tasks. Jim the tree guy took down dead limbs as high as 75'!

Here's a "before" look at the fallen limb. Email ThisBlogThis!Share to TwitterShare to FacebookShare to Pinterest
Labels: marvels of nature, marvels of science, things that do not go bang

Wowzers. Glad that came down so gently; I like pancakes, but not when they're made out of my friends.

Perhaps your readers would like a link to this infernal device:
http://www.forestry-suppliers.com/product_pages/View_Catalog_Page.asp?mi=8469&title=Big+Shot

Neat! A natural barrier between the houses!

"I like pancakes, but not when they're made out of my friends."

Now, that's my idea of a toy. My inner engineer self wants one.

Actually, the statute you're referring to makes it a felony to possess a "slung shot" while you're committing a felony. And a slung shot is actually something else, but since it's so uncommon now, that everyone thinks it's a typo for "sling shot".

Nothing illegal about it. I've got one. Now, mind you, when I bought I lived in New Jersey, where a sling shot IS considered a firearm and thus requires a Pistol Purchase Permit to buy - which is why you'll never see one for sale in NJ - which is why I bought it in NY.

Aha! Thank you the clarification. Does NJ register slingshots?

Nice antenna hangar. But as I recall from eham it is illegal in fourteen states. You might aim it at yourself and put your eye out.

Of course, what John Law does not know you have should be no problem.

And the thought of a "monkey's fist" at the end of a line brings back memories. Think David's sling with a captive weight.

Illegal in 18 states? Whoa. Just when you think you have plumbed the depths of legislative idiocy....

NJ, IIRC, also classifies clothing as an assault rifle. Yup, gotta watch out for them-there lethal bullet proof vests! Not to mention pepper spray and other sundries, which are also assault rifles.