DirecTV Is A Sack Of Bastards

These days, if you have a decent antenna, there's more on over-the-air TV than ever before, including a nice selection of rerun-and-old-movie channels, multiple streams from PBS, local weather and music videos.  Add one of the video-via-Internet widgets from Google, Amazon or Roku, and what more could you want?

Once upon a time it didn't work that way; there was only cable and cable was expensive and not all that great.  But direct-broadcast Ku-band satellite TV was a brand-new thing, with way more channels than cable and sharp, clear video.  My ex and I signed up for it and wow, there were entire channels devoted to History and Science and even Science Fiction!  It was amazing.

And then, slowly, it stopped being amazing.  Science gave way to empty-headed glitz about "ancient astronauts" and ill-informed cryptozoology.  History slipped by degrees into a fascination with Hitler that would have made Godwin shudder and Science Fiction was replaced by "SyFy," complete with cage-match wresting, movies about shark-storms and a determination to "get away from that narrow focus."

The death knell for me was the infamous History Channel "no more white hair" memo, aiming to interview younger, more-telegenic experts, even if their expertise was considerably more limited than that of the paunch & wrinkles set.  Time went on, and the satellite-delivery service started charging more and more for content that had less and less of interest to me.  When I moved to Roseholme Cottage, the "free professional installation" guy kicked up a huge fuss over the number of trees, declared the project impossible, and started to get back into his truck until I argued with him.  ("What do you know about it, lady?"  "It's part of what I do for a living.  I know the dish can 'see' the satellite -- you don't have to take my word for it, look at the one in the neighbor's yard!")  He did a sloppy install -- a single pole, indifferently hammered into the ground -- but it worked and I was stuck with it for a year while the contract ran down.  In the meantime, the provider stopped selling channels "ala carte," and when I tried to restructure my service to remove an expensive movie service and control costs, they managed to stick me with fewer channels and higher bill, with no reverting to the previous deal.

Then the lousy install started acting up and that was the last straw.  When the contract expired, I cancelled.  They argued with me -- how could I possibly not want their service?  I explained (see above), even going so far as to suggest my disinterest more due to the providers, not the delivery service itself and was told no, that was wrong, the channels were better than ever and the lousy installer was "an isolated incident." I insisted, they eventually accepted -- and have been mail-bombing me ever since.   Hey, no problem, if it shows up in the mail and says "DirecTV," it goes right into the trash unopened.

Yesterday, they sunk to a new low.  When I got home from work, Tam said, "You got a couple cards."  One was a renewal notice from the Antique Wireless Association, bless 'em, and the other-- 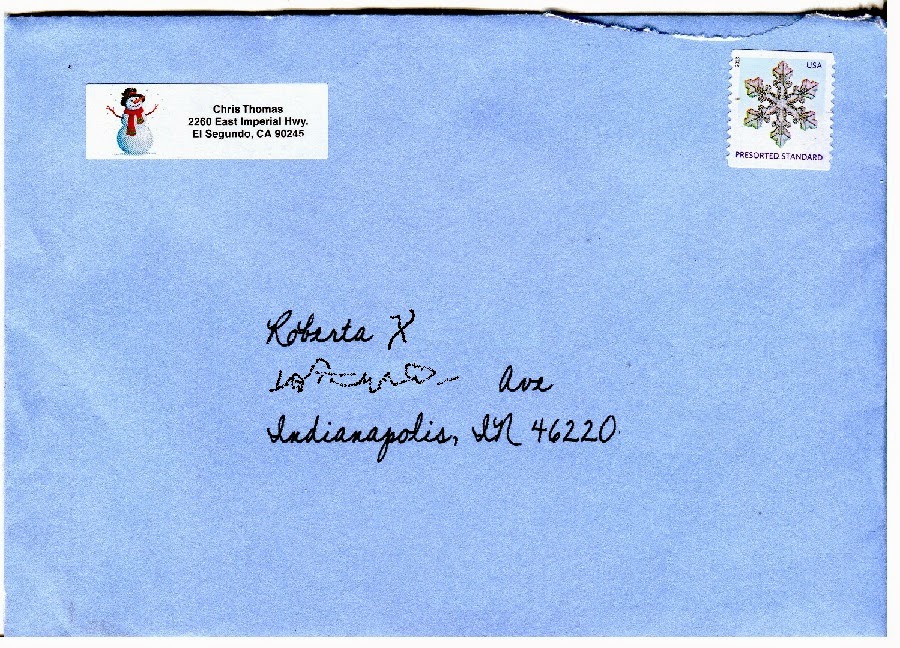 --had one of my more-distant cousins married?  How kewl! 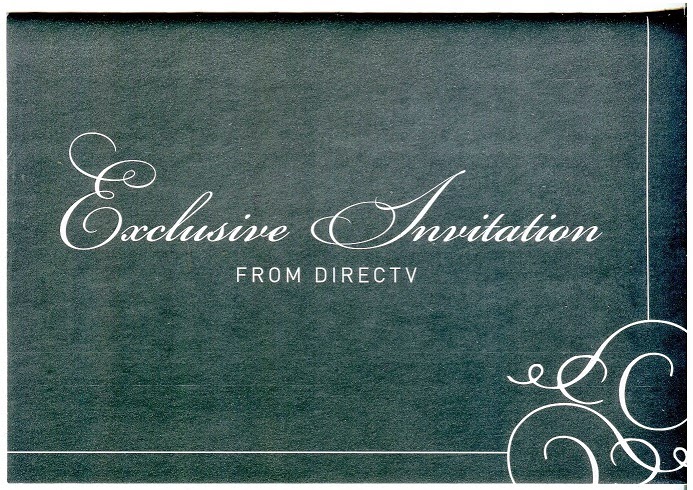 It's an ad.  Inside the card shown was another flyer, offering a fat month's rebate and -- ahem -- "free professional installation," along with low, low rates...for the first year.  After which it would no doubt balloon back to their typical $100+ per month, for channels with nothing on them I want to see.

No thanks, DirecTV, and a big ol' Bronx cheer to you for trying to sneak in under the radar.  Your lack of couth is fractal: it's weasels all the way down.  DirecTV is a deceptive sack of bastards -- and they think they're being clever.
Posted by Roberta X at 7:48 AM

So is just about everyone else. On those occasions when I want to show my students something on the Web in class, I end up appalled (no ad-blockers on the classroom PCs, unlike my office machine and personal laptop, so I forget just how bad it can get).

I'm right there with you. It'll be a cold day in hell before I pay for cable or satellite TV again. I get offers in the mail from DirecTV, including the ones designed to look like greeting cards, on a near daily basis. Strangely, I also get ads for hearing aids every week.

If it weren't for Netflix DVDs and the occasional notice from the government, I would take down my mail box. USPS is mostly just a trash distribution organization now.

I get the "Please come back to DISH" fliers even though I've never had DISH.

And DirecTV is on the way put too because I'm not going to pay $70 for the three channels we usually watch.

We did have Dish in the condo (the XYL worked for an agent when we got married) and we moved it to the house six years later. About three years ago I got sick of their constant increases and cancelled. Got the same fight over canceling as Bobbi did. Had to get angry with the operator and demand to talk to her supervisor before she relented. Then I had to send the LMB and the converters back. Never did get the credit for unused service I was promised.

To this day they continue to pummel us with twice-weekly "come back to Dish" mailers, which are unceremoniously dumped in the trash.

The whole industry is starting to run scared. If I can stream everything I want via Hulu or Netflix and get the few old movies on DVD, why the hell do I need cable or satellite.

In my last house I had cable-company internet, but not programming. They tried and tried and even sent reps in person to the house to tell me how great it could be.

CABLE AND DISH COMPANIES PERIODICALLY CALL TO ASK ME IF I WOULD LIKE TO SUBSCRIBE TO THEIR SERVICES IN MID SPIEL I TELL THEM "I DONT OWN A TV SET" THEY GO ON AND ON I REPEAT"I DONT HAVE A TV SET" THEY THEN ASK "WOULD YOU BE INTERESTED IN SUBSCRIBING ANYWAY ?"

Similar experiences. When I divorced, 5 years ago. The other half got the flat screen.

To this day, I do not miss TV. What little I wish to view, I find on the internet.

Amazing what you can do with all that "free" time.

SEE THE 1956 FILM STARRING USS SALEM IT DOES NOT LOOK ANYTHING LIKE GRAFF SPEE BUT FAIR MOVIE
ENJOY !

And I also still get the 'come back to Directv' mailers all the time. I wish I could cancel my mailbox...

"Happy Holidays" card from my alma mater that very quickly switched into the "Hey, you're gonna die someday, right? How about planning NOW to leave us some money when you take the dirt nap?"

It was distasteful. I don't mind letters about "estate planning" but when it's running under the flag of holiday greetings, no.

We bought a TiVo when they first came out and upgraded to an HD unit when they became available. Both were bought with a lifetime subscription, total price was less than $400.00. It's my understanding that DirectTV uses TiVo software (maybe hardware, too?) in their units that have DVR capability.

There's plenty of programming available for free via an antenna, at least for us. We actually went 20 years or so without a TV at all.

My mother gets mail offering veteran's benefits all the time. This despite the fact that she was never in the military and furthermore passed away two years ago. Once you are on that mailing list, you are on it forever.

I have cable because I pay for it through the condo association. Only thing I actually need it for is the Weather Channel's local forecasts, and even that is doubtful since I put Weatherbug app on my tablet.

I've never paid for TV in my life, we get over-the-air broadcast just fine with a little Weingard flat antenna in the window.
There's nothing out there so awesomely great we need to pay for it.

I get ads for pay Farnsworth of some sort, hearing aids, old folks homes, and personal incineration services. Must be the demographic.

It isn't just DirectTV. I get offers for extended repair warranties for my car, and the envelopes look remarkably similar to an auto recall notice.
Scum.

I stuck up a HDTV antenna a couple of years ago, and pick up the over-the-air channels.

The local PBS station stuck MHZ on its third subchannel so I get to see captioned Montalbano and the Bruno Kremer Maigret series.

When I dropped DISH, I just told 'em I was moving out of the country so they didn't argue for long.

Unfortunately, living down in a valley in the mountains of NC leaves me with only one spotty over the air TV signal.

Some companies just hate their customers.
I haven't exactly figured out the business model yet but it usually involves subscription services, competitive "capture" pricing and future long term chiselling.
When the customers finally figure out the veiled hate, they try to leave with vigor and then are subjected to the true hate.
I think the federal government uses a version of this model.

BCP for the win!

If I understand the 'thinking' behind poor customer service correctly, 10% of the customers do 90% of the complaining. If you drive off the 10%, you can screw over the rest with no problems.

My bitching goes all the way back to when they used to be PrimeStar.
F*ck DirecTV. Up the ass, with a chainsaw, sideways, and no lubrication.

I've been getting them dressed up like they're tax forms or jury duty notices, that generic tear off the sides, then open the long way type.