It was a beautiful day today.  I goofed off -- did a little laundry, started up my motor scooter just to make sure it would run, and made latkes for breakfast.

They're not as easy as they look; I'd made a try at them in the past and wasn't very happy with the result.  But I had a big potato and a new recipe, so why not try again?

You begin by grating the potato -- I use an old-fashioned "All-In-One" grater, so I cut the potato into quarters longways, and grated it into a bowl. (If you're using fresh onion, grate in about a quarter of one.  I cheated and added onion powder.)   Then you squeeze as much moisture as you can from it, push it to the sides of the bowl, and beat an egg in the open space.

You're going to want an eighth to a quarter-inch of hot oil in the bottom of a large skillet, so start that, using your preferred oil.

Mix a quarter-cup of flour, a teaspoon of baking powder, a half-teaspoon of coarse salt and a quarter-teaspoon of freshly ground pepper.  I went ahead and mixed the egg and potatoes, then added the flour and other ingredients a little at a time while stirring.  I added onion powder to the flour, a bit more than a teaspoon, and I could have used more.  Once everything's been absorbed, drop heaping tablespoonfuls of the batter into the hot oil and flatten with the spoon.  Fry them five minutes or until golden-brown, flip, flatten with the spatula, and give them five more.  (If any of them aren't not cooked enough, give them more time.) 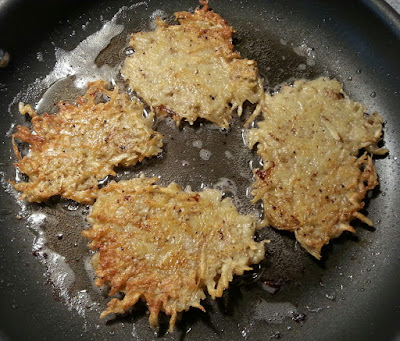 I was happy with how they turned out.  They're traditionally served with applesauce or sour cream.  I used a little truffle-infused hot sauce instead. 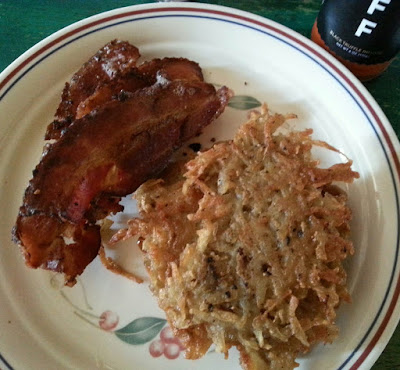 You can scale up from the quantities I have given for one baking-size potato, which makes enough for two people.