He's a visitor from Europe and his coat is gorgeous. Tam and I walked over him several time until she noticed the little guy and said, "Whoa! Wow."

Blurry, but here he is (at right) in racing mode. He's not at all happy with bright lights, so when I went to get a better photo, he'd bulked up into Tough Slug, and was holding perfectly still, hoping to be taken for a stick or perhaps something the dog left. Ha! We haven't got a dog, pal. 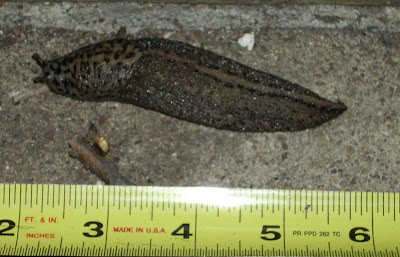 Known -- and complained about -- as the leopard slug, these big guys ("The Great Grey Slug!") have snuck out of Europe and can now be found just about anywhere. I've never seen one this size before. There was a tiny one in the basement when I bought Roseholme, which I "liberated" to the greater risks of the garden and for all I know this is the same critter, grown fat on cat food stolen from next door; it turns out they're mostly carnivorous.

And, yeah, they're gross ol' slugs. Still, that's one heck of a paint job. He was headed for the woodpile and I let him be. There's a storm rolling in and the clever slug seeks high ground. Besides, with a name like Limax Maximus.... C'mon, that's some gladiatorial-kewlness points right there, even before you learn they carry a shield!

And then there's this from Wikipedia, I should blush to repeat it but it's almost too good to be true: "This species has a very unusual and distinctive mating method, where the pair of slugs hang in the air, suspended from a tree branch or other structure, using a thick thread of mucus." And you thought the couple who got married while bungee-jumping were extreme? (Wikipedia, again, "mating habits...considered unusual among slugs." Oh, but when the neighbors do it, that's same-old, same-old?)

Our slug must be single; I'm pretty sure Tam or I would have noticed any swinging-from-chandeliers-type activity. (Alas, the rest of their mating habits are baroque and bizarre rather than high adventure). On the other hand, we have had a couple of trees fall over, under semi-mysterious circumstances. ...Slugs!? What have you been up to, anyhow?

Email ThisBlogThis!Share to TwitterShare to FacebookShare to Pinterest
Labels: Ew, marvels of nature

You made me LOL, gorgeous.

Why am I thinking "Mutual of Indianapolis' Wild Kingdom?"

Try a dish of beer left in the back yard. These critters are terible lushes and will drink theselves into a coma. toss in some small pebbles and a rock fight is unavoidable.

I would but -- at least for now -- I am not much bothered by huge, cammo-wearing slugs, especially since it appears we have only one or two. If they become a problem, it'll be brewski time.

I missed this one yesterday, Roberta. It's a classic! Biologists should be knocking on your door, urging you to write their research papers. I know ... I know ... it's probably a slugologist ... but I don't know the proper name for that specialized invert area.

Good use of your handy dandy tape measure, too.

....With the statement over the comment box I feel really quite dirty in offering you pictures of the mating ritual should you be curious. It really must be seen to be appreciated.

Must have slug cage-match with Ariolimax Columbianus!

The fun part of that, is finding them 'whilst on night safari. Oh, and the being barefoot part. I shouldn't leave that out.
--
Jerry

Come to the Olympic rain forest to see a REAL slug!

Phssthpok beat me to it. Your pet is but a piker compared to the banana slug I stepped/slid on in the rainforest called Washington. I took a long nap and missed summer one year. There's an annual contest for the most interesting recipes: slug shake; sweet and sour slug; General Tso's slugs; slugs in a blanket; slug on a stick; slug dumplings. Pardon me, I hafta go vomit.
wv cogog eyeballing a gear or sharing goggles.

These guys stretch out longer at speed; the happy couple I happened on about a week later as they sped back to their lair(s) were skinnier and in the 6"-and-up range. I don't think our climate is all that slug-friendly (what do they do in the winter? Is that just a single summer's growth?), so I'm still kinda impressed. For a big-city backyard in the Midwest, they're exotic enough.