T. R. McElroy was a blazing fast telegrapher -- any code, any time.  He worked both landline and radiotelegraphy, and set speed records.

But he was ambitious, too.  In the 1930s, he started manufacturing semiautomatic telegraph keys of his own design, massive, heavy bugs that suited his sending -- and which appealed to plenty of others, too.

The original Mac bugs were heavy, rectilinear keys with their own style, a little "Arts & Crafts meet heavy industrial" look.  But the times --and the styles -- were changing and shortly before WW II, Mac introduced a series of streamlined telegraph keys unlike any any other, culminating in the S-600 Super Streamspeed semiautomatic key, possibly the most graceful "bug" ever made.

I own a few Mac keys and recently bought an accessory: 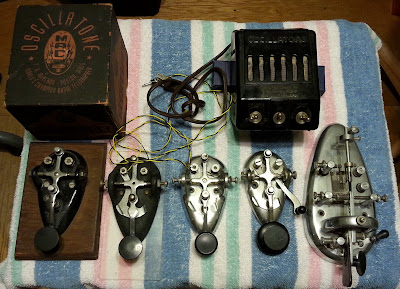 There's an uncommon Bakelite-based Streamkey at far left, followed by a Telegraph Apparatus Co. (not Inc.) copy* of the wrinkle-finished metal-base Streamkey (you can tell by the bulge in the lever arm at the contact area) and a pair of chrome-plated McElroys.  The Streamkey is at far left, and it handles just as fast and sleek as it looks.  At the very back, the accessory and its box: an Oscillatone code-practice oscillator.  They are not especially rare and this one was offered at a very low price -- how could I pass it up? 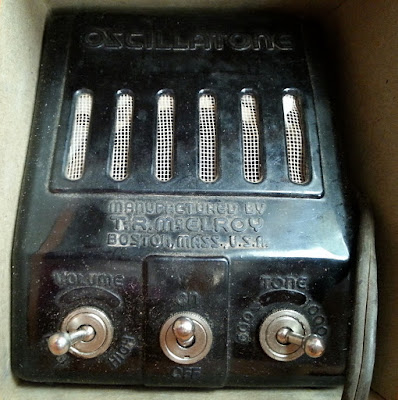 Restoration will be interesting.  The Bakelite is likely to be very brittle.

There are still McElroys in the electronics business.  They're not making telegraph keys any more, but the name lives on.
________________________________
* TACo was a co-venture between McElroy and Hallicrafters.  They built copies of Mac Streamkeys and their own interesting semiautomatic key, sometimes known as the "hole-in-the-wall" bug.
Posted by Roberta X at 7:45 AM

I know only what I've read here and at retrotechnologist about ham, etc. But I know mechanisms. Re: that guy chopping up his hole in the wall, seems like I'd have figured out why it was configured the way it was from the manufacturer before I started cutting it up....

Used an old Hallicrafters receiver to listen to code for practice when I was a kid learning cw back in the day. They made good solid rigs. There must be a ton of them out there, but I bet they are all overpriced, from what I have seen lately.
They want the same price for an old rig as a new, decent new one. Nostalgia is one thing, but get real, people.

Looking at the McElroy page, I was surprised at the spatter-paint job.

Spatter-paint looks like it would be a no-brainer to apply, but it most certainly isn't.

I discovered that the hard way years back when I painted the deck of a small boat. If the spattering isn't applied evenly, it's glaringly obvious. When folks put their minds to it back then, they sure produced some gorgeous stuff.

Roberta X, on my Kindle said...

The spatter-painted ("marbelized") Deluxe Mac keys are a real treat!