Didn't I Already Have Some Of That Stuff?

Some of us are naturally packrats.

I know I am.  This has often been the cause of good-natured joking at work; downtown, I usually have a rough mental inventory and a pretty good idea where to look.  There was some major rearranging about a year ago that jumbled my mental files but I managed to get back on track pretty quickly.

Up at the North Campus--  Well.  Back in the Olden Days, when the stuff up there took a lot more looking after, the bulk of my time was spent at that site.  It was seriously disorganized when I started, the result of several years of "fireman" maintenance: show up, do the quickest fix possible, and get out.  There was an underlying order -- my predecessors had seen to that -- but it was being buried.  You couldn't find anything quickly and things were starting to be piled up wherever they fell.

So I started sorting out, grouping similar items, throwing away what was no longer needed (or simply overlooked trash) and getting the remainder stowed in marked bins, boxes and drawers.  And I maintained a "junkpile."

Not an actual pile; but scraps of conduits, reusable fittings, larger odds and ends of sheet metal, wood,  etc, sorted and grouped, everything from the electrical stuff being sorted by size to the wood and scrap metal being stored in separate bins in admittedly-haphazard assortment.

This has persisted, though nowadays starting it from scratch would take an impossibly-large amount of Engineering time; but it's there and it only takes a few extra steps to put things where they belong.

Yesterday, it bailed me out.  Part of an ongoing project called for about five feet of 1-1/4" thinwall conduit, with hangers* and end fittings for it.  It's not the most common size and our stock of new stuff was all smaller, 1/2" and 3/4" conduit and fittings for wall-socket juice; we hire actual professional electricians for anything bigger.  I was putting together a list and morosely contemplating the ten-foot "stick" of conduit I was going to have to buy and somehow get into my car, when it occurred to me -- didn't I have some of that?

A trip to the storage areas produced end fittings, a nice plastic bushing for the open end, hangers and a piece of 1-1/4" conduit just over the right size: I already had everything on the list!

That part of the project proceeded much more quickly than expected, and let me move on to the next phase, setting the first big piece of the new equipment: 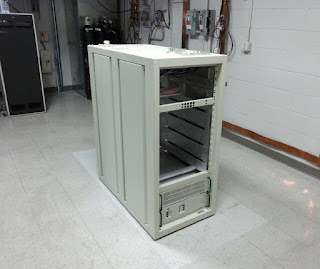 I can't explain much about it, but it's pretty interesting (in geek terms) and I am hoping it will work well.  You can just see the end of the conduit, peeking over the top of it from behind.  It's coming up from the basement.  Notice the lighter patch of tile it's sitting on?  I installed that!  Tiling is drudgery in a big room but a little fill-in isn't too difficult.
__________________________________
* Known to the trade as "minnies," presumably from the Minerallac Company, around since 1894 and probably where they were invented.
Posted by Roberta X at 7:31 AM

And I'm betting you never got a word of thanks either... sigh

Man there's so much more room in starships than on boats....

So true -- Lupine's main structure is more than five miles long and two and a half miles wide! Then there's the 'drive mast at one end of the long axis and radar structures at the other....

Which means a nearly infinite amount of space to store parts against urgent need in the deep dark.... At least the parts you can convince Management to buy.