Our corner market had corned beef brisket on sale last week.  I bought one and put it in the freezer for the weekend.

Traditionally, it's supposed to be simmered in water for a long time.  And that works, but modern corned beef can come out a little bland.  You can wrap it up in foil and roast it, but it's pretty salty.

There's another way, one involving that most useful of vegetables, the potato: 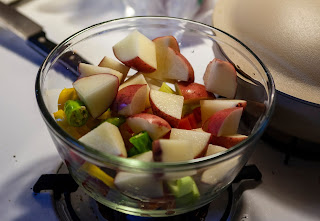 I rinse off the corned beef and put it fat side down in a covered roasting pan on the grill, with the included seasonings and an extra bay leaf or two.  Give it an hour per pound, indirect heat. 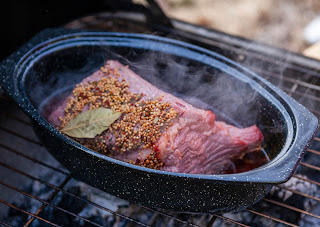 Prepare the vegetables and add them when there's an hour or a little more to go.  I used two big red potatoes (three would not have been remiss), a smallish onion, a half-dozen "baby" carrots, three stalks of celery,  three small sweet peppers and three shishito peppers, all cut into "chunks," plus oyster mushrooms.  I added a level teaspoon of capers on impulse, and that worked well.  (I thought I had a turnip, too, but it had gone soft.)  The potatoes should be the bottom layer in the pan -- trust me on this. 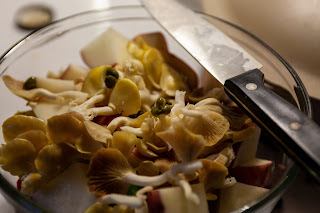 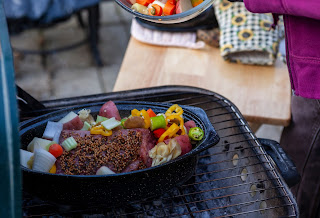 Looks good -- and needs no seasoning at all. 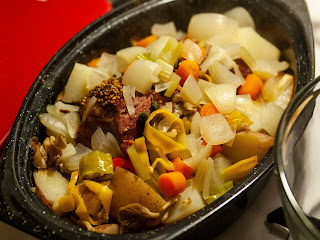 It tasted great.  The potatoes were amazing, having cooked for an hour in the meat juices, and the meat was tender and moist. 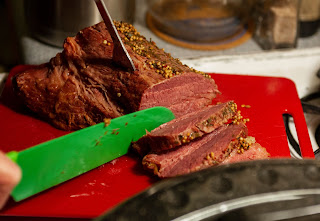 And the cooking consists mainly of building a charcoal fire, setting the pan on the grill, and ignoring it!  Gotta like that.  Cleanup, well, the pan does take some scrubbing.  But it's worth it. 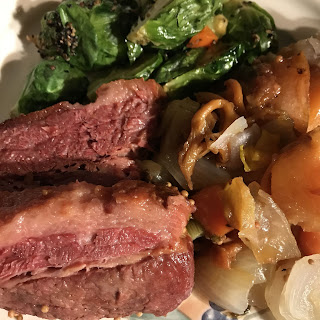 Served with Brussels sprouts, as a kind of nod to the usual cabbage.

(All photos by Tamara Keel)

I have no grill, but can improvise on your methodology in preparing the corned beef brisket that I purchased & froze last week. I think that I shall try turnips among the potatoes on the bottom, since I have but a few small potatoes (& the turnips are "good"). Thanks for the inspiration. I'm no cook, so inspiration helps!

Turnips are lovely in dishes like this -- I peel them and treat them the same as the potatoes. Low, slow and covered is the key to this, and it ought to work just as well in a conventional oven. I have not tried a rutabaga (swede), but they should workl, too. The taters and 'neeps cook in the pan drippings and pick up a wonderful flavor.

We thought the fresh oyster mushrooms added a nice note. There are a lot of possibilities if you have a good selection of mushrooms locally. The more-usual white or portabella mushrooms work fine.

I use an hour per pound as a guide, and check doneness with a probe-type meat thermometer.

And here I have a whole head of cabbage that was looking forward to being served with the corned beef brisket for St Pat's day. I like your way, and thanks for the additional notes. (Alas, I've been picketing the only really local market that might have the 'shrooms for COVID avoidance. That may be Hunky Husband's and my first venture to that market since we are defined as fully vaccinated as of today!)

Cabbage can work in the roast pan, possibly cut in smallish partial wedges and added with the other vegetables. It should soak up the pan juices like the potatoes.

I am very fond of frying cabbage wedges in a lightly-oiled non-stick skillet, with a touch of sugar (optional) and a generous sprinkling of balsamic vinegar. It goes quickly, you just brown it a little. It's a fresher flavor than boiled cabbage.

Good idea, RX. Sometimes I shred cabbage (to make 2 cups) and a small onion, sauté in olive oil, then dump 2 lightly beaten eggs into the pan for an "omelet"-like dish. Great served with salsa. The original recipe (circa 1960s, "Chinese Eggs") called for seasoning with salt (a no-no for me) & pepper and serving with ketchup.

That sounds great! I'm going to try it soon.