Couldn't put it off any longer.  This evening, I shut the water off, cut the old pipes, and installed the new faucet on the kitchen sink.

I won't say it's done.  Not until it's had twenty-four hours or more.  But it's in and it works. 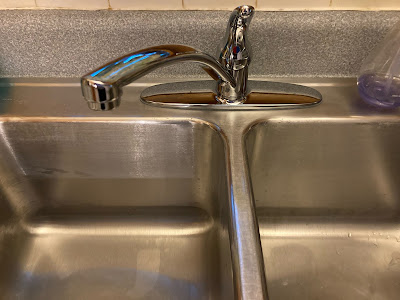 Below, I had to change my plans (a connection hose was a little too short to reach the shutoff I was going to put it on), and I'll probably leave the dishwasher disconnected until we replace it, since I had to swap connections between it and the hot water.

The connection stubs from the new faucet were very short and I didn't have a large enough open-end wrench for the flexible fitting.  A half-inch stubby combination wrench held the line from the faucet well enough but trying to swing a crescent wrench for the hose connectors in the space between the basin and the wall was difficult.  The basin wrench I bought worked great for unscrewing the nuts that held the old faucet.  I might have been able to work a ratchet and extensions in to reach them but it would have been tricky.

Now we'll see how well it holds up.  The spout is a bit longer than the old one, so that should be an improvement.

Also, I think I'll shop for some larger combination wrenches, including a 7/8" stubby.

I personally do my best cussing when I am fixing the plumbing. You?

I'm happy that you find the work that you did a "relatively minor plumbing project". I would have dragged my feet for months. Of course, my use of tools has declined over the past 30 years as my tremors have gotten worse. Now, I would have called "our" handyman to do the deed. (Hunky Husband never was much for home maintenance and his advancing dementia gives him a good excuse to not touch tools, now. We should ship our tools to you! Stubbies are cute, but I've never owned one.

Cop Car: well, it would have been minor for a plumber; it loomed large for me! :) Push-on "shark-bite" connectors and components simplify it a lot. Tremors are frustrating; at one point, I was wedged in under the sink, laying on my side and reaching up to tighten connections with a heavy adjustable wrench in one hand and having to stop and rest to steady up.

Stubby wrenches (and other tricky types): looking back, I have had more need of short, S- or C-bent, crow's foot and other specialized wrenches than the plain ones in my home and car maintenance and repair. At work, where there's a lot of Unistrut and big flanged coax connections, I get a lot of use from full-sized open-end and combination wrenches, but at home I think if I was starting over, I'd skip them and go right to the oddball types.

I want to write sensitively about this -- my Dad struggled with dementia in his 80s and as it advanced, he did less and less around the house. His "memory leaks" frustrated him but he put in effort to remain pleasant and upbeat and I think that was a considerable help to him in staying anchored. He was always very smart and that never faded.


NJT, for me it's not so much the plumbing as it is getting into and out of awkward spaces -- especially when I get into one and realize essential tools or parts are out of 'em and I'm going to have reverse the process and go back through it again. I have bruises on my ribs from yesterday's project.

You know what I'm talking about, RX, on both counts - tremors and dementia. Keep on truckin'.

I'm a big fan of quarter turn shutoffs. But, needing to make an appointment to shut off the water does discourage industriousness. One bathroom vanity still has the legacy multi-turn shutoff. With the handle installed, one of the drawers collides with it. So, the back of the drawer has a small hole that matches the stem of the valve. It wasn't me, it was before I got here.

Yes, I really hated crawling under sinks, never had a sink that wasn't in a fancy cabinet. Now that my wife will call a plumber, I have given away my hated basin wrench.

It’s the getting in and out of thighs awkward spaces that I hate. I’m fortunate that my son, who is much skinner and bendable than I, lives across the street. He was a huge help the last time we had to replace a faucet.