The relative positions of media outlets on the Ad Fontes bias/accuracy chart are the center point of a "scattergram" of ratings for a wide sampling of items for each one; if you go to the interactive version and look up the various rated providers, you can see it and find links to the stories themselves.

NPR's will probably take a hit in the next update and it's an instructive incident: Nina Totenberg reported that Supreme Court Justice Sotomayor had begun working remotely -- and that the reason was that Justice Gorsuch's had refused to wear a mask, while all the other Justices were doing so.

This story clicked right into Ms. Totenberg's confirmation bias, and right into her story about tension among the justices.  The juicy item of conflict between a supposedly defiantly unmasked Mr. Justice Gorsuch and an aggrieved Ms. Justice Sotomayor was raw meat for a lot of the media and a predictable feeding frenzy ensued and escalated, nicely unpacked here.

The United States Supreme Court was not amused, and issued a joint statement:
"Reporting that Justice Sotomayor asked Justice Gorsuch to wear a mask surprised us. It is false. While we may sometimes disagree about the law, we are warm colleagues and friends."

While there's no requirement that Supreme Court Justices love one one another, agree, or even like their fellow Justices (and historically, there's been a lot of loathing), the present Court appears to value an atmosphere in which they can argue like hell and still get along.

There's a recent drawing by a court artist making the rounds, and it showed up on Twitter in response to the joint statement -- it's the header at SCOTUSblog right now, nine chairs all in a row, six masked Justices, an empty chair, Justice Gorsuch unmasked and one more Justice in a mask.  Striking, but it tells us nothing about it got that way.

As a follow-up, Chief Justice Roberts issued a statement of his own, "I did not request Justice Gorsuch or any other Justice to wear a mask on the bench."

I kept checking NPR's website to see what they had to say about the situation.  Eventually, yesterday evening, they did a news story about the news story, with rather a lot of of hedging from Ms. Totenberg.

NPR is well aware of how bad a gaffe this is, and has got out the sackcloth and ashes, or at least the Unabridged:
"In the absence of a clarification, NPR risks losing credibility with audience members who see the plainly worded statement from Roberts and are forced to go back to NPR's story and reconcile the nuances of the verb 'asked' when in fact, it's not a nuanced word."

1. Always suspect a story that fits too well with the reporter or outlet's inclinations (and/or your own).  Hey, it could be right, but that stuff is red meat, no matter which direction they're leaning.  Look for independent confirmation -- of which this story never had any.

2. Reality is nuanced.  Twitter -- where this thing really mushroomed -- and headlines are not.  Story ledes and hooks (that part that grabs your attention away from the hockey scores or WW III reports) are not.  This can get out of hand rapidly.

3. Time is your friend.  My initial reaction (to Tam) was, "I thought the Justices got along better than that.  Didn't Scalia take Sotomayor hunting, way back when?"  And later, after learning Sotomayor is diabetic, "It's really going to stink if is Gorsuch is that big a shitheel."  Well, he's probably not.  And they probably do get along well enough.   And while there may have been a minor kerfluffle over masks, the Justices settled it among themselves and presumably nobody's seething, or at least not enough to go gripe about it in the Press.  Tempest, meet teapot; teapot, meet Totenberg.  Oops.

4. I could not find links to the official Supreme Court statements, not even at SCOTUSblog.  Forbes linked to tweets, and that's as close as anyone came.  WTH, Press?  C'mon, show your work when you can. 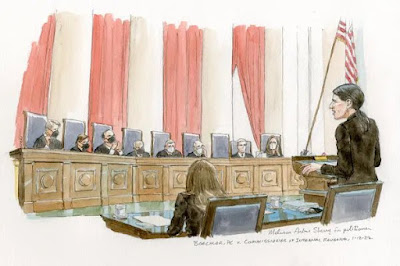 Email ThisBlogThis!Share to TwitterShare to FacebookShare to Pinterest
Labels: marvels of politics, The press of the Press, What Would Gutenberg Do?

NPR's will probably take a hit in the next update

I see that there's now "suggest an article to rate" button -- which is a little concerning as it biases their sampling of articles -- but perhaps it will draw their attention to this one, and that will move NPR's spot on the chart?

If someone puts in a concerted effort to have friends submit many undisputedly accurate articles from their favorite source, and the most egregious uncorrected errors from their least favored but currently rated as "highly accurate" news orgs, will that skew the ratings?

If they don't use submitted articles in the ratings, or weight them low, it's quite possible a notable 'oops' like this would not make the small selection of articles that they use in making their evaluations.

On another tack, the measure of agreement between articles from different news organizations is part of the evaluation of the accuracy. If Ad Fontes sample from before the statements from the Supreme Court justices were issued, you will find that the high center news sources were *all in agreement* that Gorsuch had been asked to mask but didn't, and only articles from Fox and obscure low right sources suggesting that there was any issue with this reporting.

(In checking that, I see many of the same sources appear to be going by versions of the NPR reporting more recent than the supremes' responses in making new commentary saying that the Sotomeyer-Gorsuch and Roberts statements were "non-responsive" to Nina Totenburg's claims in her reporting. It's too bad that NewsDiffs.org doesn't track NPR, but enough others reported the NPR reporting verbatim that I think I can go back and check if my memory is faulty, or if it is them having a chron problem.