Sometimes, It Is Easy. Other Times, Er...

You've got to hand it to Stores & Cargo: any time you don't want 'em to be, that bunch of slobs is efficient. The very morning promised (and the morning after I'd wasted my post-dinner relaxing time enduring a twenty-minute lecture in the lesser of the Lupine's two bars from a half-sozzled squirt-booster pi-lut annoyed at my hand-waving oversimplification of how their jarring little toys "fly," geeeesh, it's just a darned good thing he's pretty handsome), there were two only slightly scuffed and dusty boxes waiting, bungee-corded to the perforated wall just inside the Engr'g. Shop with my name scrawled on them: one (1) 9017 power grid tube and one (1) Y100 broadband amplifier cavity, 9017, for use with. Oh, huzz-ah.

Checked in with the Chief -- him in a slightly better humor this ayem, for a wonder -- and he allowed as how Big Tom was available to lend a hand. This is good (you just about can't swap out the awkward cavity single handed) and bad (we kid Tom with friendly, caring, slanderous questions like, "Were that puppy's legs attached when it was handed to you?" and "Broke an anvil again?" It's not quite true). But there's not all that much to break on this job. Mostly.

We were still outbound at that point -- under thrust but the stardrive throttled back; it's safe enough to work in the drive room until we prepare to go transluminal. Off we went, in the doofy electric car I've mentioned in the past, and a mere 45 minutes later, we were undogging the hatch to the Drive Room. The little (about big-fridge size) RF driver for this octet of ion engines is tucked in an out-of-the-way corner next to the triple phantasmatrons of the stardrive, one of the louder compartments but not terribly hard to get at. We'd talked through the process on the way up, so I rang down to Ops/Drive Control, told 'em what alarms to ignore, and we set to. 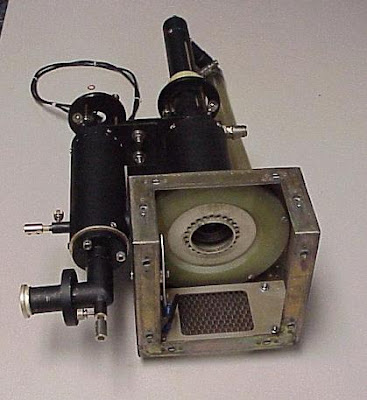 It went quickly; I started the test gear warming up (solid state but thermal drift is a still a PITA for the first half-hour) and we had the cavity out and the new one mostly in before we hit the first hitch: the thing hangs from a vertical panel on four 1/4-20 studs, the business ends of bolts about as big around as a pencil, and the threads on one of them were mashed. What screws down onto it is an aluminum spacer with internal threads -- except it wouldn't. I spent ten minute trying workarounds; installed, this stud is in a spot you can't actually see without removing the entire assembly and starting over and it seemed most likely the soft aluminum was what was out of whack. No such luck, couldn't start a steel nut on it either, no room to run a die down it.... They're way oversized for the app; after weighing the time against the possible negative outcomes, we just left the thing off. The spacer is one of two holding a little mind-your-fingers cover over the incoming 3800 Volt supply; one spacer can do the job alone, since the cover backs up to a forced-air cooling connection and can't be twisted to expose the hot stuff, not to mention the whole thing is buried inside the locked cabinet of the RF supply.

That settled, we finished up the installation (fighting the teeny-tiny hardware that hold the grid /screen supply connector, what were they thinking?), I popped the tube into its socket (that round gizmo pointing at you in the photo above; you're looking down at what is the top of it when installed) , fought the dozen Dzus fasteners that hold the cover into lock, and set it to warming up. Yay, nothing shorted out on start-up and after ten minutes, we applied high voltage, set the idling current, flipped the switch to put RF through it, and it came right up. Took very little tuning and tweaking and sha-zam, it was right as rain. Could it be Big Tom is good luck?

This never happens. Except that once.


...And for my next magic trick, after several days of routine splice this, reboot that, add n through x to the second assistant drive tech's display, yadda-yadda, things did not go nearly so well.

I have mentioned (have I not?) that the RF supplies for the octets of ion-drive maneuvering rockets are a mix of solid-state and tube, whatever the starship company comes up with, generally trending towards the no-adjustments-needed solid-state stuff over time. "No adjustments needed." Ha! Control of the newer versions is stupefyingly complex compared to the older tube-type finals. There's a fancy little box to do that. The amplifier itself, oh yeah, that's just a honkin' big brick with gain, hasn't got Knob One. But the controller? Spare me! Menu-driven, minimal controls, maximal settability. (Hear the foreshadowing ticking?)

We'd had one go dead out at starboard/forward, a section of the ship where hardly anyone goes, a long nasty walk to a locked hatch with a big reminder: PRESSURE SUITS MUST BE WORN BEYOND THIS POINT. It's dusty, too, which is another reason for the suit. (Built in the late 50s, they're very nearly sure the asbestos abatement was successful. But just in case...?) And it's about five feet between deck and overhead out here, since it's near the edge of the field interface under full stardrive. There's plenty of safety margin, they tell me.

One of the control units had been getting flaky and shortly after we skipped out of rational space, it just plain died. Nothing coming back on telemetry. Nowhere near the stardrive room, so no reason not to get a preset spare from Stores & Cargo and put it in. Since I'd had just great success with the last ion drive problem opportunity, it fell to me. Oh, yay me.

Still, no big deal, just the aforementioned nice walk, checking in with Security along the way since they do like to know why we are waking them up by making motion alarms go off. Got out to what amounts to a star traveling basement or attic, had the replacement in no time flat, powered it up and -- de nada. Nil. Nuttin' "Pre-set?" Did I say "pre-set?" Every blamed setting in the thing had either never been entered -- check the tag, "refurbished," it says -- nope, they'd all been lost last time it went in for repair. So I spent the next four hours on the horn to my peers in the shop and to Drive Control until, finally, every last fiddlin' parameter was right and it popped right up, "lock" light on, working just as it should in every detail and, I swear, snickering somewhere deep inside itself.

--Also? I don't care how advanced they get, all pressure suits, space suits, whatever they call them, they all chafe and reek after a couple of hours. It had sure better build character.


The observant reader will have noted I still have not accounted for the "0900" written on my left hand. That's 'cos the associated project has been put off. But stick around; it's coming up soon!
Posted by Roberta X at 10:22 PM

I love these stories.

But why Dzus fasteners?

You know, hardly a day goes by that I don't ask myself that same question.

When I was learning to fly, an instructor once told me "you can't lose a Dzus"

Reminds me of when we used to tune the wave guides of X band radar antennas with a ball-peen hammer.

There is an art to putting just the right dents in until the waveform on the scope matches spec, then you hold your breath and hope it holds steady until QC signs off.

Solid state doesn't mean no adjustment, it just means you have to get creative.

I'd like to get my hands on Mr Dzus and use a bunch of his fasteners on him. I have lost thousands of them, and I'm confident they wander off to the land of the Sock divorces and hang out with all the odd left socks.

I have no idea what you said. But (because?) I'm awestruck.

Makes me realize all over again that I'm glad my HP experience was confined to SW, with 17,500V on the anode and 2A cathode current. And the idiot before me had defeated the interlocks!

A girl that can spell Dzus correctly is a girl after my own heart. Granted, getting the little bugger springs into place is a pain, but after that they're pretty handy. Much friendlier than those godless Camlocs, too.