They Wear Masks, You Know

The grounds of Roseholme Cottage had a visitor yesterday afternoon. For the first hour and forty-five minutes, Tam and I both assumed it was a bird and largely ignored it; it wasn't until I headed for the garage to get my bicycle that I saw what it really was. As I crossed the back yard, a louder series of frantic, plaintive wheepling burst out: there was a raccoon kit hanging onto the big maple outside the kitchen, head down and with a back foot wedged in the bark, about twelve feet up.

I yelled for Tam and we checked the situation out: no Mama 'Coon in sight, at least two hours of crying and clearly in trouble. So -- clever sorts that we are -- we decided to get the critter to the ground. 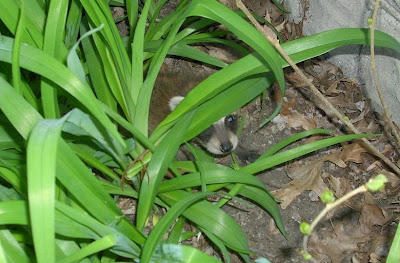 'Cos we're all down with Gaea an' like that; also, it's illegal to shoot 'em in town. Now the truth of the matter is, as cuddly and fuzzy-wuzzy as a baby raccoon is (and they are -- cute as a button, that one is), you do not want want to get between one and Mama. You don't want to handle them, either; they often carry a number of very icky parasites and can even have rabies.

So we used a spring rake. The kit was happy enough to climb aboard and with me handling the rake and Tam opening the gate -- the tree is just barely outside of "Fort Bobbi," the fully-fenced back yard -- we lowered the kit to the ground, where it promptly hid itself in the tiger lilies, wheepling and trembling.

After a my bike ride and another couple of hours with no sign of Mama, I left a plate of milk and canned catfood nearby, figuring it couldn't do too much harm (the 'possums would clean it up if the kit didn't).

...Some readers are probably thinking "Kill it! Follow it back to the nest and wipe 'em out!" They've got a point; city raccoons are pests. They are incredibly destructive if they get into one's home or trash cans, and they're rough enough and tough enough to do you some harm, too. Back at my old house, a giant old king 'coon would occasionally raid the outside cat's food and just stare me down when I tried to shoo him away. He was pretty confident he could take me.

But wherever raccoons can live, you will have them, at least in Indy, at which point the question becomes this: do you have a well-mannered tribe or not. Ours has been a good tribe; they live in the storm drains (except when it rains), usually stay out of sight and don't raid trash. It's only the mother and a kit or two, every year. If we did manage to clean 'em out, there's no guarantee the next gang of thieves would be as civilized -- and there would be a next gang.

This morning, the young raccoon was gone and so was most of the food. No sign of a struggle and no footprints other than two sizes of coonhands. Keep an eye on that one, Mama 'Coon, it's a little too adventuresome.
Posted by Roberta X at 8:59 AM

Cute photo...Momma likely left the trapped kit for awhile, then came back to look for it. Hope it got home ok.

Yep, the resident tribe will generally send nomads packing. At least until some developer sends more than one tribe looking for a new home. In that case, everyone has troubles.

But it's also wise to stay on the good neighbors side of a 'coon family. It takes serious locks to keep them out - they hold a grudge for a long time - and they operate by smell. Anything an enemy has touched becomes a target for destruction. Of which 'coons are past masters.

WV "coaxical." I suppose that would be a semi-coaxial cable. Like 9913 at a kink.

If we did manage to clean 'em out, there's no guarantee the next gang of thieves would be as civilized -- and there would be a next gang.

Incidentally, the word "wheepling" is now firmly ensconced in my vocabulary.

True story, or parable for the coming election?

Bit of both -- adaptable, feisty omnivores who steal from you, harbor parasites and, if got rid of, will only be replaced by more of the same? Congress. At least raccoons do it with some style. And they talk nicer, too.

Yeah, cute as they are their greatest threat is their health hazard to Randy and Huck because they are pretty much immune to a bunch of viruses and other diseases that kill felines quicker than a 12 gauge.

I know it sounds like a "Duh.." statement but be expecially careful with your cats and the coon feces. When you start seeing that stuff around the outside of the house call animal control...

Oh, darned right! Cats are inside 24/7 and we mind where we step. Yeah, they dassen't mix.

--In the last 3+ years, other than the kit yesterdaty and an occasional apologetic twilight scurry across our yard, they've been stealth 'coons, mostly peering from storm drains and ducking out of sight if they think their position's been made. Oh, I've caught them giving me the beady eye from high up in the trees a few times, too. But between Animal Control, feral dogs and 'yotes, they seem to be controlled.

The ones in my neighborhood are mostly well behaved except for one that we had tearing up the trash cans and hissing at the neighbor's daughters a couple of years ago.

A .22 pistol and something improvised from a paper towel roll and kitchen sponge took care of that one.

I'm sure the latter was just a way to sponge up the mess without having to get too close.

Several years ago, I had one that made itself pretty well at home on my front porch eating dog food. I was more or less in the live and let live frame of mind until it started getting pretty hissy every time I decided to step outside.

So, it was bye bye raccoon.

About the way I would have handled it, nice story. I don't have cats nor dog.

Eral, want one? Huck made a dash down the basement stairs tonight that earned him identical shout of annoyance from Mommy and Aunt Tam. Tamara caught him in the stairs, in mid-air, took him upstairs and gave him the same eye-contact, looming-over and lecture she'd give a dog.

That cat has a deep-seated and unreasonable desire to Explore The basement. I don't think Tamara's going to awe him out of it, but it's worth a try.

...On second thought, I'd better keep him. He's a contrary little cuss but I'd miss him too much.

We had a problem with racoons invading our chemical plant for a while (which gave me ideas for a great new Sci-Fi channel movie). Those things are M-E-A-N, as in, "The darned thing is in a cage trap and I STILL want a full suit of plate mail and a 12 gauge if you want me to get any closer to it than 15 feet. And don't use my real name where it can hear, because I'm afraid it will track me down and come after my family if it ever gets loose."

Lit up the trashcans with a Mag-lite to see what was making the racket. Coon blinked a few times then turned it's back to the glare and held up assorted bit to the light for some comparison shopping.
As the only firearms in the house were a M-53(a ChiCom MN44)and a Ruger .357 and we really didn't want the neighbors talking about us we went the bungee cord route. No more crashing lids. The cords held them at least 10 inches above the ground when pried off the cans.
As for Coongress: I'm sure the IQ of such an organization would be MUCH higher than our current Congress.

WV "boastore" where you buy snakes.

Pepper spray works a treat on racoons! I had a whole family of 'em climbing in an open bedroom window to eat our cat's food, but one quick spritz with OC convinced them our place wasn't a good place to shop.

Around here, I have to kill them. They have a deleterious effect on the chicken population.
WV=cycom. Two-wheeled collectivism.