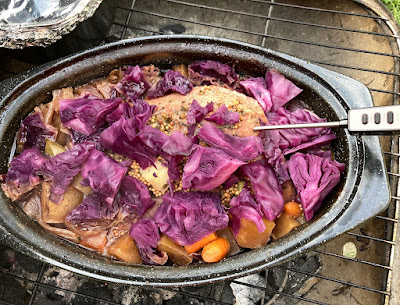 Sunday was a scorcher.  Miserably hot.  Air-conditioning struggled to keep up with the heat and humidity.*  I like making a nice Sunday dinner (that's supper in my house.  YMMV) but there was no way I was simmering something on the stove all day.

And why should I?  I'd frozen a corned beef brisket back when our neighborhood grocer had them at a good price: bought two, cooked one and set the other aside for later.  I had put it in the fridge to thaw Saturday early and it was mostly thawed by mid-day Sunday.  After wasting a little time shopping for a larger graniteware roasting pan (there's a reason for that), I built a fire and while the charcoal was starting, I rinsed the meat several times and put it in the pan with the seasoning that comes with corned beef, a little pepper and some bay leaves.

The trick to this is indirect heat.  Once the coals are going (I start them in a hollow fire, with kindling on the inside and charcoal on the outside), I collapse the "chimney" if it hasn't fallen already and push them into two rows, with a gap in the middle.  For a long roast like this, I add a fresh row of charcoal along the outside, too.  Then the grill goes on, and the covered roasting pan sits on the grill above the charcoal-free gap.  (I could have and possibly should have added a little water, but I didn't.)  I set a timer for an hour per pound -- about four hours and fifteen minutes.  I added staggered timers a bit over an hour apart to help keep track.  (A good job for a household robot.)

Corned beef is salty.  You've got to moderate it.  After an hour, I added a large potato, cut up.  I should have added two.  The potatoes will take up the salt.  By that point, there was a fair amount of liquid in the pan.  Carrots and celery followed an hour later, coarsely-chopped red onion and purple cabbage a half-hour or so after that.

When I was working on the carrot and celery, I decided to hedge.  The pan is a tight fit for everything I wanted to cook.  I have a small grill-friendly saucepan, about 7" across and as tall.  I put a dab of olive oil in the bottom and layered 1" sections of carrot and celery.  When I chopped the onion, half went in the saucepan and I filled the remainder with cabbage.  A couple of teaspoons of butter and a few shakes of smoked paprika and garam masala, an aluminum-foil lid, and it was ready.  I parked the pan on a corner of the grill for the last couple of hours.

The end result?  The meat very nearly fell apart when I lifted it out to slice.  Tam pronounced it delicious and, modesty aside, I agree.  The potatoes were dark and flavorful and both the "sweet" vegetable mix from the saucepan and the saltier version from the roasting pan were delicious.  I ended up combining them and it worked out well.  The broth was too salty; it will get diluted when this comes back as corned beef stew, and I'll probably cook another potato in it.

"garam masala" Wow. It never would have occurred to me. OK. I already have some and there's a brisket taking up room in the fridge. I supposedly have the weekend off from work, for a change. Maybe I'll forget to charge my leash, er, cellphone. Let's be culinarily adventurous!

I have the corned beef. Now I need a grill.

Antibubba and everyone: potatoes, potatoes, potatoes. If you're going to roast corned beef like this instead of simmering it in water, you've got to manage the salt. I rinsed the brisket several times before putting it in the pan fat side down, and the one potato I used was barely adequate. Two or even three big bakers, cut up in chunks (1/2" to 3/4", see photo) would be ideal. Remember, if they take too much salt out, it's easy to add at the table. Roasting the potatoes with the brisket for three hours in a covered pan, they'll come out plenty tasty and if you have too many, they'll freeze for later.

Most versions of garam masala will work well with many vegetables. The batch I made had a generous sprinkling of smoked paprika and garam masala on top of carrots, celery, onion and cabbage, all of which work well with the hint of spicy sweetness. I'm thinking the stuff has clove, cinnamon...wait, let me look. Yep, those are second and third on the list. First is cardamom, then cumin, black pepper and coriander. What's not to like?