It's Five Degrees (F) Out There

Or three degrees.  Or one.  Or even less.  And there's a good stiff breeze, too, 15 mph, more or less.  The TV news is full of advice on how to dress (from a man standing outdoors, hatless and ungloved!), how to wait for the bus (in your car, with your parents, none of this, "Mom, Billy left the Audi running at the end of the driveway again," stuff, at least not until Billy is in the fifth grade) and how to avoid accidents (mostly in the form of reports about people who did not.)

Me, I'm layering up and taking it slow.  After an adulthood with a great many cars that tended to leave me afoot, I try to dress for the weather even when I am pretty sure I'll only have to endure it while dashing between buildings and vehicles: after the engine (and heater) quits, it's too late to revise one's wardrobe.

Worst video of the morning is from a few days ago: a cable TV line tech was working in a bucket truck along a two-lane county road and had set out the regulation number of orange cones at the regulation distance -- which was too few and too close for the slick, slushy road.  Cars were speeding (literally speeding, too fast for conditions and several over the posted limit) towards the truck, trying to swerve too late and sliding off the road, into ditches and yards, occasionally colliding with one another.  It is a measure of human decency -- and plain luck -- that the cable TV truck, with a man in the elevated bucket over the cable and phone wires,* was never hit.  There aren't any seat belts in there; he's supposed to be on a lanyard but that's a fall restraint, not a "flipped out of the bucket like a shot from a trebuchet" restraint.  Be careful out there -- put your phone away! 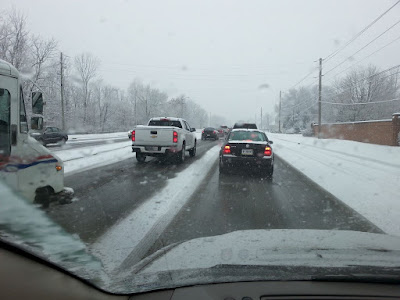 "Do as I say, not as I do?"  Nope. This (phone camera) shot was grabbed in stopped traffic -- there's an accident about a block head, a spun and stuck van closing down one lane, no cones, no flashers and the police were busy with far worse accidents elsewhere.  Naturally, no one was merging until the last minute and the "let 'em in" rate was less than one-to-one.
_________________________________
* The higher you go on the pole, the higher the voltage.  Cable TV and telephone are the lowest levels, often close enough to get in one another's way.  They're usually not best pals and that's part of why.
Posted by Roberta X at 7:29 AM

Email ThisBlogThis!Share to TwitterShare to FacebookShare to Pinterest
Labels: eediots, marvels of nature

Hang onto you hat (and gloves, and good warm boots and jacket) since the weather up here in Minnesnowta is taking an interesting turn for the colder. Low this morning was -6 at the house, another degree colder at work. Fortunately for me the truck has a nice new battery and fired right up despite being parked out on the street overnight (where it lives).

We're supposed to get 8" to 10" of fluffy glueball wormening Friday afternoon to Saturday morning, followed by a plunge into gen-you-wine deep freeze of minus teens overnight. I hadn't even heard that Al Gore was in town.

What we get usually ends up in your neck of Indiana about a day later, so brace yourselves.

You'd think that (just maybe) people would get used to driving on snow- and ice-slicked streets here in the Great Frozen North but I'm seeing more and more drivers who have absolutely no clue that an increase in stopping distance is generally required with a decrease in temperature, much less with frozen exhaust condensation on the freeways. I've been rear-ended so many times while waiting at stoplights that I've given up counting and just depend on the frame-mounted hitch on the truck to help absorb the impact. I'm also mean enough to leave the drawbar and ball in place to center-punch their radiator.

Here's hoping you stay safe and warm through the coming winter.

Doesn't this weather mean you will have to climb an antenna tower sometime soon...

"* The higher you go on the pole, the higher the voltage.""

(Slaps forehead.) Of course it does, I've just never thought about it before. Can't have telephone and cable jocks climbing past "The Wires That Bite" you know. Things like this is why I come here every day.

Blackwing, you think the increase in "drivers who have absolutely no clue that an increase in stopping distance is generally required with a decrease in temperature" is due to an influx of people that come from a land where there is no cold weather, snow or ice?

We've had a huge number of people moving into Minnesnowta, both from other countries and other states. For whatever bizarre reason this state still has a fair number of jobs (despite the socialist taxation policies); it's the only reason we're still here too.

The Somali population in general has no clue how to drive in snow or ice, but they're generally aware of this, and try to stay off the roads (except for the taxi drivers) when it's bad. The vast majority of really bad winter drivers (and I'm excepting the cell phonies and texters here) simply appear to have never in their lives learned how to drive in bad conditions.

I think a major factor in this is the prevalence of front-wheel drive cars and 4-wheel drive SUV's. These folks never consider that their vehicles allow them to get going pretty well, but have no clue that they're actually going to have a hard time STOPPING. It's this difference between today's vehicles and the rear-wheel drive stuff I grew up with. My first car was a '74 Datsun 610 wagon with lousy tires. If you didn't figure out how to drive that in a foot of snow you simply weren't going to go anywhere. I took it out onto a frozen lake and just played with it, learning how to get out of skids, how to brake, and how to get going. We used to set up courses with snow-piles and see how fast we could get through them. I've done that with every vehicle I've owned now except for my current truck (the ice hasn't been very good).

I don't believe that most drivers even consider doing something like that, and the result is the bumper-car collisions we have every time it snows.