I slept in.  It felt goood.  And so is breakfast.  Alas, The Tamara is in recovery mode and nuked herself a glass of chicken noodle soup, leaving me to consume a kind of mixed-grill (bacon, ground sirloin, three kinds of Italian preserved meats) scramble with potato, onion and Anaheim pepper.  With plenty of coffee!

Another nice toy arrived yesterday -- well, I found out via e-mail USPS had tried to deliver it the evening before and left a note, which must have promptly been whisked away by either the breeze or a late-sleeping malefactor; the Postal Service has a slick online presence that allowed me to set it up for pick-up and produced a claim-check I could print out.  With that and ID, I was able to get the package early yesterday -- and the postal worker was quick, friendly and efficient.  His peers appeared to have similar attitudes.  E-commerce may have breathed new life into the old zombie and, Spooner help me, I can't say I object: the staff no longer seems to be mired in misery and pleased to spread it.

Ah, but what was in the box?

This thing with a screen, perched on the Qwerkywriter: 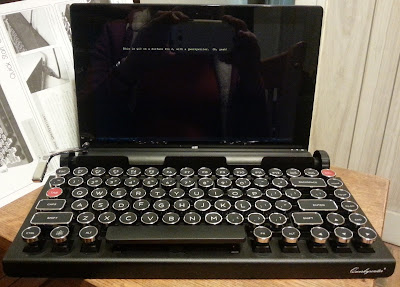 It's a Surface 2 Pro, about twice as fat as the RT (and about twice the price, if you'll buy used and don't mind a few scratches). The Pros have a gen-u-ine Windows desktop, meaning they will run actual software.  This one did not come with Office -- but I have loaded the lovely no-distractions text editor Q10* and the writerly goodness of Scrivener, and I suppose there might be some way to get my paid-for Word2010 on the thing.

I can't deny that this somewhat extravagant purchase was motivated by my recent eye problems. As was the "designated driver" screwdriver.
____________________________________
* Per the programmer: "Q10 will clean your kitchen, walk your dog and make excellent coffee. Well, not really. But it's really good as a full-screen text editor." Which it is.  I do dislike the typing sound, but there's a mute button.  IMO, it's even better than the excellent no-distraction text editor in Scrivener.  But bear in mind that I used PerfectWriter and WordStar when they were respectively CP/M and DOS programs, and loved them.
Posted by Roberta X at 1:08 PM

I still use VTedit on CP/M, best screen editor and it really
understood TECO macros. I use that on sorta Kaypro box
(ofrmer kay made only 5 inches deep to match their fine
keyboard with CMOS 10mhz z80 (over clock to 12mhz) and
a 64MB CF (no floppies) for bulk storage and a few other
things. For a lot of stuff this is a workhorse as it
boots in milliseconds. No screen warm up as the tube is a
high res mono backlit LCD (80 wide by 48 lines). Oh, it
runs on battery too for days.

Geeky but 40+ years of keyboards I have my preferences.

On larger machines like the PDP-11 system its Vteco
or TED and makes a dandy text editor that's also
TECO aware.

On winders the usual is just say no, sorta like poison.

...I'm trying to remember the editor that the old mainframe e-mail program Pine (Pine Is Not Elm) incorporated natively -- Pico? It was pretty good. There was another one I never even got to work, VM, maybe? (Oh, for the dear old C-shell days!)

PerfectWriter, with its wonderful automatic slugged page numbers (AUTHOR/TITLE/##), brilliant auto-table-of-contents and index, and easy embedded commands, is still my gold-standard word processor. Nobody offers anything like it in terms of simple functionality. Word will do sixty-'leven fancy borders with page numbers -- but properly-formatted manuscript-type, I still haven't figured out how to get Word2010 to do them.

I loved Wordstar, too. Used it through version 6, then switched to Word 2 when my then-employer mandated it.

Oh, and the current iteration of Pico is called Nano.

I lost all my old (yet still functional) computers in the fire. It still galls me.

One of my faves was a delightful original Macintosh that I loved to use its clock screensaver as a ...

I just liked the look of the damn thing, what can i say?

On your RT, if it's twice as thick, does that mean they did what they never do when they shrink things nowadays, keep the battery at least the size of the previous generation?

I'm really getting to despise the Device Borg and their ever-shrinking batteries.

Impress me 3 ways, device makers. Next Gen, re-release the previous Gen with a battery twice the size of your newest whiz-bang crapola, and while you're at it, a #@*%@&^ lanyard hole would really be nice since I'm a spaz and tend to drop stuff. (And the third thing you'll NEVER do, put a &%$#@*# SD card slot in it, my media library ain't shrinking, and like HELL will I ever trust anything I value to any damn 'cloud'... The last part was for Apple).

Sorry. Had to vent. I hope your tablet lives a long and happy life.

Meaning, until the ever-shrinking form factor of the SMD electrolytics makes electronics disposable on a yearly basis. I'd rather not be forced to buy a binocular microscope to work on PCBs. Aging eyes. Shrinking stuff. It ain't fair.

The Microsoft Surface product line has a micro SD card socket on each and every one of 'em -- and a standard USB jack, too: you can keep your head -- and data -- out of the cloud(s). Battery life is fairly uniform, with the Pro models (except for the most recent, IIRC) being a little shorter-lasting than the thinner RTs, which is the usual price of more horsepower.

I replaced a (refurbished) Surface RT with a (used) Surface Pro 2. The Pros are thicker, and air-breathing.

Any text editor is better than punching cards.

But on a note for the 21st century, I recommend Libre Office. It isn't perfect, but it does just about everything that MSOffice does for the grand price of zero.