Turducken And All The Trimmings

Here's the bird -- really a turducken roll (with sausage stuffing!), about five pounds.  Our local grocer didn't have any the last time I checked, so I ordered it frozen from Amazon and it was just as good.  The come with an elastic net around them.  I cut it off before cooking and use a few bacon strips to hold it together, pinned in place and to each other with toothpicks:
After an hour and a half: 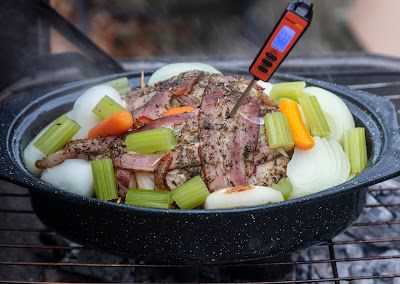 It's not quite done.  Maybe forty-five minutes to go on the grill. I'd just added the second layer of vegetables, and added a handful of dried cranberries right after the photograph.

The first layer is a couple of turnips (underrated as a source of flavor) and a large onion, all cut in wedges.  Celery and carrots on top of that, and the cranberries for a bit of tart and sweet.  I seasoned the turducken with parsley, rosemary, thyme and marjoram (being out of sage*), and a couple of bay leaves.

The graniteware pan is new this year; I've been using disposable aluminum pans, but they're flimsy and call for great care in ensuring the heat is indirect -- you build a fire and rake the coals to the sides.  Even at that, they tend to overcook the bottom when used over the grill.

The pan has lands and grooves on the bottom, and is just thick enough to distribute the heat much better.  The lid is reasonably close-fitting, and that addued up to nice pan drippings when it came time to make bacon gravy! 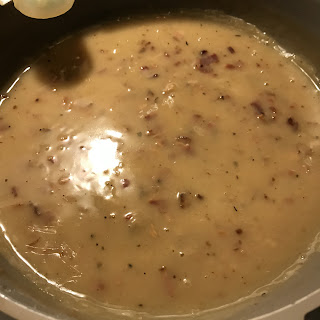 You start with three or four slices of bacon; fry them up, set them on paper toweling to drain, and pour off the fat into a measuring cup.  You want about a quarter-cup.  I used four slices and came up a little short -- but by then, I had brought the turducken pan in and drained off most of the liquid before returning it to the (slightly throttled) grill.  I have a nice grease separator; I poured off the broth (nearly two cups), and added enough of the turducken grease to the bacon fat to add up to a quarter-cup.  I returned the grease to my Always pan, slowly stirred in an equal amount of flour, and cooked it for two or three minutes.  I topped up the broth with water to get two cups, and slowly stirred that in.  All you really have to do then is keep stirring over the heat until it's as thick as you'd like.  It was smooth and had a wonderful golden color (see above).  I crumbled the bacon strips in once I was happy with it.

Mashed potatoes were already done.  There's no real trick to that, though I make them skin-on and dry the cooked chunks over medium heat a little after draining the water.  Stir with a sharp knife to cut up the skins, then mix in butter and milk with a big fork until you like the consistency.†  A little salt helps, but go easy.  You can add various seasonings, too -- garlic, celery flakes, paprika -- but with that gravy, I did these plain.

I fetched the turducken back in and let it sit while I staged plates, then fished out the vegetables into a bowl and lifted the turducken onto a carving board.  The toothpicks came right out and it cut into lovely sections.  We had flat Italian green beans on the side along with all the other goodies.   The gravy was easily the best I have ever made!  A fine holiday meal.  (Watched a movie, too -- see Tam's report.)
__________________________
* Yes, the Simon & Garfunkle song is telling you how to season poultry.   I'm not sure they were eating often enough when they wrote that.

† There are specialized tools for this.  I own some.  A big dinner fork still works better for me.  I use the same one to mix omelet and pancake batter, too.
Posted by Roberta X at 12:58 PM

Email ThisBlogThis!Share to TwitterShare to FacebookShare to Pinterest
Labels: Food, marvels of history

In this castle, we call them 'smashed potatoes', and it's the only way we do that little thing. Much butter, cream if we have it, and enough garlic to make a man almost feel uncomfortable. Lot's of fresh ground black pepper. The water is salted, so none is needed in the final dish.

It's not an everyday meal, being so... so very... rich. Once in a while though, maybe with a side of twice roasted beef to keep it company.