Leaving the house a couple of mornings ago, after nearly a week with no rain, I looked down at the raised flower bed in the front yard and saw something I'd never noticed before.

The flower bed has been empty this summer.  Despite good intentions, I never got around to populating it.  But something had -- something that made tiny, conical craters.  They seemed familiar; I'd seen them before, but where? 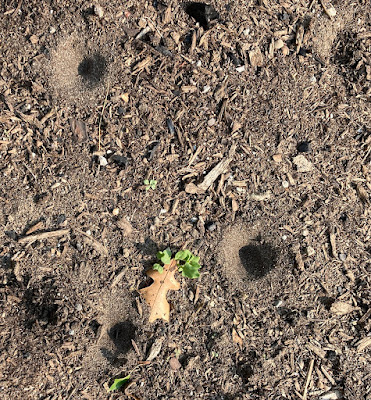 Memory came though at last: these were antlion dens!  Or hunting lodges, or traps.  Ant traps.  I had never known any lived in Indiana.

I tickled the slope of one pit with a blade of grass.  Nothing.  Tried another.  Nothing.  (It turns out some antlions will play dead, if whatever is in their trap doesn't feel sufficiently antlike.)  I tried a third, very gently.

Success!  The antlion began flinging sand toward the end of the grass stem, a tiny, frantic handful at a time!  I didn't want to wear it out, so I stopped.  I never caught sight of the insect's mandibles, which are pretty impressive, spiky implements that will handle even our largest ants.  The antlion's chubby body is a kind of natural ghillie suit, fuzzy-looking and able to keep it hidden and well-anchored.  They're the larval stage of a flying insect; they can spend a couple of years safely hidden, making ants tumble to their waiting jaws, before forming a coccoon and emerging to live for a few months as a good sized, dragonfly-appearing critter.

And the sand-throwing?  While it's entertaining to think of it as analogous to man hunting rabbits with handfuls of flung gravel, what's really going on is that digging out sand at the bottom of the pit allows the sand along the sides to fall, carrying the antlion's dinner with it.  The bug is just tossing that sand up to the edge of the crater, not at the ant.

Out in my front yard, tiny sarlacs lie in wait.

“Tiny Sarlaccs” is the name of my next band.

The antlions are back! Their lairs had disappeared after rain a few days ago but they were back today. One was a little out this morning, but quickly hid itself when my shadow fell across it. And none of them were fooled by a blade of grass tickling the edges of their pit.