I made Spam hash this morning.  I keep a few cans on the shelf and you do have to use them up and buy more; a typical can is good for at least two years.

Spam is looked askance at these days, due to the salt.  You can buy the low-salt version, or you can put the salt to work.

All you need is a large baking-type potato (I was over 21 before I really grasped that there were any other kinds; growing up, we kept a bag of big Idahos in a cool, dark corner cabinet and used them for everything from baked to mashed to fried).  Dice it about a quarter-inch or a little bigger, season it with whatever appeals -- but no salt! -- and start the diced potato frying over medium heat in a high-walled skillet with a little oil.

I used some smoked paprika, onion powder, za'atar and a hint of garlic powder, and a couple of teaspoons of extra-virgin olive oil and butter.  It's best to get the butter melted and well-mingled with the oil before adding the potatoes; you let them brown, shove them around, and let them brown some more.

While that's going on, uncan a brick of Spam and dice it up about the same size.  Once the potatoes are well underway, a process that takes about as long as the time it takes to dice the Spam, add the meat and continue with the browning and rearranging.  There's a trick to it, but you'll catch on; it's got to sit long enough to brown before you push it around, but not so long it burns.  Adjust the burner temperature if it won't brown at all, or browns too quickly.

Once the potatoes are done and the Spam is browned, you can push it all to the sides of the pan, turn up the heat a little, and scramble a couple of eggs in the middle.  Once they're as done as you like, mix everything together and turn off the heat. 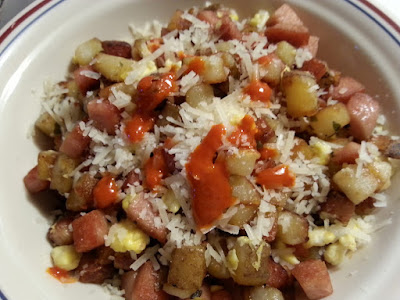 I served it up with a little grated Italian cheese and Truff hot sauce.  Tam took hers with Worcestershire sauce.

*  *  *
While I was sick last week, I was hungry but didn't want to have to cook much.  Tam had bought some Italian-seasoned panko breadcrumbs (hoping for fried green tomatoes from the last of our patch.  Alas, we missed them) and I had a can of corned beef hash.  So I tried putting down a generous layer of breadcrumbs, adding the hash on top, smoothed out, and an egg on that.  It worked very well indeed.

Thinking about it in hindsight, I wondered if rye breadcrumbs were a commercial product.  Alas, no -- but it's not especially difficult to make your own.  I might even try smashing up rye Wasa crispbread.  Add the hash, and a dollop of sauerkraut on top, and serve with Thousand Island or Russian dressing: a ruben-in-a-pan!

I'm going to have to try it.

That's much fancier than what we do with Spam and potatoes. Looks good!