I had not mentioned, but once the curbside shut-off was found, the plumbers came and went in half a day, and left behind a neater-looking installation than they found.  Better yet, it's not leaking. 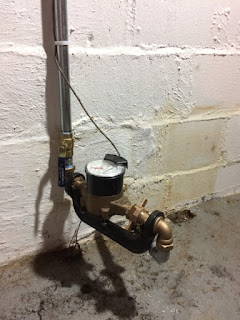 Price was as estimated, which was high, but I consider 65 percent of it as "Bobbi doesn't have to do the work," 20 percent as "Expensive tools you don't have and shouldn't buy," like the threading die for inch-and-a-half galvanized-iron pipe,* and that neatly leaves 15 percent to pay for the parts.  The finished job is clean, decent and there's a union about a foot into the horizontal run (not shown) that should simplify disassembly if we have to do this again in 92 years.

Some reader is going to look at the blotchy black stuff in the floor and lecture me about black mold.  Wrong.  That's coal dust and maybe a little fuel-oil schmutz; smear a fingertip through it, sniff and you can smell it.  This house had a coal-burning furnace for years and years.  At some point, it was converted to oil.  Both are long-gone but, for those of you who remember neither, they're dirty fuels, and every hard-to-get-to or neglected corner of the house has a hidden freight of the stuff, especially the basement.  The plumbers were working right next to the main floor beam and a crawl space opening, and the longer they worked (as water dripped), the more black, oily dust drifted down and the worse that floor looked.  I'll be mopping it later today.
_________________________________
* Or is that 1"?  Inch and a quarter?  Whichever; the kits aren't cheap and the experience to use one on ancient pipe about seven feet above floor level and crowded by a big beam and the gas line is even more costly. Better them than me, and better the learning takes somewhere other than in my basement.  --Speaking of experience, I've got unscrew a couple of aerators and remove the calcium deposits they've collected in the wake of the plumbing work.
Posted by Roberta X at 6:57 AM

Email ThisBlogThis!Share to TwitterShare to FacebookShare to Pinterest
Labels: Geekery, marvels of science

Glad the plumbing issue is finally resolved. I'm finally at the age where I prefer to have someone else do the repairs, though I do regret the financial damage that ensues.

My best to you and Roomie and wishes for a great 2017!

Thank you, and the very same to you!

Looks like 1" pipe, that would be about right for water service. I am surprised at galvanized iron, though. I didn't think that they used it much anymore. Over time the inside corrodes and chokes the flow down to nothing. That is one of the reasons that lead pipe was popular for service lines.

Glad it is fixed, THAT is the important part! Best wishes for 2017 for you and yours, Roberta!

The house my father was born in ('25) was coal fired (suburb of Philly). Big grill in the dining room floor, that had a Persian rug to cover when not in use. I remember seeing coal in the crib/bin in the cellar in the 50's. Which seems typical, seeing as one of my grandfather's businesses was installing/maintaining thermostat controlled forced air heating systems. (Mechanics tend to have the worst running vehicles, autobodymen have the worst looking, etc)

I have a time tracking system he built to monitor when a heater turns off and on, to aid in troubleshooting. Power activates a solenoid that pushes a pencil stub against a platter with paper taped to it, with the platter mounted on a windup clock. Looks really old. Hmm, may have to look at the components for dates, perhaps.

At some point, it was converted to oil, still using that big vent in the floor. When we moved in in the mid 60's, it was changed to a hot water baseboard heater system, still oil fired.

Whoops! Forgot to wish you and household an improved coming year. Less drama and better health, at minimum.

Soaking those areators in vinegar will clean out calcium deposits, but they're likely to be plugged with debris. That happened to me just a couple of weeks ago when I had to replace the pressure tank on my shop system. I removed the plastic parts, and cleaned the holes in the little disk with a paperclip got 'er working like new again. It's easier if you remember to remove the things before turning the water back on and flushing the lines, but I nearly always forget.

Years ago, we converted an old coal-burner to natural gas. Kicker was that the old fellow who owned the house wasn't burning coal; he was burning wood, and he'd gotten tired of having to get up and rake out and stoke the furnace every morning. He was in his 80's, I believe :-)

I subscribe wholeheartedly to the concept of "It's expensive, but I don't have to do it." Several years ago, we replaced our furnace and a/c to the tune of just south of $7K. This seemed out of line till I ran some CPI inflation comparisons and realized it was comparable to what we charged for the same thing in 1972. And I didn't have to do the work.