What's Wrong With This Picture: 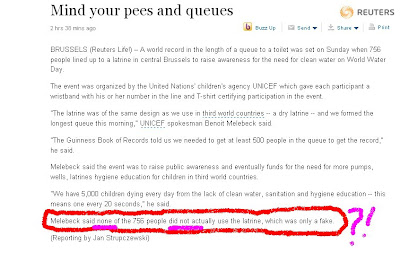 A) "None of the...people did not actually use the latrine, which was...a fake," they write. So the ijits did use it, then? And it wasn't a real loo? Now that's repugnant!

B) If you actually meant what I think you meant, um, that's not a real queue for relief unless people really did, you know, relive themselves, in, like, a real latrine. Sorry, Euroweenies, no record.

C) If the Third World needs more and better damn bathrooms (and they do), don'cha think it might help more if you stopped playing in Brussels and at least sent them a few darn shovels? Some concrete? Maybe even expert toilet designers? (Some motivated and clever Indians have already got a nifty mininal-cost latrine design in production -- and they'll get ya the plans [.pdf] Uses water but 2 liters max per, er, "customer"). Put your muscles where your useless, bleedin' hearts are! --Or shaddup. Srsly. Stop playin' feel-good games with real people's real problems.
Posted by Roberta X at 9:17 PM

I agree with you whole-heartedly, Roberta...stop with the useless demonstrations, give money, time or talent and solve the damn problem.

Instead of just doing something that makes you feel good, do some good. Big difference.

Harsh. I love it.

This is the very epitome of genteel crapblogging. I salute your tact.

Isn't this record broken at every home game at Wrigley Field?

Thank goodness for the trough! No line there.

Maybe typhus and cholera are the Great Green Hope that will cut the marauding Human Race down to a carbon-manageable size. Maybe not.

The prints and plans for a self-contained village sewage treatment unit that will fit inside a fiberglass gas station tank are over 20 years old. Maybe the UN is waiting for the patents to run out. Or maybe, over cigars and 'yak at Davos after the protest march, Someone realizes that cholera and typhoid are the only population control the diverse world will accept.

There are three 1850's tainted-water ghost towns in my county. Yet my town, and the big city next door, won't even consider saving the groundwater treatment network built by better men a century ago, and cannot keep the basements from flooding with backflow from the sanitaries. So the third world is where you find it. A new wave of polio wouldn't surprise me in the least.