I made slow-cooked pork tenderloin in the roasting pan on the grill Saturday, and oh, my, was it ever good! 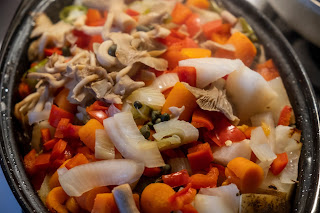 Used my standard pork recipe, marinating the two and a half-pound tenderloin in soy and balsamic vinegar, with some ginger, garlic and, on a whim, a couple of teaspoons of za'atar.  It's a Middle-East spice blend, and despite that, it goes very well with pork.

I set the tenderloin on a strip of bacon for luck (it was pretty lean) and set timers for two and a half hours and an hour and a half.

The second timer was to tell me to add the vegetables, to turn this: 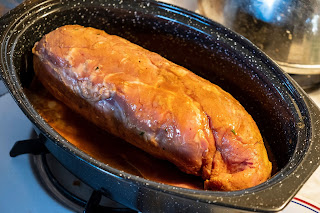 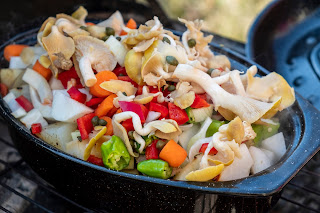 Veggies included a potato, an apple, a turnip, carrots, a red bell pepper, a few shishito peppers, fennel root and golden oyster mushrooms.  Plus some capers.  I was out of onions, and made up for it with a few shakes of onion powder. 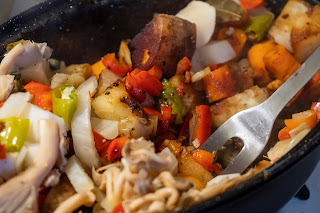 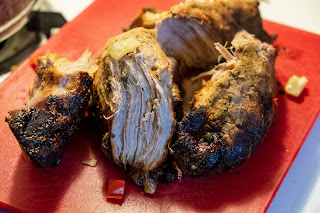 Needed a bit of liquid added before serving, and I should have done so while it was cooking (or just started with more), but I'll do so next time.

Hi Roberta- What size and make is that covered roasting pan, and is this the same you used for the corned beef? Vekim

It's a 13-inch pan, from Amazon, a last-minute change after my first choice was not going to arrive in time for Thanksgiving. It's the only one I own and it has worked out well. This is it.