Yesterday afternoon, I made oxtail stew for supper.  It takes time; once you've got the oxtail sections well-browned and added a little stew meat, it's best left to simmer for two or three hours in broth or stock before you add vegetables and get the meat off the bones and remove the excess fat.  Then it gets another hour simmering, with the big, ugly bones added back in: there's a lot of good flavor in them.

Tam had made a soda-pop run and I asked her to pick up a turnip.  I was expecting one of the near-giant ones our corner store stocks -- but they don't carry Tam's preferred soft drinks.  The store that does have it sells medium-sized turnips in bags of five or six.

After adding a couple of turnips to the stew (along with a potato, onion, carrots, celery and a small can of tomato paste), there were three left.  Frustrating, because they don't keep as well as potatoes.

This morning, it occurred to me that most of the ways we cook potatoes can be applied to turnips, often with tasty results.  Home-made turnip chips are a real treat, crunchy and with a complex, slightly-sweet flavor.  So what about latkes?

My favorite recipe calls for a couple of large potatoes, shredded or coarsely grated and with the liquid pressed out; three peeled turnips is about as much volume.  The binder is a half-cup of flour (I shorted it a bit and added cornmeal to make up the difference), two teaspoons of coarse salt, a teaspoon of baking powder and a half-teaspoon of freshly-ground black pepper.  That gets mixed into the shredded vegetable along with a couple of beaten eggs.  You're supposed to grate an onion, too; I'd used the last one the night before, so a generous amount of onion powder, a little garlic powder and a couple of teaspoons of dried chives filled in for the fresh onion. The end result looked pretty good and the oil was sizzling in the skillet; I dropped in the batter by heaping tablespoonfuls, gave them size minutes and flipped them for another six.  They smelled wonderful and came out golden brown, not as textured as potato latkes and a bit soft -- but delicious.  I knew from the first taste they were a winner. 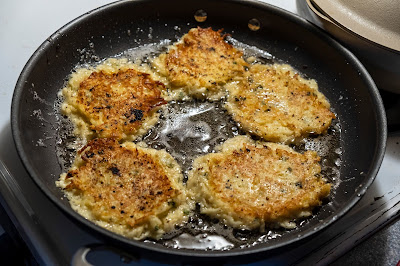 The second batch got a little more cornmeal in the batter -- the shredded turnip was still adding liquid to it and it needed to be a bit more dry.  (They don't drain quite as well as potatoes.)  It didn't do them any harm. 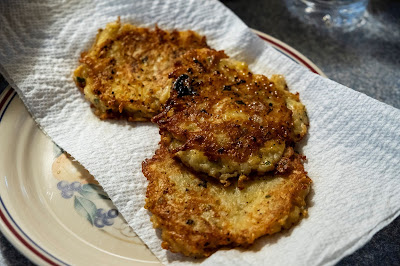 Tam had hers with salt and pepper; I started out eating them plain, then tried a little hot sauce, which was a nice touch.  I think these would be good with applesauce or sour cream, just like the potato version.