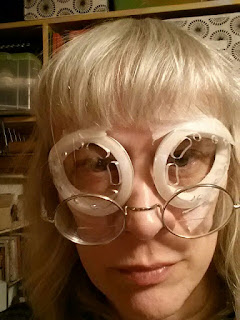 After cataract surgery, they've got me wearing tape-on eye shields when I go to bed.  They protect my recently operated-on eyes, mostly by keeping me from rubbing them while half-awake.  I'm supposed to wear them every night for at least a week -- two days to go.


*  *  *
After washing dishes in the kitchen sink last night using water hauled in big bowls from the tub spout -- two days worth, and I did a lot of cooking Sunday -- the leak is strongly correlated with using the tap in the kitchen, but not with running water down that drain and it doesn't appear to be dripping when the tap's not running.

This is relatively good news.  The previous homeowner did his own plumbing, with a fair degree of competence but a complete unawareness that you can't intermix soldered copper and threaded galvanized-iron pipe, despite the existence of simple adaptors.  Run water through it and there's some electrochemical activity between the two metals; the iron pipe rusts at an accelerated rate, the copper goes green early, and eventually it forms pinholes and weak spots.  There's one of his mixed-metal improvisations under the sink, with a shutoff valve that feeds both the sink and (still defunct) dishwasher and the iron portion is rusting.  (There's a right way to do this when you have to, a "dielectric union" with an insulating material between the copper and iron.  But it's best avoided unless you have no other choice.)

Up top, I have a "coronavirus improvisation:" the actual spout of the faucet had developed small leaks early last summer and I gave it several wrappings of self-amalgamating tape rather than replacing it -- the shutoffs are iffy, one of them being part of the rusting assembly, and I wasn't confident I could identify the right flexible jumpers for the replacement fixture and I didn't feel like having a plumber in just then.  But it leaks, pooling around the base of the faucet and running into the sink basins. I'm not confident it's not trickling down the plumbing connections inside the cabinet, every so slightly, and I'm just not finding it.

The solution to both of these is to replace the whole thing. Th pipes that come up under the sink are 1/2" copper.  I can buy "SharkBite" push-on fittings (which I have used before) and replumb the shutoffs, distribution and end sections where the hoses for the replacement faucet screw on.  I already have a replacement faucet and I have replaced them in other houses in the past, though it's been a dozen years or more.  I will probably have to buy a small collection of parts and a new "basin wrench," a wonderful specialized tool that helps with the hardest part of the job.

I ordered a cheap video borescope that should arrive soon, so I can check in the hidden area between cabinet bottom and floor and see if there's anything lurking there without having to do a lot of drilling and sawing.  And just in case, I ordered some inexpensive plastic washpans: if I'm going to have to use water from the bathtub spout to wash and rinse dishes anyway, I might as well sit on the floor, put washpans for wash/rinse/drain in the tub and do dishes there, and not be slopping gallons of water on the floor.  Yes, it's awful (and I plan to be using paper plates and eating takeout dinners until I fix the kitchen sink), but it should do for awhile.

Email ThisBlogThis!Share to TwitterShare to FacebookShare to Pinterest
Labels: Geekery, marvels of science

Our previous house had been built in 1901 and had mostly galvanized or black iron pipe for supply lines, with cast iron and in-situ poured (molten) lead for the drain lines. The idiots from whom we bought it had done the same thing you've got in your place with a mix of copper and steel, and no dielectric unions to provide the spacer between materials.

We spent years chasing threaded fitting plumbing gremlins through the house walls. The major problem was that trying to fix, say, a shut-off valve in the bathroom led to the loosening of a threaded fitting somewhere upstream in the supply, usually in the wall going down to the basement. I ended up with 1/2" and 3/4" taps and dies for making my own pipe nipples, since nothing was ever the right length and threading the ends of random pipes.

When we remodeled the bathroom (the only one in the house, with a porta-potty in the back yard) I included in the estimates the compete tearing out of the steel piping all the way to the basement supply line, with shut-off valves (nice 1/4-turn ball valves) for both the hot and cold supply right there in the basement, as well as for each fixture, and new copper lines up through the walls into the (2nd floor) bathroom.

One of the funny things was looking at the inside of the steel piping that had been in service for a hundred years. In particular the hot water lines were mostly choked down to a 1/16" hole, with the rest of the pipe being lined with precipitated calcium carbonate. It was amazing that we had enough flow through that size of opening to take a shower.

Here's hoping that your plumbing ventures come out as well as the eye surgery.

I spent a couple of years before retirement as a maintenance man at a mobile home park. I did the work on a number of trailers that the park repo-ed after the renters moved out in the middle of the night, not telling the manager. Of course, after no heat in the winter, the pipes always froze, and I had to replace them. I found it the easiest to just replace the entire run from front to back. Of course this was a mobile home, and I was using 1/2" pex pipe, which was easy to work with. Relatively cheap, and as long as you had the correct tools and enough parts on hand, it was a simple enough job, other than lying on your back under a trailer, in the winter, always in the mud, working just high enough that you had to raise up to reach the pipes. And of course, often we had to replace floors where either a toilet had broken and water leaked in there, of the pipes leaked under the floor and sprayed upwards and rotted the floor from underneath.
I live in a mobile home( trailer) and have since 1997, bought it new. I am having a new roof put on today and tomorrow. I have a soft spot in my kitchen that I will have to fix next week. A new furnace/AC unit 2 years ago, and a new water heater 5 years ago. I don't know how many other things are left, but I hope that I am done for awhile.

Once you've wrestled this particular gremlin into submission, it might be worthwhile, or at least interesting, to get some estimates on re-piping.

In Florida houses are built on concrete slabs and the plumbing is in the dirt below the slab, and if the house is >15-20 years old, it's copper. Which develops pinhole leaks that, if under the slab are financially impossible to fix and very damaging when above the slab (very often, a remodel that involves new hardwood floors automatically gets $4-5K added to cover a re-pipe before the flooring goes in).

Enter re-piping, which involves replacing everything, now using PEX, which save one thing*, is great stuff. In Florida the re-pipe is done through the attic which would not work in Indiana because freezing. But, you have a basement.

* That one thing - copper, through its chemical composition and resultant ion bleeding, will not support bacteria growth; PEX may. Your now remote but former near-neighbor B knows all about that.

Bryan, replumbing has been in my plans for years, but not with Pex. I dislike it. I'd prefer soldered copper, despite the cost. If I did it myself, I'd probably have to use SharkBite push-in fittings (they're widely used for Pex, too). I'm not comfortable using a torch that near wooden floors and walls.

I first saw SharkBite fittings when part of the hot water distribution had to be replaced and the plumber was on a tight deadline. He gave me the choice, with a nice price break for using push-ins vs. soldered copper, and pointed out how DIY-friendly the stuff was. (As in, "Here, I'll show you how to use it." Free training? You bet!) I have since used it for repairs, with good success.

There are some crazy things still in the plumbing here, and someday I'll have them fixed.