Yesterday, I went rushing out of the house without even taking time to post something.  (Everything I thought about writing would have taken too long.)  I had hoped to post on a break from work, but there weren't any.

Yesterday, we got the 6.1 meter satellite dish working.  It's been sidelined for years and last month, trying to install waveguide filters,* we discovered a critical part of it had been damaged by falling ice so badly that it was unusable -- and the company that made it, absorbed by a defense contractor that was in turn bought up by a larger defense contractor, is all but unreachable unless you're calling from the Pentagon, with a price structure to match.  The broken part was effectively Unbotanium; it needed to be lightweight, strong, structurally stable, of precise dimensions and transparent to centimetric-band† radio waves. 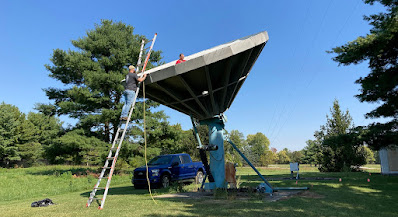 It is, as the contractor remarked, "About the biggest six-meter dish I've seen."

He had been, however, able to clone the part.  What makes that dish so big -- the parabolic reflector is much deeper than a typical satellite dish -- is that is a Cassegranian-feed design.  And this one was worked out to have a very short secondary focus, so short that the secondary reflector is supported a couple of feet away from the end of the feedhorn and held in place on it by an insulating collar -- the piece we found broken.

Cleaning and removing the remains of the broken collar from the feed tube took several hours.  I had cleaned and polished the secondary reflector earlier, a complex casting with a working surface shaped a bit like a streamlined Lunar crater with a central peak and a pattern of supporting ribs molded on the back.  The feed tube, despite my having capped it with a taped-on trash bag, had gathered a lot of bird nests and litter, so just getting to the point of being able to put things back together took awhile.

Then there was some back-and forth making sure the L-band† RF was getting to the "doghouse" where it gets turned into light and sent to the main building of the North Campus, where we turn it back into RF and look at it with receivers and spectrum analyzers; after which there was a little more soul-searching as to the best place to be while we operated the dish and tried to find the geosynchronous arc, the Clarke Belt where (most) comsats live.

We started trying  to run it manually at the dish.  The easiest way takes one person at the dish and another at the doghouse, close enough that you can speak loudly to one another.  One person steers and the other watches the scope.  Man, it was rough going -- a lot of noise, and the dish barely peaked on it. Then we tried from the main building, but results were no better.  So back to the dish, with everything right at the dish, and a little rewiring, and then --

Then the contractor took another look at his spectrum analyzer and decided we'd better give up on C-band* and try Ku.  Results were almost immediate after that; we peaked up the dish on a likely-looking bird, adjourned to the main building, rereferenced the magic control system by telling it what arc position we thought it was looking at, and checked by moving the dish to another memorized position.  Success!

We finished up by going to the satellite most likely to be useful, peaking up on it, and re-rereferenced the whole system.

Now I can get the fancy C-band filters put in.  The cellphone companies won't leave us alone until they can check it off their list.
___________________________________
* Because cellphone services are moving into part of C-band.  In fact, they already have.  But hey, we get free filters!  This is especially helpful if there's a cellular tower right in line with where your dish is looking to see the middle of the Clarke Belt.  As in, for instance, at the North Campus.  That's why it was so difficult to get the dish peaked up by looking at the C-band signals from it.

† What's with all the names and letters, anyway?  Centimetric waves, millimetric waves, C-band, L-band, X-band....  Blame the WW II Brits for the first; it's how they talked about radar frequencies back then and it stuck.  Right behind them, and extending on into the Cold War, the U. S. assigned letters to frequency ranges (the better to confuse the Axis!) and shared them with their Allies; and then, after that war, picked up a few names at the high end: "kurz" is German for short, as in short waves, and the K-band was itsy-bitsy short waves compared to the others.  Just below K is "Kurz-unter," K-under, the Ku band.  And the X-band radar detector you were so happy to buy, back in the day, was named from Top Secret documentation for a World War-winning technology.  NATO, etc. changed all the letters and bands awhile ago but the older version lingers.  IEEE seems to be hanging on to them.  When it comes to satellite dishes, the modern trick is to look at the satellite frequencies -- mostly Ku and Ka these days, with some C here and there -- but send it off to the receiver transposed down to L-band, around 1 GHz.  It's a lot simpler to pipe around with essentially the same kind of coax and connectors used for cable TV.

There has to be some great satisfaction to resurrecting equipment like that, despite all the obstacles in your way.

Takes me back to when I was designing toys like that. Nice!

Our 6-meter dish isn't quite that deep. That dish would be a nightmare in the winter without a snow cover or heaters.

I'll sadly be installing a few filters myself, and at least one of my free-lance clients will be getting a replacement dish out of the deal.

V and W- bands are interesting and an up and coming thing.

Yes, I am pretty sure that you already know that far better than I do.

On the bright side, everyone else aged slightly more than you did yesterday, right?

I'm with you on the tagging of the frequency bands. It's a real mish-mash.