Oxtail and beef shank, in fact.  The beef shank had a big section of marrow-filled bone.  The meat got salt, pepper and some spice mix with garlic and rosemary.  I browned both in a very little olive oil, then added beef stock, canned diced tomatoes and enough additional water to cover, and let it simmer for an hour before adding parsnips and carrots.

About an hour after that, I added celery, onion and some diced purple and pink potatoes, plus a small can of tomato sauce.

Forty-five minutes later, I added coarsely chopped purple cabbage, and let it cook another twenty minutes, during which time I scooped out the remaining marrow from the beef shank and stirred it into the broth, and cut the meat off the bones and into bite-sized chunks.  The bones went back in as soon as they were clear, to ensure all the goodness made it into the stew. 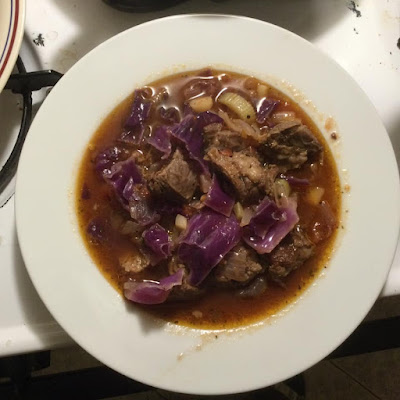 The end result was ambrosial, amazingly rich and flavorful.  Tam and I had two bowls each, and a taste more, and there's plenty frozen for later.  When you have the time to cook it, this is a wonderful stew.

I've been doing something similar with beef ribs that I get on clearance from Walmart. I brown them on the coals in the wood stove, then toss them in a stew pot with the various stew ingredients until the meat separates from the bones easily

Your approach to using veggies is rubbing off on me, thank you. I cut up the veggies on hand a couple of days ago (an onion, a red bell pepper, a tiny bit of zucchini, a turnip, some carrots, a small eggplant), intending to make a casserole. When I realized that I was only 40 minutes from needing to set lunch on the table and I hadn't even started making the white sauce, I abandoned that plan, fishing the carrot and turnip chunks out of the bowl. I nuked the carrot and turnip chunks, then stir fried the whole mess with olive oil. Delicious. Husband eschews anything that is recognizably a real vegetable and counts corn and beans as his veggies. He ate seafood salad, cubes of cantaloupe, and a corn fritter while I ate my (small - 8" D) plate full of veggies and a corn fritter.