A Lesson In Two Charts

When I write on factual subjects, or even express opinions based on facts or someone else's notions, I try to include citations and links.  I ding commenters who try handwaving "studies show..." in an attempt to buttress their claims.  --What studies, where?  Who did them?  Who wrote about them?  Did you read those "studies," or are you just passing on what some guy's second cousin thought she read in a Twitter post that someone screenshot and put on Facebook?

Here's an example, as called out at Roll Call: 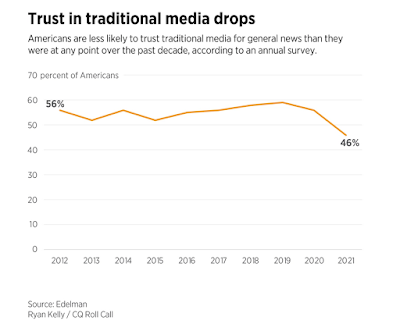 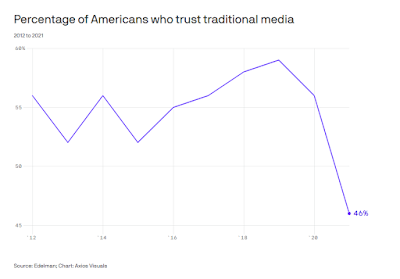 Two charts.  Same facts.  One got the "unused" part trimmed off -- probably innocently enough; Art Directors and Editors loathe empty space, and those charts have to show up on a smartphone screen!  But in fact, the "empty" space here is chock-full of information that you cannot otherwise take in with the same glance that reveals the up and down path of consumer confidence in the news media.

Present facts, not rumor -- and present facts clearly.  Always take a second, longer look before you share -- put that ten percent drop in your trust of media to good use, instead of elevating idle rumor to the same status as hard news.

Email ThisBlogThis!Share to TwitterShare to FacebookShare to Pinterest
Labels: Essays, The press of the Press

I'm a biologist who teaches stats as well, and one thing I always always tell my students is "don't truncate the scale!"

but you see that all the time in news reporting. Sigh. I guess "the sky is not falling yet but it has lowered slightly" doesn't get eyeballs.

When I was 12 or so, I found a little book in the school library called "How to Lie with Statistics." The manipulation of graphs and charts, as you showed, was something from it that stayed with me.

The first chart trims off 70&-100%, making Media trust look higher, right?
The second chart trims off both the top and the bottom, making the changes look more dramatic, correct?

Overload: the first one does have nice, large numbers at each end, so you know it started out at 56% and ended at 46%; they're not hiding it. And by including the range to zero, it normalizes the vertical scale.

The second graph, with an expanded vertical scale and only marking the 46% end point, implies that public confidence must have started out much higher than it actually did.

OK, I see what you saw