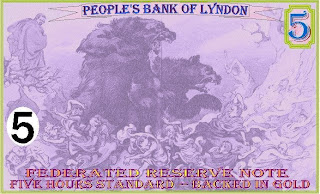 Fine, I figured, that's that. I'd've bet one of the big ol' Lyndonfins all the thrills were over, Em will spin the big worm-drive reinforced butterfly valve shut, ending (or at least greatly reducing) the risk of surging graywater negatively affecting stability,* not to mention fountaining up in half the showers and sinks. Plenty of time to get back to the Engineering Shop and join the guys in making mock of the whole mess. I stood up--

--And saw the glow from various displays that usually shines into the corridor from the Bridge go out and every widget in earshot went "bhwoooooo" as the cooling fans in 'em spooled down. In the utterly howling silence that followed, Russ, who never swears, said, "Oh. Sheeet. Bust it -- this Jump is not happening." Followed, of course, by the general hubbub that breaks out when things go awry. I could still hear Russ, asking Navs to update the scenarios for the next window, and then his voice both directly and via intercom and paging speakers, "Engineering, Power: techs to the Bridge."

The Bridge looks like a cross between Mission Control and a TV control room, dominated by a wall of displays, two of them huge ones, one usually showing the ship's present position overlaid with the postions and trajectories of every known, detected and predicted body (ship, planet, blob of stuff, etc.) in range and the other likewise for the (intended) point of arrival after jump. A couple of Imaging techs on the bridge, backed up by a lot of computer, sensor gear and support staff keep them up to date. The same displays show other data as-needed and are flanked by a couple of dozen smaller ones. Each position has its own array of specific displays and controls, with the Pilot's area front and center, flanked by a couple of Navs types; other positions are behind that row on three higher levels.

There's a Power Room tech on the bridge, two rows back. He can see what each of the three fusion/MHD reactors are doing and the realtime load distribution. Port and Starboard reactors back one another up and the main propulsion, control and environment systems run from Central, with Port and Starboard as their backups. Major systems like, oh, the Bridge have dual power supplies on everything, running from separate UPSes to float 'em through switching from Central to P or S: there is No Way any single point of failure can kill the bridge systems. Except one just had.

...That's what I was thinking, only more like ThereIsNoWayThisCan'tHappen-NormalLightsStillOnWTF? while running towards the electrical room and UPS compartments aft of the Bridge. Fast as I was, Conan the Objectivist had beat me to it and had the hatch open to the #2 UPS, his hand on the emergency bypass switch.

"Dead! And it didn't bypass itself! I'm flippin' the bypass now--" Followed by a ker-chunk! The output metering came up and current looked awfully high, right at the rated limit.

Guy from the power gang stuck his head in the hatch -- "Hey! Okay, it's you guys, but dog-gone it, power's our worry."

Yeah, yeah, like I'm not an adequate jackleg electrician. I shot back, "It was just about everybody's worry, Slim, the Bridge went dark a couple minutes before Jump."

"I noticed. You know we had a rebuild scheduled for the Number One UPS?"

Conan chimed in, "Yeah, saw it on the ops orders -- for day after tomorrow."

"Okay, unh, look, we've got some new guys on this--" (I'm not surprised, it's a crummy job) "--and they decided to get a head start; looks like graveyard shift last night, they moved all the bridge loads over to Number Two--"

I gave him a Look, "Leaving the entire effing Bridge on a single UPS? Which has crashed, but hard?"

"Er, yeah. We gotta change this back. Has Engineering added anything new in the rack bays and not told us? That UPS should have held, even by itself. An' can you help here? I'm not askin' you guys to cover anything up but the way I figure it, the sooner we get power back to normal, the better it's gonna be for everybody."

Ain't that the truth! I spent another hour helping, as more and more of the Power gang showed up and took over, then went back past the Bridge -- dark and mostly quiet, though Russ was still at the pilot's console, intent on displays, no doubt for the next Jump window -- and into the rack bays, to see what needed rebooting, recalibrated, reset or solidly thumped to get everything ready for our next chance. Worked my way into Drive Control, tech on duty waved (Hi, Curtis) , and Jonny Zedd looked up from where we was nodding over the Insystem Drive panels, "Hey Bobbi, that Lootenant Luna, he was really a-jumpin' at the bit about missin' our window!"

It's always something but some days, it's more things than seems probable and way more than you'd ever want. Buck Rogers had it easier!
____________________
* As in, "The ship may lurch around and emerge into rational space some significant distance away from the intended location." Which could suck. Possibly hugely.
Posted by Roberta X at 8:34 PM

Nicely done. It was never the tech difficulties before, during, or after the jump that troubled me, but the being out of N space itself that was my problem. I have faith in the techs, they wouldn't get there if they were untrustworthy.

Kind of makes that old "hey I changed the photo sensor on my garage entrance lights" look REALLY lame.

Interesting bank note..."Five Hours Standard"....like the artwork too!! Where is it from?

Each one is better than the one before.

Joseph, it's actually a political cartoon, depicting the President as the prophet Elijah. Somehow it seemed perfect.

Hmmm, never had a big UPS fail before. They basically have three options; online, bypass, and shutdown.

You could really do an alt-history/sci-fi book series out of this.

We can discuss it on our honeymoon.

I've had big UPSes fail badly, Sam; in fact, the story I wrote is essentially true, at least in that part (and in the trouble contacting Emily). I would never mention Litton by name but I hear there is one brand of UPS that has failed with not (bypass) output twice for my emploer. We started adding external automatic bypasses to the new ones but it's a pricey addition.

...Honeymoon? Where you taking me? Are we rich? 'Cos if the economy crashes hard enough, I'll be looking into that.

Hank Morhan, I'm a-gonna blogroll you unless I hear different.

I guess our UPS maintenance and monitoring contracts were worth the money, then.

As for the honeymoon, no we're not rich, so how about somewhere nearby and warm? Although I served in the South, I've never actually been to the Gulf coast. Either that, or I want to see a shuttle launch before they're done.