UPDATE: Shot the gun today at the range with the Data Viking, Tam and Shootin' Buddy. Got (mildly) hammerbit. Pull is way too heavy. Feeds (JHPs, all I had) fine, hates the Kimber mag it came with, works well with a real-Colt GI magazine. The tiny sights are not bad. I'm thinkin' a drop-in beavertail, sear work (chipped, nasty edge) and maybe a set of Trijicons -- and that's work I'll have a professional do.

Tamara found a "Corvette parked in a barn" and a rare and exotic one at that; me, I maybe found an MGB with a "For Sale" sign in someone's from yard.

I was doin' the noseprints-on-glass thing, lookin' at Colt revolvers,[1] Star semi-autos[2] and wild and crazy air pistols with no intention of buying, lookin' for Webley and Enfield revolvers[1] (455: Revolver Not Found) -- oh, yes, at 1911s generally, just 'cos. (You know who designed that gun [PBUH]?)

It was. Took a closer look. Wasn't all hacked up, just some Hogue "G00dyear" grips. Had it out of the case. Asked the man what he wanted, 4 was it? Thought. Offered three. He came back with $350, American. Sold! 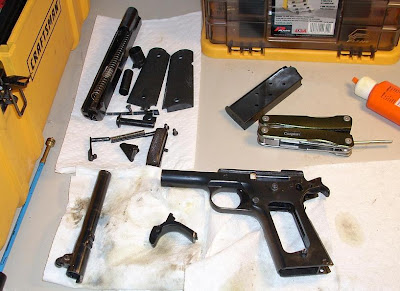 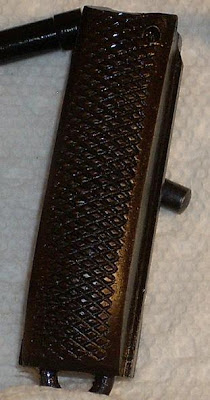 Of course, I had to take it apart as soon as I got home.[3] It was in this state when my brother called and it had to sit awhile.

Recognize it? There's a clue near the center of the photo.
Here's a closer look. Should be pretty obvious by now.

...And now a side rant: when I detail-stripped this gun, there was A) Rust under the aftermarket grips. Rust. Geesh. B) Worse, I cleaned caked grease off a lot all of the interior -- grease and soot from the trigger and its grooves, grease from every spring, corner, hammer-hooks and sear -- everywhere! And sticky, Cosmoline-type grease at that. So as near as I can figure, previous owners took the thing out of the box, swapped out the grips in a light drizzle, shot it some, and (based on the barrel as well as evidence cited above), never cleaned it.

Y'know, guns work dirty; service sidearms are expected to run just fine filthy. But there is a point where the grunge, muck and yeech makes them stop and why in the name of all that is right and proper woulja ever wanna start out with a sticky-grimy gun? I don't get it. I just don't get it.

So, if you're still wondering, the denouement (with rosewood grips loaned by Tam) follows, after reassembly and in close-up... 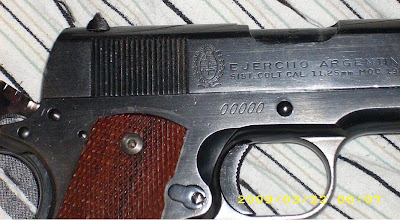 3. For the sharp-eyed: I had the detent pins & spring assembly out, cleaned it and its housing, and put it right back in. They like to run away and hide otherwise. UPDATE: Removed, cleaned and reinstalled the magazine latch, too and for the same reason.

4. People make fun of Microsoft Paint but it is not so bad as all that.
Posted by Roberta X at 12:15 AM

Knurled trigger, or is it checkered? That was unique to the Argentine Colts, or does my memory fail me? I don't know about the backstrap. Nice low serial number! Must be the first one they ever made.

I've read a bit about their history, but just a little. Nice find!

Oh... in my youth, I had a Webley revolver in .38 S+W. Heavy, clunky, and steam-punkish even in it's day. Loved it. Stolen away many decades ago.

I'm thinkin' classic double diamonds in walnut or a similar hardwood. Got any to sell?

The original .mil.ar grips were black plastic which makes the grippy black rubber ones not a totally poor stylistic choice, just tactikewly unsound, since they grip cloth: draw and present your gun, bring along a handful of blouse, so very indelicate.

Turk, the trigger and mainspring housing are both checkered in a pattern unique (AFAIK) to the Sistemas. Big ol' wide hammer spur is, too.

Carteach), *I* miss your Webley, and I just found out!

To stay en genre you ought to look into something exotic and even Souther American than rosewood--preferably a species that reflects major damage to the rainforest. Imbuia, maybe.

Do you have to practice eating churrasco with a gaucho punal now? "That's not a Sears poncho"...

Nice. Whats on the opposite side of the slide?

Mine was bereft of all finish, looked like a poor nickel job. So I didn't feel bad about a little custom work on it.

"draw and present your gun, bring along a handful of blouse, so very indelicate."

But a pretty good diversionary tactic.

I have a Webley and agree with your description. I'd love to have one in .455, but they are hard to find and expensive when you do.

It is kind of cool looking, though.

Sorry about not bringing .45 acp ammo to the range today, Bobbi.

If I found a Systema like that, I'd snatch it too.

Consider it a "Spring" present. Any excuse for a gift to yourself! :-)

The contemplation of this question will only lead to evil. (Yeah, like I need a DW Supermag to put holes in paper.)

But if the answer is important to you, a possibility is: make sure it's stored with grease in the barrel so it doesn't end up pitted with rust after only a couple of months. Not that I discovered this from experience or anything. (M43--I don't have the M40, either. But soon! I hope.)

The lanyard ring is intact, just has a piece of paper toweling looped up over it.

Oh thank God! The sharp edges fooled me and lead to believe it had been cut.
I say it's a swell lot more than an MGB in the front yard, it's a Sunbeam Tiger! Rowr!

I like the double diamond rubbers on my 1911, they don't really grab clothing as much as some people think. I don't have any DD walnut's I'm willing to give up at this time, but I do have some old plastic grips that would do well on it if you're looking for authentic. LMK