Sundays tend to be a reflective day for me, a day for thinking, reading...and eating. Havin' a boarder doesn't change that, it simply reduces the amount of leftovers. 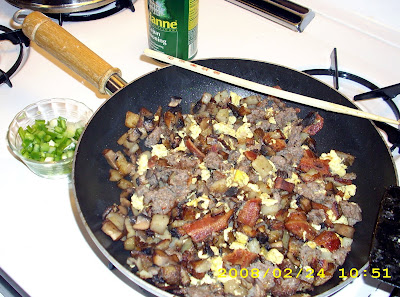 Started with an, ahem, basic breakfast: sage sausage, peppered bacon, portabella mushrooms and diced skin-on potatoes, all properly fried up with a little cajun seasoning on the last two items, with scrambled eggs with a dash of Worcestershire. The green items over at the right are a very mild chili pepper and some mild green onions to sprinkle atop it right before serving. I should've added some Jarlsberg Swiss cheese.
Your cardiologist will shake his head at this treat and he's right. He's also not having any fun. 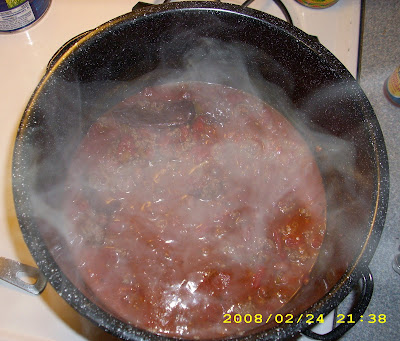 Much later in the day: Chili!

I make the stuff with mild canned chilis, whatever bean suits my fancy, plenty of ground beef with a dash of chili powder and Red Gold (tm) tomatoes, usually a can of the "chili ready" and a can of crushed. Real-chili types will find it a bit plain and look askance at the beans.

Tam convinced me to try some chipotle peppers in sauce (there's one lurking about 11:00 in the photo); three was more than enough for me and I'd suggest starting with just one if you've never tried them. However, the taste is just s-m-o-o-t-h and the smokiness adds a nice depth.

It's not insightful commentary, I know, but you've got to feed yourself in addition to the Inner Person. ...Plus I like to show off my 1337 k1tchen skilz, modest li'l gem that I am. Lemme at that can-opener!

Email ThisBlogThis!Share to TwitterShare to FacebookShare to Pinterest
Labels: Food, the wonderfulness of me

well, ya gotta die of something. Looks delicious!

Too close to Manhattan style. You gonna put bell pepper in there too?

Tomato? Cinnamin? Beans IN the Chili? Tuna? Bananas? MADNESS! Madness, I tell you.

There was a disclaimer.

I've got Cherokee ancestors. The use of beans is required in nearly every meal. They won't tell me why 'cos my Nobly Savage ancestors snuck off to be U. S. citizens intead of good little Injuns.

My compliments to the, uh, is there a feminine form of "chef?" person in charge of the kitchen at that time.

The breakfast dish looks very interesting and I'd like to try it some time. But - - Swiss cheese for breakfast!??! I'm frankly dubious, but I'd try it . . . .

As to the chili: Yes, I'm a proud Texan who loves to eat. As such, I'm required by statute to hold strong opinions on the topic of chili con carne. I know what I like and what I expect to be served in a cafe in Texas. I know what I cook when I do chili in my kitchen.

On t'other hand, I'm encouraged to see this sort of experimentation and seeking-after-the-truth out in the midwest hinterlands. Therefore, I'll certainly not be critical of y'all's efforts. At least you're still starting with meat from a warm blooded, hoofed, animal combined with chili powder and whole chili peppers. Chipotle? Excellent idea. I've never but plan to try it.

I fully agree with Jovian's horror of bell peppers, but the beans MIGHT POSSIBLY be viewed as a cultural/regional/ethnic thang.

Bon appetite to the both o' you.
JPG

I pepper therefore I snark.

Beans are a must in my chili, too...and as a bonus the fiber might help with Tam's little um..."problem".

Oh, I concur with the chipotle pepper.

And I'd prefer to leave Tam to her privacy when it comes to bean products.

Excellent breakfast.
Don't forget the Rotel in the chili.

Beanless chili con carne seems to be a Texan purist thing... out here in NM the unforgivable sin is not using at least some real chile in addition to the powder. And, of course, it can be red or green, though fans of green chile stew often omit the meat, making it a different dish entirely. Beans or no beans is a non-contentious issue.

Our version involves several varieties of local chiles sliced and simmered with the stew, then fished out and discarded before serving. Adds a lot of flavor as well as just heat that way. We also prefer to brown some stew beef in various seasonings and use that for the meat- more flavor and texture than the regular grind.

And, of course, there's the Secret Ingredients, but those are our essentials.

Also, that breakfast looks delicious. Perhaps I'll pester Stingray to apply that shiny new meat grinder of his to making sausage for our own version...

She offered to go beanless to make my carnivorous heart happy, but I demurred since I was mostly watching. I'll et what's set in front of me, beans or no. :)

Missed it by that much.

Onions aplenty, my salivating dear, in the Red Gold "Chili Ready" tomato product. (This is a local brand, which I can promise tastes like sunshine, even if you don't put it in chili. There are at least seven different versions, three with seasonings).

"Havin' a boarder doesn't change that, it simply reduces the amount of leftovers."

Ok, as I have grown in my chili tastes, beans go on the side, the only things you need in the chili are coarsely ground, or chopped, meat (of the hooved variety) chili peppers, chili powder, cumin, flavorful liquid, and masa harina (for thickening) ok, salt and pepper.


Oh and as for chipotles, I smoke my own.

'Berta, I'm proud of my chili.

And I'm a Texan man.

And, like most proud Texan men who cook chili, I assume that I'm right.

I like beans with my chili. With. Not in. I sometimes stir some in from the bowl on the side. I do the same with my cornbread, but you don't see me cooking the cornbread into the chili. (anymore)

I'll give you my winning chili tip, for free. I've been carrying it around as a secret, but here it is, for you.

When you make chili? Don't use ground meat of any kind. Getcha a hunk of cow or deer, and begin dicing it with your biggest, sharpest chef knife on a cutting board. Don't dice it to the size of a playing die; dice it much, much finer. About 3/16 to 1/4 inch to a side. This takes quite a bit of time. It also takes a bit longer to brown.

But the texture is so worth it.

This is turning out to be a wonderful education on chili styles and what constitues the canonical article!

I'm with you, MattG, on the meat. Ground beef is a "field expedient" that allows me to turn out adequate chili in 15 minutes -- and better the longer it simmers.

Beans are filler and the further North one gets, the more likely they are to show up. Perhaps we need the insulation?

Not to poke a stick in the pot to stir it, but I enjoyed this post and wanted to click over to Tam's to see if she'd blogged about it too, but -- there's no link to VFTP?

D'oh! There it is. I'm blind without my glasses, sorry.

If you want to go really New Mexico/West Texas regional, use the leftovers for Frito Pie.

Open bag of Fritos. Dump leftovers over Fritos. Cover with shredded cheese. Nuke until chili is warm and cheese is melted. Enjoy. You'll see these at any worthwhile lunch counter in NM and some places in TX.

Something about the structure of the Frito lets it stay crunchy even when it's coated in melted cheese and chili...

Among Latinos in the Central Valley of California, they're called "Frito Boats." I learned about them when I first visited my wife's family. Mmmm good.