Looking South-Southeast, including the City-County Building (handgun carry permits, first floor), the Indianapolis Heliport, the jail and some of the railing, complete with tower-climber knots. 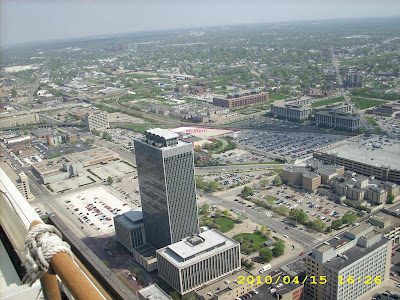 Looking South-Southwest, the former Merchant's Bank building (with the red-painted base of the tower that used to stand atop it, site of the city's first TV transmitter [assuming P.R. Mallory never had theirs on prior to or during WW II]. I've been in there, back when there was still a tower and the last broadcast tenant was a little low-power TV station), Union Station, the bizarre painted rooftop of Circle Center Mall (itself neither circular nor in the center), the Incinerator (way out there) and the downtown power plant. --Oh, and some ghastly monstrous stadium in Brutalism-meets-Retro style. Plus the other end of the railing and another knot that trails frayed ends. H'mm, hope that worked out for 'em. 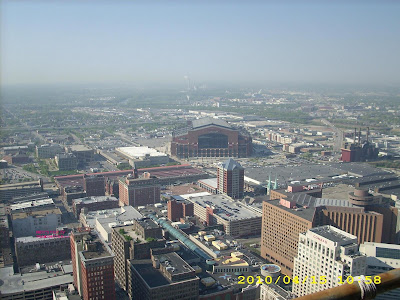 As ever, clickee maketh big, with a few notes on each photo.
Posted by Roberta X at 9:30 AM

Email ThisBlogThis!Share to TwitterShare to FacebookShare to Pinterest
Labels: marvels of marvelousness

Great Photos, Roberta!! I'd have to work hard at being that high, I don't deal well with heights....

Now, now. It's not an Incinerator; it's a Mass Burner.

Or so it was sold to us those long years ago along with a mess of pottage.

Where are the mountains? I can't see them.

Interesting knots.
The first looks like some kind of doubled up double half hitch and the second one looks like a weird constrictor knot.

What does it say about me that I was hoping for pictures of the connector?

It's a 12-pin MS connector. I can take pictures of the old ones, prolly later this week.

...Just reminded me, I need my "oops" arbor for hole saws.

I dunno about those knots.