It was a nice day for it -- sunny and a bit crisp; Tam and I even rode our bicycles! (This was to not work out so well for me, after...) We ate on the patio, beneath an awning and under the very shadow of the turtle-threatening statue: 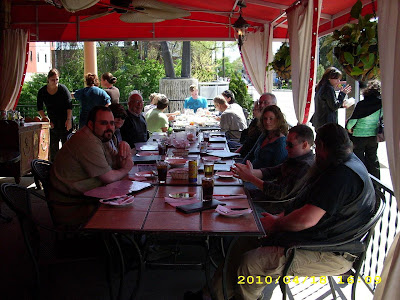 Clockwise from left: The Jack, The Tam, where I would be if I wasn't taking a photograph, Old Grouch, Mrs. Shomes, Mr. Shomes, Joanna, Caleb (!!!) and Mad Saint Jack.

The food was...simply faboo. Possibly better than that. The sangria was good, too. And Old Grouch found something....interesting...on the Google Maps shot near the old coke/gas plant and challenged us to ID it. (I did, and it is astonishing how much sense it made -- I had been puzzling over that image for days). If he doesn't post it, I will -- very kewl.

Conversation was as wide-ranging and fun as ever and service at Canal Bistro, in keeping with the food, was first-rate.

All was well, except heading back, I put a burst of speed on, pulling up on the handlebars, and my left elbow, which has been very sore and a bit weak, suddenly got a lot worse. It hasn't got much better overnight, either. "Tennis elbow" and I don't even play the game.
Posted by Roberta X at 8:14 AM

Wish I coulda been there. Next month for sure!

"Faboo" is putting it mildly. Best spinakopita I've ever had, and that's saying something.

Sorry I missed out. Hopefully next month.

Excellent meeting (as usual). Food was terrific, too-- wouldn't be adverse to meeting there again.

SB: stretching it was what got me in trouble in the first place!

O.G., Joanna -- I have been impressed by the food at Canal Bistro from my first visit. It has been consistently excellent. We will definitely return -- especially considering they didn't blink at the size of our party.