The interociter is a fine bit of science-fictional window-dressing, first encountered in the novel (and later film) This Island Earth* by Raymond F. Jones.   The first portion ("The Alien Machine") of both book and film is a genuine geek-fest: research scientist receives some oddball electronic components and an even stranger catalog, orders a kit from it and proceeds to build a strange machine.  Once the machine is assembled and turned on, a person appears in the inverted-triangular screen, congratulates the builder on his skill, and invites him to join an elite group of other scientists.†

So I was looking up this widget the other day, double-checking my spelling, and found the Wikipedia article about it has a section called "Other Appearances."  The thing is a trope, after all, probably more widely known than the ansible, so it's no surprise it gets shout-outs here and there.

But the very last entry in the section says this: "An Interocitor appears on the label of Café Bustelo. It depicts a woman on an interocitor video screen enjoying a cup of Bustelo coffee."

H'mm.  It struck me as unlikely.  I like a good cup of Cuban style coffee from time to time and Café Bustelo is an excellent version, but does it really? 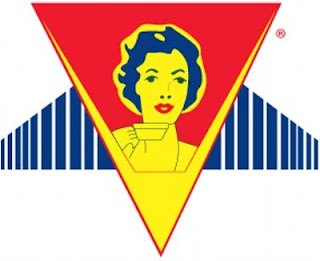 Memo: do not hire graphic designers who spend excessive time at the movies.  "Welcome to Metaluna -- regular, or decaf?"
_________________________________
* Quite successfully given the Mystery Science Fiction Theatre 3000 treatment several years ago.  The remainder of the film is not nearly as much of a geek-fest and the collection of nifty, mostly RCA gadgets that makes the first part such geek catnip does not continue.  On the other hand, what looks like a first draft of the bridge of the Starship Enterprise is used for a lot of it....

† This is what we all hoped would happen when we finished building a Heathkit back in the day.  Can't speak for anyone else but it certainly never happened to me.
Posted by Roberta X at 7:37 AM

I can see a modern day remake of "This Island Earth" where the scientist, preoccupied with the demands of the Student's Intersectional Collective Against Oppressive Math and Science, passes the stuff off to a grad assistant, who's busy with his thesis and so passes it off to a sophomore, who puts everything together and goes and has the adventure and saves Earth from being taken over by the Metalunans.

I would have assumed that was a recruiting technique to staff the Hidden Frontier...

Now that Heathkits are gone I guess app programming or Maker labs are the new recruiting grounds.

Who says Heathkit is gone? Did you not follow the link?

It's evergreen. "Hey, kid! Do you want to live forever, or do you want to defend the frontier against Xur and the Kodan Armada?"

Roberta, I followed the link. It is nice to see they are hanging on in the 21st century but hanging on is about it.

Heathkit went entirely away; the new Heathkit is a reboot.

"Can't speak for anyone else but it certainly never happened to me."

Nor I, but I did receive quite a tingle due to a little mismatch of wires when, with one hand grounded, the side of my neck touched the long wire antenna on my Heathkit GR-64 SW receiver. Good times.