Tam and Shootin' Buddy are essaying to breakfast and the Indy 1500 Gun Show.  Me, well, I need to ice my knee; maybe I'll drop by the show later, maybe not.  The sidewise slow shuffle is especially challenging.

That leaves me with time on my hands and leftover supplies from Friday dinner, so I made an overstuffed omelette, filled with bacon, onion, Poblano pepper, little picked red peppers and Parmesan-Romano-Asiago cheese.*  The eggs were fortified with crunched-up corn chips and a little water (Tam's not a fan of the chips so I save that for solo breakfasts), along with some Italian-type spices.

Leftover supplies were from this: 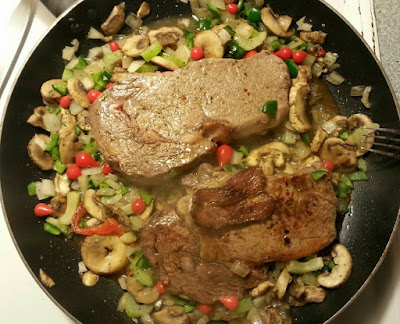 Ribeyes started in a little bacon fat with mushrooms, onion, celery, Poblano pepper and little red pickled peppers, all cooked in black-truffle butter, mostly uncovered. Bottom steak is medium, top is rare, cooked 3 min per side and a minute on the long edges. Mushrooms start with first steak, followed by onion, then celery.   Poblano goes in right before the second steak, along with the little red peppers.  Steak salted, peppered and allowed to come to room temp before cooking.

Timing on the first steak was 3 minutes per side, more or less, three times in a row, the last two with the other steak in the pan.  Mediumish heat or a little higher. Some fennel seed, parsley, garlic, basil added after the mushrooms had about six minutes to get interested.
___________________________
* Our grocer buys this in huge wheels, cuts paper-thin slices, packages small quantities and sells it as "Shaved Italian Blend."  There was giggling when Tam and I found it.  I mean -- really...!
Posted by Roberta X at 8:48 AM

Be nice to that grocer. Some of them try to pull one over on you. He is doing the opposite. On that breakfast, I had some brats. At least I am trying to up my game, if but slightly.
And I asked Tam a question about camera lenses the other day, which she was so quick and gracious to answer, I had to mention it to you, since I have also had you answer questions in the past just as quickly. It must be something in the water in your house that makes you ladies so kind. I suspect that actually, you are both just very kind, as a rule.
But I hope that your knee holds up, as you were hoping for. I spent 35 years making the types of cobalt based steels, among many others, that is used in replacement parts. Best wishes to avoid them, for as long as you can. They are good, but not as good as the real thing.