It felt so self-indulgent.  Six in the morning, but my body tells me I have laid in bed until noon.

This is the easy direction to turn my clock and I can usually do it in one go, or one and a half: got home at the usual time yesterday, went out to lunch (my supper) at a new place, came home and went into the "instant off" sleep mode that I have been getting the past few days.  Woke up five hours later, turned the bed back into a couch, did a very little housework, ordered in dinner for Tam and myself, and looked at television for awhile,* interrupted by a call from work wanting talk-us-through help restarting a computer after a power hit.  After all that excitement, I turned the couch back into a bed and dozed off with an ice pack on my knee and a hotpad under my back.  I woke up once to change out the ice pack and along about 0430, started drifting back towards wakefulness with the delicious slowness of a manatee rising, blimplike, from a  creek bottom nap to take a breath.

Huck showed up at 0552 on the dot, in case the alarm clock failed.


*  *  *
The "new place" is Next Door, located way down at 46th and College, several trolley stops south of Roseholme Cottage.  The slow wave of revitalization is picking up all the little "business corners" that had grown up at the streetcar stops and changed over the years.  Many have dwindled and come back in a new form more than once.  46th and College is an interesting one: for years, there was an independent gas station on the southwest corner (long gone now, underground tanks were suspect), a little block of shops in which tenants came and went on the northeast, a church with a lawn and parking lot on the northwest, and on the southeast, a remarkable bit of 1930s streamlined deco with a small parking lot, occupied by one of Indiana's local "7-11" minimarkets, later renamed "Double-8" and given a nice paint job in an ultimately unsuccessful effort to update their image.  By either name, the tiny grocer served the city's poorer neighborhoods and when the chain went under, their former clients were left with traveling miles farther to shop at the Dollar General and Family Dollar stores that are filling the niche.

The building sat empty for a few years, with bright paint and a couple of florescent lights flickering though the increasingly dusty windows from way back inside.  It'd had a glorious beginning, when the old-fashioned, counter-service Kroger in the building on the northeast corner, outgrowing their space, decided to move with the times and open one of the very first self-service supermarkets! 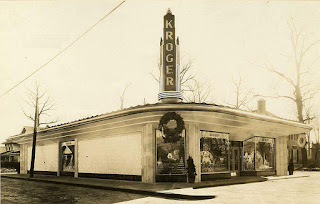 It was a gem of modern design.  Aside from paint and bricked-up side windows, it stayed very much that way until recently -- and the work that converted it to a restaurant largely restored the exterior, turned a few windows into doorways and added a nice fenced garden/patio area right outside the central entrance. 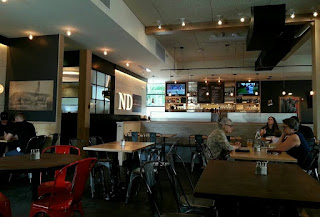 Inside is very up-to-date and features a remarkably tasty menu. 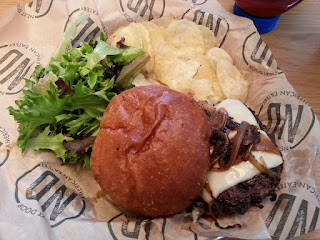 And a few nods to times gone by. 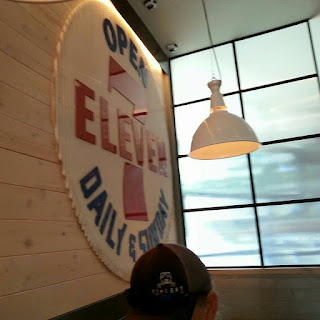