...Right in The Rules, it sayeth: "Thou Shalt Post something each and every day, lest thy three faithful readers abandon thou and depart in favor of the funny pages," and I'm tryin'.

The Great Move continues and completion suddenly seems possible. I even found my spare car keys! But, grrr-dern-it, there is a gun show in town today and I have the itch bad. Maturity, do I really need it, or can I spare a couple of hours?
-- I've been spending some time fussing over the Cat-Mother on every trip to the old place. She's a sweet, feral, little yellow tabby I've been feeding for six years. After a year of free food, she decided to make up to me and we've been pals ever since. She wouldn't be a problem to relocate, but her offspring and constant companion, a white-and-yellow tom, trusts no one. He was pretty wary before he got neutered and became more so afterwards, which is understandable. (The Mama cat, on the other hand, seemed a bit relieved after she was spayed; she earned her name fair and square, you see).
-- As for the moving, in a box in a far back corner of the basement I found my ex's HS graduation cap and gown! Also a loaded Ruger .22 rifle mag and a semi-cool BB pistol. I called him about the cap'n'gown, which he picked up (and I never even saw him -- left it on the porch, next time I looked it was gone). Left the Ruger mag next to it but he ignored it. Somehow the "Marksman Repeater" skipped my mind entirely. Tsk, tsk.

I've got a quarter here that says John Moses Browning's favorite great-granddaughter woke up on the move this mornin' yet again -- but you didn't hear it from me!

Since I had a van anyway, I picked up some insulation to replace the fragile, tattered stuff well-meaning family members took down in my attic during the pre-move clean-up. I love 'em dearly and free help is always nice, but that's work I'd hoped to skip for a year. I need to get that stuff up. It's chilly.

Did Saturday morning's errands on the scooter, quite a treat! Almost didn't make it at the bank, thanks to someone renegotiating a loan at the drive-up window. (Please, if it's a complex transaction, go inside! The drive-up is for those of us who finished our homework already). The city's repaved Keystone so I was 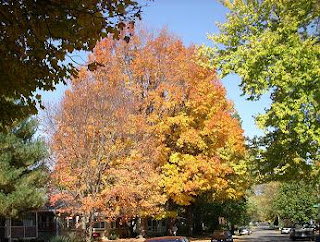 above 50 mph on those 10" wheels -- laugh all you like, it'll still curdle your hair. Turned up my road and there was a maple in full golden color against the turquoise sky, having already totally carpeted the yard it shades. This is why I love Broadripple. (See photo. Colors not to scale. All leaves over 18...weeks).

It has occurred to me that I have some pre-diced potatoes in the fridge, along with bacon and eggs. It has been some time since I indulged in Breakfast Hash, a treat you poor mortals may be missing. And you'll miss out on it this morning, too, unless you make your own. Wish me luck, those store-bought taters are time-savers but not always as good as starting with whole ones.
Posted by Roberta X at 9:15 AM

Fresh Corned Beef Hash is a Food Of The Gods -- but a lot of foods can be "hashed." It's just about a lost art and one I am happy to be preserving.

I like hash, especially if you throw in some onions and chili peppers.

I can see that I'm going to have add A History Of Hash to my to-do list!