The Result Of Our Efforts

...Cos it's not just me down t'the Skunk Works, you know; there's a whole bunch of us and we were all happily diligent geeks today. Once we were (nearly) done, we moved the MC boys out of the improvised control-room in a coat closet they've been in for about a month while still doing the things that keep my paycheck from bouncing, and into the result of all our efforts, this serene splendor: 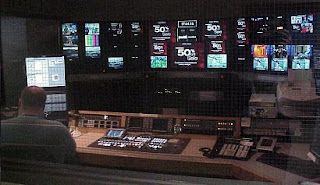 Pretty cool, hey? Of course, my view of most of it was under that console (sans operator, thankyouverymuch), badly lit by glaring worklights, stuck to the carpet-tile glue, fishing around in the computer floor and wiring up various and sundy things. There are times when being the most limber and agile of the techies is not exactly beer and Skittles (nasty-sounding combination, IMO). I'd put up a photograph of that part of the work but A) it's ugly even once it's all neat and tidy and B) the man there is running a TV station or three; it is considered rude to joggle his elbow.

It will be even kewler once it's finished; there's another row of displays below the big three in the background, plus some more flashy lights'n'stuff. A lot of it even has a function, too!

Face it: I work aboard a starship! Or about as close as I'm likely to get this time around, anyway. "Phasers on 'irk mildly' and full warp ahead!"

Email ThisBlogThis!Share to TwitterShare to FacebookShare to Pinterest
Labels: I work on a starship, marvels of science, the wonderfulness of me, things that should not go bang

Oh, and speaking of Starships, in the original Star Wars movie the firing control for the death star was the fader-bar on a Grass Valley 300 switcher.

I am quite certain you are a secret operative. Of course, I could be wrong, which would be only the third time in my whole life.

But when I am wrong, they tend to be doozies....like, I was sure that George Bush had the technology to cause the tsunami that destroyed parts of the South Pacific several years ago, and you see how far of course I was with THAT one....

DANG! That should be OFF course rather than of course!

I can neither confirm nor deny the precise nature of my work. The Division frowns on it. (So do the guys across the street at the Agency but they're pretty much just so many Cub Scouts).

I've worked with some Cub Scouts. You couldn't pay me enough to cross those guys.

That's a great simulacrum of a starship. I'll believe when you chase those TV kids out and kick that bigsumbitch into gear...

Not that you won't, but call first, OK?

'I can neither confirm nor deny the precise nature of my work. The Division frowns on it.'

See, now I'm gonna have to post some pix of the Navcomp core and the phantasmajectors that power the insystem drive and the primaries of the FTL system.

...We've had star travel for some years but it's such a mess out there; there's a lot of clean-up to accomplish....

D. Martyn, I might as well admit that my part of the work often involves termination. Our most usual device for this work is the Bayonet Neal-Councelman, a mass-prodiced precison device. The Japanese make the best ones for termination use.

Ahh, err, I do assume that you are using the term 'termination' with regard to 'terminal' as in air port terminal or computer terminal...right? gulp

As I was saying, I am quite sure your job has nothing to do with anything classified or top secret.

"Those who say, do not know; those who know, do not say."

Well, what if I said, I withdraw this entire line of commentary, which I regret opening up?

So, with a poof, the whole thing is gone, just as if I never said anything at all...

When I was a young man we used 75-ohm terminators, but if the target was big and scary we dragged out the 150-ohm Bayonet Naval Coupler for a more complete termination.

"You using 75-ohm terminators on that?"

"Uh, yeah, sure. Seventy-five, seventy-six, whatever it takes."

The only place that I have ever seen that looked impressive "under the hood" was the TV studio at NASA in D.C. All the cable bundles were held together with that special woven black nylon string; no cable-ties were used. It was obsessive-impressive.

If you change it from "75-ohm terminators" to "75 ohm-terminators" it takes on a certain sinister quality.

Precisely! --Within one percent, usually.

...But in the engine room, we have much, much worse: 100-kiloWatt, water-cooled terminations. That makes even a long-time operative like me just a bit uncofortable.