At least one (1) question came into the ol' Questionomatic 4000 (beta) about how the Alcoves Of Delight and RF on the (former) Banc One tower look. "Cool," that's how. Or more to the point -- 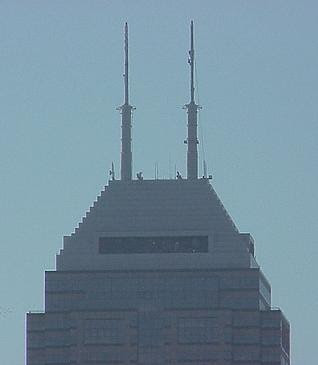 The balcony or alcove I was on day before yesterday is that large dark rectangle. It's at least 15 feet tall.

The right-hand mast is rigged and there may be a tower guy on it. It's difficult to tell. I know there's work (not ours) going on; the Great Father of Riggers and I were sparring over weekend work and he offered me a free dinner (G------'s pizza, one slice) if I'd help on that project instead of trying to get his guys to help on my project. I agreed and countered, asking 200% of my hourly rate for geekery, he came back with two slices of downtown's second-finest 'za, and I suggested 175%. We stopped there - it would have taken us three days to reach a price! 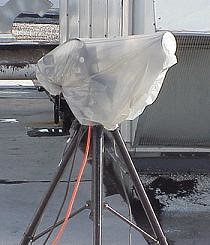 About this, I can say but little. It was part of our "quick fix" the other day. Readers are invited to assume it's got the Weyland-Yutani logo on it and right after I snapped the image, a browncoat scurried into view, ripped the cover off, powered the thing up and used it to blast an Alliance fighter right out of the sky. I'm certain that's what would have happened in a better world!

...We've got gadgets at the SkunkWorks that do have the Weyland-Yutani logo on them. I have not got the Least Possible Idea (TM) how this could be.

(Pix snapped quickly while undoing and/or doing something that may or may not be related to the Adventure -- and you thought the images were hazy!)
-30-

Jeez-o pete, I get that awful tingly feeling in the pit of my tummy just thinking about standing on that balcony!

It's a fun feeling! ...Once you get used to it. Better than flying because there's nothing at all between you and the view. The building is very steady. (Unlike the old Merchant's Bank building, which swayed like a ship at sea!)

I was leaning over the rail, attaching the [confidental item] to the [restricted device] -- darned thing was hanging up on the head of one of the bolts that hold the mount -- and thinking how kewl the view was. Looking North, the city is in a big natural bowl, held before you like a jewel in a setting, a sea of trees with the taller buildings standing out.