...If you happen to have a crate like this:


As it happens, it's very empty. Picked it up years ago from a roadside stand selling used crates near a Navy proving ground and it's just Too Kewl to part with!

Tell you what, if ever my place gets searched and they haul that crate out very gingerly and blow it up, the poor boys are going to be so very vexed to discover they've exploded my old working-the-pole shoes!

What? You want to see those? Sometimes I don't think you boys get out much, if any. 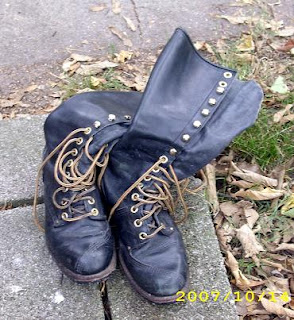 What? They're Carolina Pole Climbers, some of the best lineswoman's boots ever made. Triple-reinforeced toes, nice supple leather, and made all the softer by many years of Sno-Seal and good black polish! Almost knee-high, too.

Just the thing for doing outside work of a vaguely-describable sort in bad weather for my bosses at the Skunk Works. (Not to be confused with The Skunk Works, by the way, or the Skonk Works, either). I came by them honestly; when I bought them, I was climbing poles for a cable TV company.

After a whole Summer of that and part of the Autumn, I came to the conclusion, reluctantly, that there is a limit to how far I'll go to prove a point and better ways to earn a living. Some jobs really are "man's work" as far as I'm concerned, and y'all can have them. It wasn't the poles, that part's fun. It's the mud. In the better districts, all those horriawful unsightly wires an' things are buried and it never fails -- when you have to get at said nasty ol' wirings, it's either raining, been raining, or somebody's broken a water pipe. And the householders want their MTV (and HBO and high-speed Internet and telephone and on and on) right the devil now! The only consolation is that once it's all fixed and everyone has their pr0n cable TV back, you get to go walk on their carpets in your muddy, muddy boots. Heheheheh.

Email ThisBlogThis!Share to TwitterShare to FacebookShare to Pinterest
Labels: marvels of science, tactikewt, things that go bang, things that should not go bang

Get out much? Why would guys go out when they can sit home and think about you wearin dem boots?
Fantasizing about you tracking up the carpet. I'll bet some of those customers de-synched their cable boxes on purpose.

So for the top of the RCA dome, do you wear them higher? Or just lace them tighter?

Don't be silly; we use pogo sticks on the top of the RCA dome! Biggest air mattress in the world.

Ummm, you're fantasizing about me tracking up the carpet in mean-lookin' work boots? eeeep.

Guys used to complain about bad signals on the TV in their bedroom. If they were creepy, I'd go in with my meter, have them hold their TV ("Gee, Mister, it's in the way of the cable wire and it is so heavy..."), take the measurement and be headed out the door saying it was okay before they realized they'd been left holding the telly! Gosh, some of them had large televisions. How sadly awkward.

Well beyond a day late, and a much more than a dollar short, but I got a pair of those same boots! Real comfortable, hard to break in though.