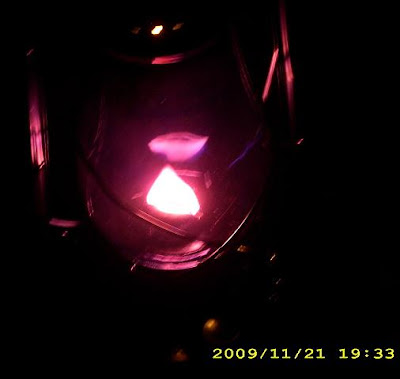 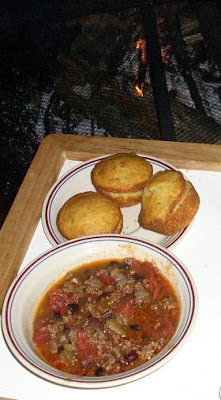 Ended Saturday with home-made "cowboy beef and beans" (which we are not to call "chili") and double-egg* cornbread muffins with chives and a hint of red pepper, served on the patio in front of a fire with a blacklight kerosene lantern. Ummm-hmm!


"Blacklight kerosene lantern?" It sure looks like one: the globe is dark blue! The flame, however, is more violet than ultraviolet. Pretty kewl!

Update: So, how do we end up with that meal? It starts with a little cumin, some Cajun seasoning, a dash of black pepper and maybe a little red pepper (YMMV) but mostly, a big ol' lump of ground round:

(Note muffin tin balanced atop oatmeal boxes. We'll get to that later) 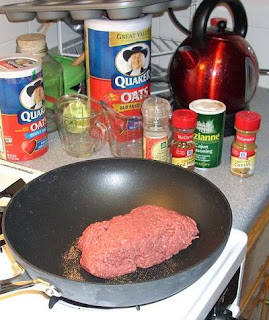 I'd've done stew meat but I didn't feel like taking the extra fifteen minutes to cut it properly -- nor the extra twenty to get it tender. 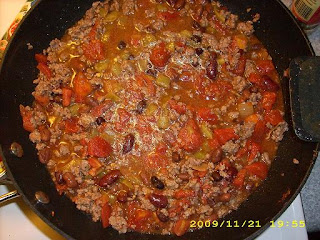 Once the beef is browned, add some Ro-Tel and Red Gold "chili-ready" tomatoes, some hippie organic three-bean mixture (it was what we had) and a nice little can of diced green chilis (not so spicy-hot themselves -- but the Ro-Tel diced tomatoes we had were Here For Business, with lime!) and simmer while commiting acts of cornbread. (In three acts).

If you were wondering, the green bits would be chives and I used olive oil instead of plain vegetable oil -- I like the flavor better. Brand-new muffin pan, nice and heavy. Worked well. 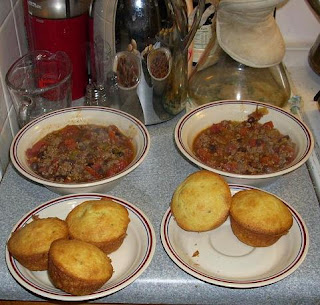 Email ThisBlogThis!Share to TwitterShare to FacebookShare to Pinterest
Labels: Food, marvels of nature, the wonderfulness of life

Sounds awfully good to me....

C'mon, even in Texas which wrote the rules on whether beans go in chili or not, we still are allowed to call it chili if you put beans in it...so long as they aren't Lima!

As for cornbread falling apart, best recipe I've found is the one on the package of Aunt Jemima cornmeal. Mmmmm, good! It won't fall apart until day two, I'm told, but there's never any left to test.

Ed: fine, you convince Tam it's still chili after the beans go in! I didn't even bother to try adding elbow mararoni. ;)

Tastes the same no matter what you call it.

Food...Food, and nobody invited me. I'll call it anything you like as long as I get to eat it.

You, dear, lovely lady, incite my hunger. Such a fine repast would call for an equally fine cigar.

You sure it's a black-light lantern and that the globes just not covered with smoky residue from too much use and not enough cleaning?

It's brand new, deep purple by reflected light and blue by transmitted (sun)light. You tell me what they were burning in it that caused that and I'll go with your theory.... ;)

Jiffy mix makes an edible cake, but WAAAY too sweet to be cornbread.

Uh hua, and if folks had listened to me about how to fix the timer on Brigid's oven...

+++ for the RoTel. Beef and beans is always better with it added.

Here in NM we are agnostic on beans, but canned chiles just might send us to bed with an attack of the vapors...

Some brands will do that....

I'm happy to find 'em canned; fresh chili-type chilis are not common. Jalpeno, habanero, poblano and Anaheim do show up but that's about it, and I don't get along well with the first two. This was a what's-in-the-cupboard dinner and it worked out.

Poblano and Anaheim are both fine for chili; just slice, simmer, and fish out before serving.

Or put whatever the hell you want in there. I'm just amused at the regional differences in what people make a fuss over.

"Fish out?" I can see doing that with the poblano, some of them are kinda sizzlin', but Anaheims are fairly mild and cook up nicely.

"Regional differences," oh, you have got to have church carry-in dinner chili to really get it, a hearty, filling combo of ground beef, tomato, possibly a bit of onion, kidney beans and elbow macaroni. If you want it spicy, there's salt and pepper on the table. It actually is good but chili lovers cry over it much the same way folks cried when Turner colorized classic movies. Is it chili? I spoze it is if folks'll call it that.

Removing the chile slices is more about texture than it is about cutting down the heat level; a long simmer means most of the good flavors have already departed the fruit and melded with the chili, and I personally don't find the texture a nice bite unless I'm eating a relleno.

If there's no chile powder in the pot, it ain't chili so far as I'm concerned, but that DOES sound like an awfully good meal in its own way.